Here is a TAB for the shapes on the G & B strings.

Take these shapes and spend time playing them as before – moving them around, ascending and descending the neck. As before, listen to the sounds. Then begin exploring and having fun. Again you can play a drone note or a simple bass pattern on the open D string. And, of course, once comfortable, play with them to a backing track.
To begin with you may simply want to slide up and down … something like this demo.

TAB for the mp3 sample: 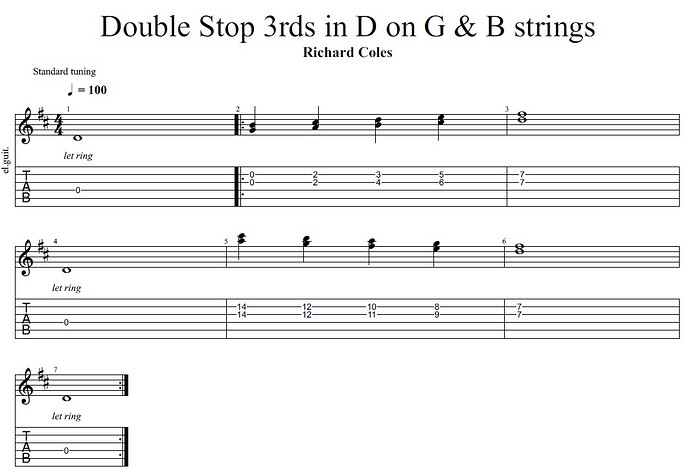 As before, you do not need to play these 3rds as double stops.

TAB for the mp3 sample: 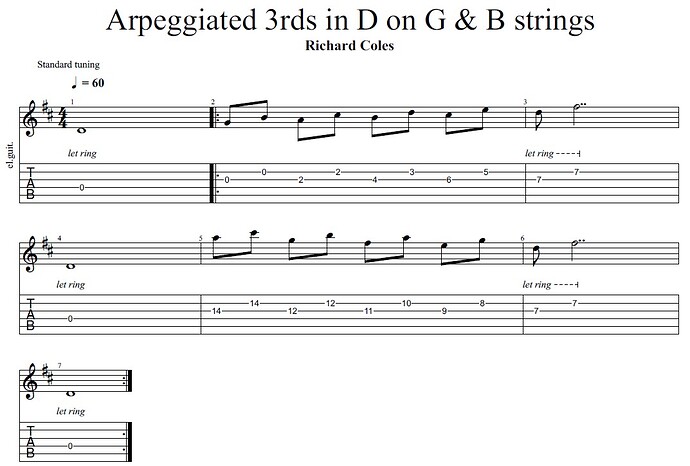 Brain’s a bit fuzzy from when this was last covered but the double stops are R/3 or R/b3 in respect of the Key diatonic chords ? That’s what I am seeing from an interval shape perspective but its been a long day.

@TheMadman_tobyjenner Fun indeed Toby. Thanks, as so often, for checking in and playing along. There is some explanatory stuff over the horizon for sure. Majors & Minors? Could be.

Looking forward to it, as I’d carried this over in my schedule from the old post.

Here is the TAB for the shapes we need.

Hang on … they look very familiar.
The same shapes as on the B & E strings but in different positions on the fretboard.
Mmh. That’s interesting.

Tab for the mp3 sample:

Once again, you do not need to play these 3rds as double stops.

TAB for the mp3 sound sample:

Are you having even more fun? You should be having fun to the max by now – this is great stuff!

And we’ve only just begun … there is much, much more to come.

Some more prompts and suggestions as to how you might shape your further adventures.

You could try using the backing track when doing all or some of these.

You could use a different backing track … perhaps this one next: Lovely backing track and such a nice resonance on the D & G strings. Found a nice little box in between frets 2 and 4 to play the first progression across e to D, then frets 4 to 7 D to B for the “chorus”. Now back to modes.

I think this is really great, and have come across it in several songs in the last few weeks…it took until the day before yesterday before I realized that the note pair on string E/B d/fis (2 /3) is the same as B/G d/fis(7/7) as (11/12) etc etc…,that felt like a discovery, even though I did my theory course, this penny didn’t drop for a while…if I type too much now you have to delete this @Richard_close2u …or is it so obvious that it’s just me and I’m a bit slow?
Anyway, Thanks

@Richard_close2u
Richard - hope you don’t mind me adding a couple of BTs from the same source, just to give a different flavour but staying within the realm of D ?

First is B minor but its the same chords a the Key of D Major if folks are wondering, for some moody laid back noodling.

Seconds is another in D that ups the tempo a tad.

Hey @TheMadman_tobyjenner fill your boots and knock yourself out. The more cool and useful backing tracks people have to explore these golden nuggets of musical wonder the better.
Although … you are a naughty boy and you know it … sneaking in a bluesy relative minor backing track and anticipating things that are yet to come!

@roger_holland
Hi Rogier - what a lovely discovery to make … the octaves that repeat and repeat … notive when you play and compare them that although they are the exact same ‘notes’ they differ substantially in ‘timbre’.

Although … you are a naughty boy and you know it … sneaking in a bluesy relative minor backing track and anticipating things that are yet to come!

Apologies for jumping the gun. I never got past the posts explaining the basic patterns on the old forum and had bookmarked the topic for further exploration, so was not aware of how it developed but naturally am interested to follow the resurrection.

Tried to redeem myself with some additional BTs in plain old D but ended up in a Southern Rock BT rabbit hole with lots of modal delights but sadly no Ionian.

Anyway, enjoying finding positional approaches across the 4 strings covered so far and finding some interesting links.

Tying in with your earlier comments about ‘nice little boxes’ …

enjoying finding positional approaches across the 4 strings covered so far and finding some interesting links.

@TheMadman_tobyjenner That is music to my ears Toby - metaphorically speaking, and hopefully literally in yours!

I noticed… ,as everything sounds a little (and sometimes a lot) different in a different place…I was so happy that these Thirds helped me to discover more on other strings a little faster, than just on the e, b and g in single notes ( on the e,b and g string) in which pattern i playing and with double notes, that i didn’t get to explore any further or the obvious things

Thank you for this lesson, it’s a useful complement to the major/minor triad lessons over on the website.

@Jozsef
Thanks for jumping aboard and beginning to explore and have some play time fun.
Both your observations about triads and about the sound over chords / roots will all connect with further aspects I will be adding to this topic along the line.