In Part A of this topic, I closed with this post - some suggestions and prompts for using the 3rds over backing tracks.

Hopefully you have spent some time on that.

Yes?
Have you done so with a critical listening ear?
Given that the backing tracks have other instruments and a filled out chord progression, what are you noticing as each chord comes along?
Do some of those 3rds sometimes sound beautiful and harmonious over some chords but not others?
Do some of them sound jarring and dissonant if you rest on them over a certain chord?
Mmhh.
What’s going on here?

So far I have been referring to these pairs of notes on adjacent strings using the term 3rds. Whether played as double stop 3rds or arpeggiated 3rds, the name has been the same. That has been a deliberate and consistent choice. As we now move into exploring some of the underlying musical concepts in theory, we need a means of differentiating between two almost identical concepts - which I will do by using the terminology 3rds and thirds.

Up to now the whole emphasis has been on making the shapes of 3rds on your guitar, exploring, having fun and playing music with them. We next turn our attention to thirds as opposed to 3rds. A journey which will eventually loop right back around to 3rds again.

This first paragraph has been added in response to feedback and questions by @davidp and @roger_holland and @sclay below.

So far, I have been using the abbreviated form of 3rds. I use this to mean a shape you play on two adjacent guitar strings, either as a double-stop or as two arpeggiated notes. Think of this as a physical hands-on musical thing. Below, I will be using the name third(s). Put simply, a third is an interval, a measure of musical distance, between any two musical notes. I use the long form and the abbreviated form to make a small but important distinction between two seemingly identical things.

Additionally, the word ‘third’ is also used to define the middle note (the 3) in a major (1, 3, 5) chord or a minor (1, b3, 5) chord. I will make efforts to avoid calling those middle notes thirds and refer to them as the numeric term 3 only. Be aware however that they are conventionally called thirds due to their importance within the context of the chords.

In the western system of music notation, the first seven letters of the alphabet are used to provide names. If we line up these letters in alphabetical order we have:

If you select any letter at random, it would be your start point - the first.
The next adjacent letter would count as the second.
The one after would be the third.

If you were to start at F or G you would need to consider that the list repeats - as these notes repeat in ascending and descending directions (higher and lower notes).

Now that we have a simple concept of interval naming, we need to broaden it out. Of the seven lettered notes, five have sharps / flats so we must apply the system to the totality of all 12 notes in western music. We need to look at the note circle.

The Note Circle shows all the 12 notes that exist in Western music. 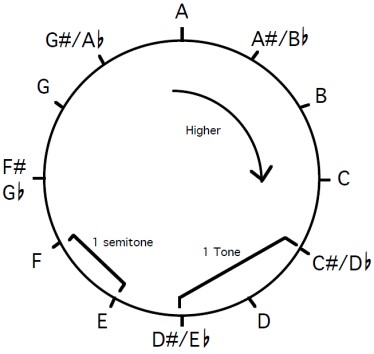 Moving clockwise around the circle takes us to notes higher in pitch and vice versa for anticlockwise. Note pairs E & F and B & C have no note between. Notes that can take two names are called enharmonic equivalents (G# = Ab for example).

The interval of a semitone is the smallest step on the guitar and is one fret. The interval of two semitones makes one whole tone. These two intervals make up scales.

Returning to the three examples above, the note circle highlights a crucial concept. The distances between the named pairs are not all equal.

All three intervals are thirds yet not all represent the same distance between musical notes.

Next, we will look at connecting these pairs of intervals to the Major scale and to chord construction.

This is shortened to:

The D Major Scale is a good place to start as we have been playing 3rds in the key of D.

Each of the seven notes in the D Major scale can be a root note for seven chords. All these chords would be within the key of D Major and all would be made up of notes from the D Major scale. This involves a little look at chord construction and a process called Harmonising the Major Scale.

Constructing a D Major chord from the D Major scale

Simple Major and minor chords are built from only three notes - their root (first) plus two others. These two other notes are found by counting along a scale pattern and choosing the note at an interval of a third from the root, then counting from that new note another third. This is easy to see by returning to the seven notes of the D Major scale and forming the D Major chord.
Here, and in subsequent chord constructions, we see a doubled D Major scale. The process to create the tonic D Major chord from the D Major scale is simple:

We will now work through the entire process of harmonising the D Major scale to create all seven chords within the key of D Major.

We will return to 3rds and playing and the practical side and the fun somewhere further along … but there is a little more to explain and connect together first.

Having looked at the Major scale, chord construction using ‘stacked thirds’ (the Root, 3 and 5) then harmonising the Major scale, we will continue the journey with a look at open and barre chords, barre chords and triads, then triads will return us back to 3rds once again.

When learning our first chords we learn open position chords. We learn five Major chords, E, D, A, C and G. The shapes / patterns of these give rise to what is called the CAGED system. We also learn three minor chords; Em, Dm and Am.

Playing those chord shapes away from the nut, using only fingers 2, 3 and 4, and with the index finger barring across the strings behind the shape, gives rise to movable barre chords. All barre chords are derived from open position chord shapes.

All Major and minor open chord shapes (and hence the barre chords too) contain one or more triad shapes. All triads are the smallest possible shape that can be played as a Major or a minor chord, containing the three notes first, third and fifth.
We will now look at the barre CAGED shapes for Major and minor chords, simply to see these diagrammatically 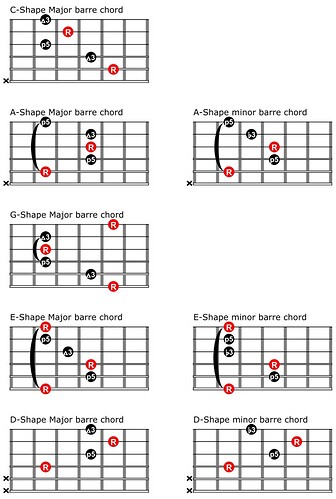 The intervals are shown on each diagram.
Key:

Additional notes in response to a question / feedback raised by @davidp below.

Note the similarities and differences.

This diagram show the intervals described. Also we now see assigned the ‘flat’ symbol to the 3 of minor chords and to the 3 and 5 of diminished chords. 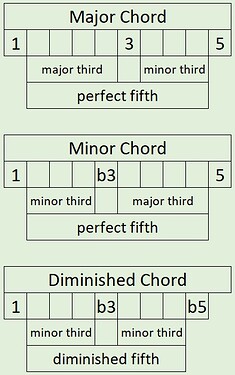 Next we will take those barre chord shapes and pick out the triads within. For simplicity I am going to restrict this to only triads found on two sets of three adjacent strings, either on the D, G and B strings or on the G, B and E strings.

CAGED Chord Shapes and Triads Within 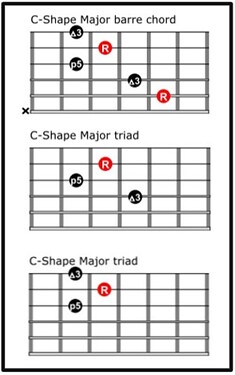 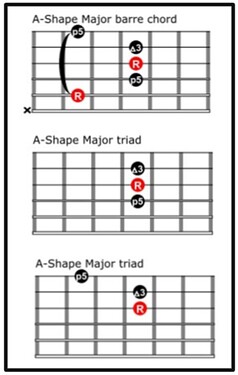 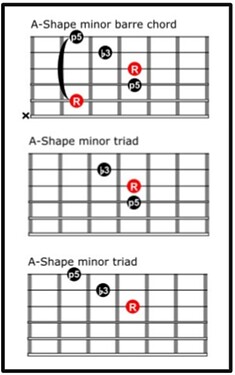 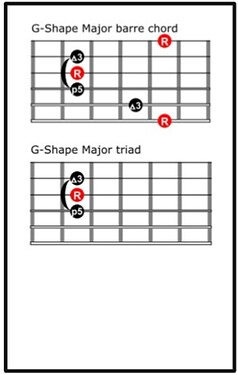 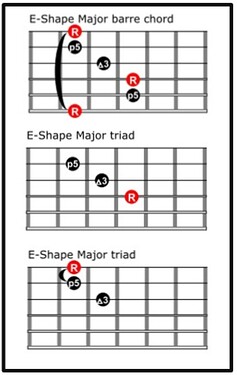 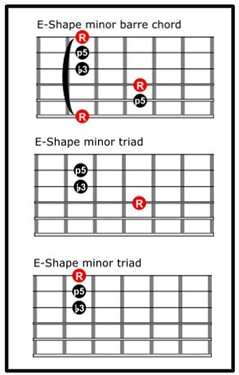 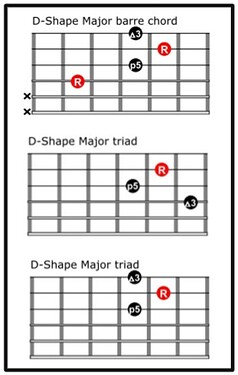 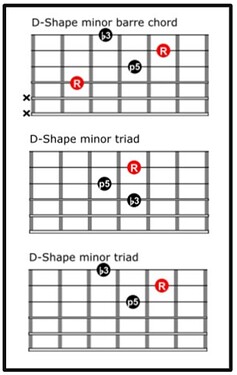 You may notice that the D-chord Major and minor triads are not perfect overlays with the CAGED chord form but steal one note from the C-Shape chord which lies just ahead as you move along the neck. This may seem like cheating but … hey ho.

We shall return to this later in the topic.

Something else…
This section (Part B) contains a lot of information. For some of you it may be a simple stroll along familiar paths. For others it may be new and difficult to comprehend and take in at first reading. Therefore, it is time for a short pause in the forward progression through this topic. Take time, re-read where necessary, read it with your guitar in hand to connect words and concepts with actual sounds of notes and chords and triads. The next few steps we take in Part C will contain the ‘big reveal’ that takes us all the way back to the beginning of this venture … knowing and playing the 3rds shapes on the guitar.

Please, chime in with comments, questions and thoughts.

Hi Richard,
I learned this a while ago in the theory course, and I decided to read it all the way through here, but I think this is all really well explained, and it seems clearer than the big boss has done SSssst,… but I want to say right away that I have not looked back so maybe I am wrong( after a while as you say ,things just get clearer faster) … this will in any case make a lot of people very happy…

Only suggestion I’d make is to add a footnote to the legend when you mention ‘perfect fifth’. You snuck that one in having been discussing Major and minor thirds.

I may also have missed the part where you explain 3rds vs thirds? On the face of it I am not feeling too happy about that … but ‘hey ho’