I think your playing is developing well from your AVOYPs. You’ve got a good sense of timing and rhythm, which makes me think you must have a critical ear for your own playing. Being able to notice what you need to work on yourself.

I reckon quite a few of us in the community work in IT/software - seeing as we’re on computers all day it makes it easier to participate.

Thanks for saying that, some days it feels like my rhythm is great and others I’m like “Why the hell can’t I get this right?!” Lol. Metal Rhythm guitar Vol 1. goes deep in timing and how rests work so it’s been helping a lot.

I have noticed a lot of IT/Software folks here as well. Seems like work from home and working on computers is a perfect combination to start playing guitar!

Had a quick peak to see what a Mac Studio is … wow, that is quite some PC.

It’s is definitely overkill for the work I’m doing haha, but it is replacing an expensive gaming PC and I didn’t want a downgrade. I was considering a Macbook, but remembered the Mac Studio from when they announced it. The Specs blow similarly priced Macbooks out of the water so I thought screw it and pulled the trigger.

My favorite part of this website/community is getting to see others on similar journeys to me progress and be inspired by their AVoYP posts. I really think I would not have stuck with it this long without it!

I have noticed a lot of IT/Software folks here as well. Seems like work from home and working on computers is a perfect combination to start playing guitar!

cough, cough I have no idea what you mean there Alexis…
Mark - IT home worker from the UK…

cough, cough I have no idea what you mean there Alexis…

Ha! In the immortal words of DJ Khaled:

….or when I’m waiting for a script to run……or for someone to get back to me……or, okay fine I sometimes work in between playing guitar.

I sometimes work in between playing guitar.

How it’s been going:
On month 2 of Grade 2 consolidation and I feel like I’m steadily making real progress. I’m continuing my Rock Study using Justin’s Rock song book, I’m on song 4 La Grange which I’ll speak to more below. I’ve also been slowing moving forward in Troy Stetina’s Metal Rhythm Guitar method which I’ll also speak more about below. It’s been great going through these 2 at the same time because when I feel I’ve hit a wall in one it seems like the gives me a sense of momentum. I dread the day where I hit a well on both, hah.

What I’ve been Playing:

The Plan:
Focusing on chapter 3 of Metal rhythm and guitar and La Grange for my rock study. La Grange is probably the hardest song I’ve ever attempted to play (at least play the whole rhythm part). I’m going to keep pushing through and I do feel like I’m slowly getting it. The next song after the is In Bloom by Nirvana (one of my favorite bands!). I’ve been playing that song pretty well since the rock module in grade 2 so I think that shouldn’t take too long to get. So I don’t mind spending some extra time with La Grange to get it right. Anyway I’m getting super close to my planned end of Grade 2 consolidation (3 months), yay!

Great update Alexis. You’re development is coming along really well. You’re really nailing the foundations down. I wouldn’t worry so much about deadlines for the consolidation period as from what I have seen your not just consolidating the skills you have learned in the previous grades but you’ve continued to learn new things through your JG rock studies and Troy’s material. I’d just move on when you feel you are ready and/or need new material to keep your practice sessions fresh.

You’ve inspired me Alex, I just went and ordered the Rock Songbook and I’m going to do the same thing you are and learn all the songs

. Although I don’t think I’ll post videos of them all, that’s your thing.

Thanks for another inspiring update, Alex. You are making progress and growing as a player with every project and song. Keep on rocking.

I’d just move on when you feel you are ready and/or need new material to keep your practice sessions fresh.

Yeah at this point it’s definitely an arbitrary date as I do feel like I’ve consolidated most of the parts of grade 2 that I’m aiming to consolidate (basically all the rock stuff, F chord, some bluesly lead stuff). I did want to go into finger style a little but there is just too much interest in the rock stuff.

I’m going to keep on waiting for the 3rd month simply cause Grade 3’s not finished yet and the longer I consolidate the less chance I’ll catch up and have to wait for lessons lol.

@jkahn Awesome that you’re purchasing the book! It’s so weird cause most of what’s in there Justin already has lessons for free on the website but there is something about going through a physical book that really resonates with me. And then there are some songs that justin doesn’t have lessons for on the website but does in the book like If You Tolerate This Your Children Will Be Next. It’s really great range of songs that cover a bunch of different Rock Genres.

I did want to go into finger style a little but there is just too much interest in the rock stuff.

I think there is time later for that to be honest. I think Grade 2 was more of an introduction to fingerstyle as I’ve had spend time learning outside of the Grade 2 material. I have to admit I’m eager to see you playing something else with that new acoustic guitar that you got yourself. Likewise you’re probably eager to see me playing something on that electric that I got myself.

Awesome that you’re purchasing the book! It’s so weird cause most of what’s in there Justin already has lessons for free on the website but there is something about going through a physical book that really resonates with me.

Funny I have one of the beginner songbooks but I never use it. But the rock one looks like a linear progression of difficulty and a list of songs to learn, which appeals. Quite a few times recently I’ve jumped into songs that are a bit beyond where I’m at right now. So the progression kind of appeals. Also I want to learn more electric songs, I play my acoustic more than electric but the kind of music I listen to is usually played on electric

I want to learn more electric songs, I play my acoustic more than electric

Likewise you’re probably eager to see me playing something on that electric that I got myself.

Yeah, I don’t think we’ve seen anything with your ES yet! it’s criminal, that beauty deserves to be heard!

So the progression kind of appeals. Also I want to learn more electric songs, I play my acoustic more than electric but the kind of music I listen to is usually played on electric

Yeah, there is definitely something to the progression of songs. I’m having some trouble with La Grange but I’m confident that I’m at the level to play it simply because Justin put it in this section of the songbook. It’s good to not have to keep asking myself if I’m ready to play this.

similar to you guys I feel like all the acoustic songs I hear around here makes me want to try out an acoustic song or 2. Maybe when I get a mic good enough to record one, I’ll take a quick detour and play/post one.

criminal, that beauty deserves to be heard!

It certainly is mate. That shall have to be resolved.

there is definitely something to the progression of songs

Yes and its a true marker of progression. Quite a few of the songs in those books are really for progressive beginners. If you look at the video lesson category you will see some are labelled grade 3/4. So if you think about it you’re actually playing beyond grade 2 level. Now that’s an achievement to note in your learning log.

How it’s been going:
Consolidation complete! I’ve been consolidating for 3 whole months! It feels like longer, mostly because I’ve played and learned so much since finishing grade 2. I’ve learned, preformed/recorded, and posted 8 rock songs in my consolidation months.

What I’ve been Playing:

New Gear/Purchases:
Bought a new songbook! I wanted something that I could work on separate from Troy’s main method and Justin’s rock songbook. Something from a specific band. So I chose one of my favorites, the Foo Fighters: 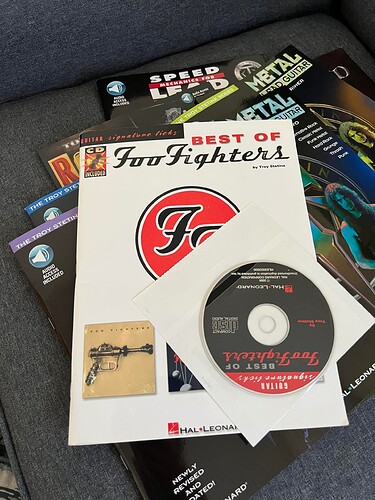 I’m usually weary of tab books since I’ve heard they can be inaccurate but these were actually transcribed by Troy Stetina who I trust did a good job. These I’ll take slow, do a song if I get stuck on one of the main things I’m doing.

Bravo and congrats, Alex. Enjoy grade 3 and your ongoing rocking out.

Congratulations Alexis. You should be really proud of how far you have come along. Yes, tab books can be inaccurate, just trust your ears. Enjoy Grade.

Hi Alexis, well done completing Grade 2, paving the way as ever!
You’re obviously keen to get going in Grade 3.
Go for it!
🎸 David