Adding to what the other users have said, I tend to pick songs that I love but that have something new or different compared to the ones I’ve worked on.

For example, this week I may be focused on a fingerstyle song, next week on a chicka boom rythm one, or one with very energetic strumming, or one with some note picking…

At this point there are so many songs on my ‘to learn’ list that it just depends what I’m in the mood for. I like learning songs that I know and like, but I’ve also added many songs to that list that are new to me that I hear from somebody playing it here in the Community. If it’s a fairly easy song I will play it for a week or two until I learn it, then add it to my Songbook and play it occasionally. If I’m going to a friend’s for a Music Night (or hosting one) that’s usually planned a few weeks in advance so I go through my Songbook, pick some songs, and then brush up on them if need be. If I’m learning something that’s fairly complicated though I often work on it for a few weeks then set it aside, work on something else, come back to it again, go off it again.

The ‘Songbook’ I’m referring to is the Songbook app. That’s an ongoing project too, as I don’t have all the campfire songs that I know in there, and I don’t have it sorted very well for songs I’m still working on, and songs I know. I make lists in my Music App of songs I’m working on / would like to learn as well, and then I listen to them regularly. My Guitar 2022 playlist currently has 190 songs in it. I’ll never learn some of them I’m sure, and I definitely won’t learn them all in 2022, but when I’m looking for something to learn I go check that Playlist and pick something that strikes me at that moment.

You’re lucky Mari. My friends just send me text like the one I got this morning.
Most of the time it the same day. I also have the songbook App love the edit feature on it
really easy to use. 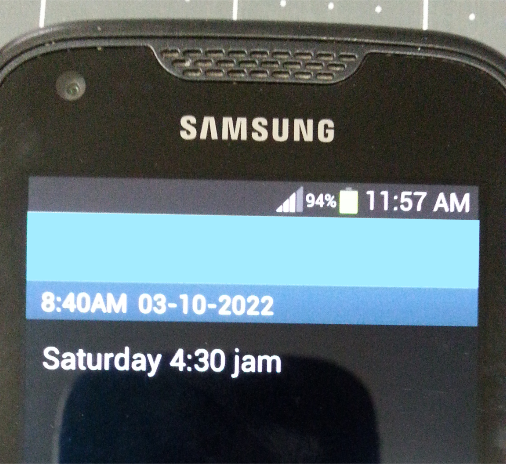 Songs x3 is universally accepted here and I’m not inclined to fight city hall. If that suits you, then do it. Just know there are other ways to roll. It’s easy to get bogged down playing songs.

Learn songs, and learn the chords in the key. If you learn “Three Little Birds”, you missed a lot if you didn’t unlock the fact that you learned a I-IV-V progression that is easily transposed to other major keys, and is the basis of a multitude of rock, blues, country and folk music. This is bed rock learning that you can build on.

Tbh Rick, receiving that message even with six months notice wouldn’t help me much

I’m always on the lookout for songs to learn. When I go to either a festival or a musos jam, and I hear a song that appeals, I write down the name of the song and later look it up. Probably only 5% of those I research become songs I try to learn.

There are times when the low hanging fruit songs only take a few days to get memorized and working well. My hardest challenge song took me 8 months to learn and was so worth it.

I am like the kid with eyes bigger than his stomach. Sigh. I will get to a few of them, I am sure…

I’ve picked a few …cough…songs myself from the songbook of this site, many I play far from completely, there are some that I look for a long(?) time and pick out and that I play better and completely ,and most of the songs that I practice are the new songs that Justin keeps releasing, so I learn a bit from everything, and is it really too difficult or cr…py music… well i will continue with something else,…although I am the last few weeks I’ve been doing less with it, because boy oh boy, he plays more songs than I have the time to listen to them,… almost…just ridiculous.
And by the way,…I’ve only been practicing some more songs well recently,…I was more busy with exercises on other things,sssst don`t tell Richa…
Good luck, and a lot of fun playing songs…

Thank you for the replies everyone, your input is really appreciated.

I have to admit there are some songs I love and have tried on the guitar and I’ve just not enjoyed playing them at all.

I think for all the songs I would love to learn I should have stuck with my guitar when I bought it back in 98.

I’ll keep trying songs I love and if I don’t enjoy them, instead of sticking with them I’m going to throw them away and try others for now.

@Mari63 what is this “songbook app” you speak of Mari?

@brianlarsen thanks for the song link Brian but though I enjoyed it, not one I would want to learn, I think. Edit The Trio+ is on my to buy list.

@Richard_close2u your link has now given me today’s earworm, which is Paul McCartney & Wings - Band On The Run (Official Music Video) - YouTube

Some of the songs that I have been working on I have been introduced too while working through Justin’s beginner course, some have been introduced to me by my guitar teacher friend during our zoom sessions and some are songs that I like. The result of all this is that I am probably working on way too many songs. I tend to work on two or three at a time, allowing them to grow with me as I improve, rotating through my repertoire, changing them around each week unless I particularly need to work on a song some more to nail a particular part of that song.

@SgtColon Hi Stefan, it’s an app I use to manage my digital songbook. I have a bunch of songs on my computer, I put them in Dropbox, and I sync Songbook to Dropbox. It makes my song library portable, because I’ve got everything on my iPad (iPhone too, but that’s a bit small for playing!). It also has some cool features like scrolling - if the song is say 4 minutes I set it to that and then the words and chords or tab roll along at the speed necessary to play the song at that length.

You can have word, text and pdf files in Songbook (possibly others, not sure). I don’t usually use pdf files because those ones don’t scroll. I generally either copy in songs and chords from an online tab site, or export a song from Guitar Pro to ascii format and then import it. That’s generally how I do any songs that have tab in them. (Although I did spend an excruciating period of time writing out the tab for Here Comes The Sun note by note in a text file!!)

I find it to be a great app, very useful. I think I paid about $10 Cdn for it, well worth it. More info at LinkeSOFT SongBook Your lyrics and chords on iPhone, iPad, and iPod touch 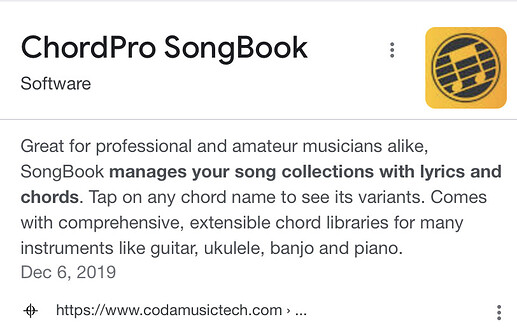 Lots of wisdom in what @CT shared.

My interpretation is ultimately to not just learn to play songs in a rote fashion. As you develop, progress and lay down your foundations blend in understanding theory, training the ear as you continue to learn songs to practice what you are learning.

Feel no pressure to do this necessarily from day one, guard against cognitive overload, as we always say it’s a never ending adventure, beyond a marathon, definitely not a sprint.

Biggest issue for me is that my favourite bands all feature 2 if not 3 “lead” guitarist and the tracks are so heavily layered, so parring them down to a simple one mad man and his guitar is always a challenge.

and there is the crux of the biscuit! I continue to torture myself by wanting to capture more of a song than my current abilities allow. I practice simpler versions of some songs but will not play the songs for anyone else until I have integrated enough of the complexities to please me.

these days learning the core rhythm of something new does not take very long. Synchronising the singing and learning lyrics take longer,

This is so true. Even though my singing is at best sub-par, the real enjoyment for me comes when I can play and sing the song. I hit brick walls every now and then with songs I know the lyrics of very well but applying chords in time doesn’t always follow. Practice, practice, practice…

I hear you Rob. It was what led me to open the door to multi-track DAW recordings and the fact that I could not sing and play at the same time.

So what I would do in terms of learning others songs is don’t necessarily try to replicate the “recording” of the song. As you say Toby it’s going to be layered and produced so even for a full band it’s going to be difficult to reproduce. What I tend to do is look at how they perform the song live…that usually reveals a much more “doable” version…which will sound as good. Also don’t be afraid to look at how others have covered the song as that’ll also give you ideas on how to perform a good version yourself. Youtube is your friend in these situations.

I always say we play covers of songs but in our own interpretation and style. You need to make it your own song.

I always say we play covers of songs but in our own interpretation and style. You need to make it your own song.

Great advice, Jason. My goal is not to play technically correct covers but to play the song as I interpret it. Sometimes that is very close to the original and sometimes it is quite different, but the feel and message need to be there. That is why my few AVoYP submissions always begin with me stating ‘this is my interpretation of…’

@Mari63 Thank you for that Mari, it sounds really good. I’m going to have a look into that.

@Rossco01 Jason, that is a brilliant piece of advice. Thank you.

Interesting about the singing. I am not a singer. Sometime I will get the nerve up to try. My fear of singing pushes me towards finger style and classical where the piece can stand without singing. A lot of the basic rock we are using to learn rhythm and cords is not that exciting by itself and really benefits from singing along, if the goal is a complete musical piece.

Divide songs into three categories. And try to be learning one in each category at any given time.

1.) Campfire/BBQ songs. Songs everyone knows the lyrics to and can sing along with, but are just basic chords progressions.

2.) Recognizable guitar songs. These are songs you can play on your own without accompaniment and people would recognize it. Because of a riff, or interesting rhythmic pattern. They maybe somewhat difficult but not impossible with your skill level at the moment.

Some examples might be Norwegian Wood, Hide Your Love Away, Over the Hills and Far Away, Better Man, Time of Your Life (with the picking), etc.

3.) Player songs. Kinda the same as above but much more difficult. Songs you have to spend a few days learning one bar. It might take a year or more to become anywhere near proficient.

Think songs from Tommy Emmanuel like Classical Gas, Angelina… or Clapton’s version of Hideaway. Could even be something classical or jazz.