I played this one on Saturday for a friend and it made him smile. This is a rudimentary version of Selena’s hit song. Very sad her life ended so early. She would have been about the same age as me. 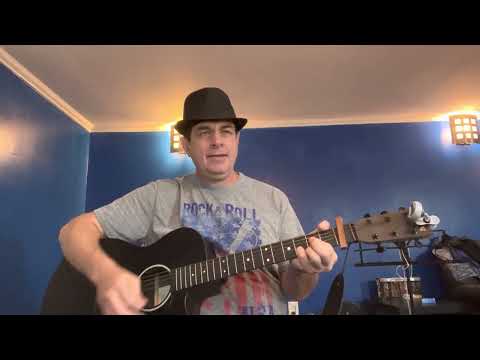 I hope it makes someone else smile too. This is my first time singing in Spanish so don’t laugh too hard lol. Thanks for listening.

Thanks for the comments and nothing special was expected. Most here have probably not heard of the song. I need lots of improvements before I can share anything significant lol. Have a great day.

Did the tempo pick up midway?

The tempo is supposed to be different in the chorus as compared to the verse. I probably didn’t get it right though. I played this song for a friend from Mexico to prove a gringo could actually do something in Spanish. I played it again for his father yesterday and he really enjoyed it as well. It was mainly for a few laughs.

Since you are here, I have a question. Do you have any tips for improving strumming patterns while singing and playing? Everything I do is always basic strumming. I can play through a song no problem with complex strumming if I stay quiet and just do instrumentals, but throw in some lyrics and my strumming falls apart if I get too complex. I have seen Justin’s video series on it, just hoping for new ideas. Tomorrow morning I am trying out a private lesson locally and will ask that same question. I went to a class last Saturday with a friend and the intro to guitar was too basic for me. Justin already covered all the basics for me so I negotiated trying a private lesson to test the waters. I ended up helping teach the young students and giving away my guitar picks instead. I feel stuck lately and making no progress in my mind. I went back from level 3 to review level 2 to see if there was something I need to work on. I know the general answer is practice practice practice. Thanks for stopping by and have a great day.

Hi Jeff, nice try with Como la flor. I just heard the original record and a strumming like the original song can be somewhat hard to play. About your question for @DavidP I would like to share my current thinking about this. To be able to sing and keep the beat while strumming strumming patterns with a complexity above one or four strums per bar, is that the strumming needs to be automated, completely automated, absolutely automated, no need to think at all. Justin says that but just now that I have been practicing Yellow Submarine with all the strumming patterns the songbook I have suggests and trying to keep the beat following a backing track I created with GarageBand, Ive realized what automated means. Except the chord fingering everything has been like I being close to Level 0 of skill. Now after several weeks practicing it is starting to get automated (most of the time). What I have listened from classical guitarists (pros) in YT is that they do not expect to be able play a new piece right away but first study the piece (score reading) and later start to practice sections of the piece. Sorry for the length of my reply and looking forward to read David thoughts about this whenever he can.

My very brief take on your strumming question Jeff.
You think about the lyrics, you think about the chords. Both these elements help each other. As you reach each part of the lyric it reminds you a chord change is coming up. As you change chord it reminds you the next verse, chorus or bridge etc. is coming up.
As for the strum pattern, that has to be completely automatic. It has to be happening without you thinking about it. Whether the chords change mid bar or at the start of the bar or whatever, the strum pattern continues uninterrupted.
There will be exceptions of course but broadly speaking that is the case.

I took a few minutes to read your learning log. Now I see you have a very high level of experience; a lot more than me. It was a great story overall especially the origin of the sairfingers moniker. I always loved Dutch people. When I lived in Germany in the late 1990s I spent a lot of time in Holland. They would get mad if I threw in a German word if I didn’t know the word in Dutch so we would switch to English in the end lol. I didn’t start playing guitar until years later in the USA. So you have a lifetime of playing compared to me

Thanks for the tips. I am one of those annoying people who asks a lot of questions to the experts. I really want to improve. I’ve been trying to get the strumming automatic with a more than basic pattern. Somehow I will get there. It can’t be impossible to play at a level worthy of an audience if millions have done it before right? Take care

This was not long winded at all. I appreciate the time you took to give me some ideas to improve. I like the backing track idea and what you said about breaking the music into sections. Justin has a video that said something similar. There is not a strumming pattern for the song, just for the section and it usually changes. I am ready to move up from boring basic strums to something worth listening to. Thanks a lot for the tips.

The tempo is supposed to be different in the chorus as compared to the verse. I probably didn’t get it right though.

I have never heard the original, so have no idea how well you managed the tempo change. My comment was just an observation that I thought the tempo did change at a point.

I played it again for his father yesterday and he really enjoyed it as well.

That’s great. I think there may be a temptation when we take onboard the ‘Learn songs. Learn songs. Learn Songs’ mantra to end up driven more by quantity than quality. It seems like you are enjoying this song. Rather than picking up another new song that is a favourite from the ‘I want to play’ list of songs, why not double down and go all in for a while on this song. No idea what a while is, that’s a matter of choice. Just maybe keep working it in ways you that are different to your norm and see what happens? Of course, I have no idea of your norm is and have only a glimpse of how you go about things through the recordings you’ve shared.

Do you have any tips for improving strumming patterns while singing and playing?

I’m happy to share my thoughts and experiences, noting of course that these are personal from somebody who is far from advanced.

Justin and others mention the playing being on autopilot, some amplify this and say fully on autopilot. I wonder how we judge this? The only approach I know is to be able to play and be actively engaged in something else. I have tried practicing picking patterns while watching TV. I think being able to watch TV and strum the song would be a good assessment. But maybe that would still not be ‘fully automated’ since watching TV is a relatively passive activity. Step up and hold a conversation with another person while playing the song, start to finish.

I am pretty sure Justin could do this. As a student I recall a guy playing in a restaurant being able to have a conversation with someone while playing the solo for Parisienne Walkways and not miss a beat.

Now, I wonder how many folk here could play a song start to finish while having a conversation. I know I couldn’t do that. I may be surprised but my guess would be that not too many would be able to do that.

So I think this is a concept, my takeaway is that the more familiar you are with the song and playing it, the better.

Justin offers a sequence of steps to work from playing to playing and singing. Again without going into I have not followed the steps rigorously. I think if I did that I may still not have started to play and sing. So again, take the approach more conceptually.

I guess none of this may be really helping.

When I began my singing was quite stilted, mechanical and I found the strumming and singing would quickly align to a common rhythm/cadence. 5 years later I am much more able to play and sing independently. But it is still pretty much limited to 1/8 note patterns and I cannot play any song. Some songs just seem beyond me, while others seem to click.

What has made the difference. I think slow and steady improvement on my playing. I don’t consider myself to be a fast learner, maybe that is talent, certainly influenced by the hours dedicated to playing (results are related to quality and quantity of practice).

The other major factor was dedicating some structured learning and practice to improve my singing ability. My choice was Chris Liepe’s Discover Your Voice course. Improving my ability to sing led to an improvement in my ability to play and sing.

I watch close to all the AVOYP posts. It seems to me, though looking in from the outside can be misleading, that there are many people who seem to get the hang of playing with a steady rhythm and singing more easily than others. I feel it is a challenge for me but maybe one just doesn’t see the investment in practice made by those who appear to be nailing it ‘quickly’.

Irrespective, we are all unique and learn at our own pace. I’d say keep doing what you are doing. I think fair to say we have all seen improvements in your playing and performing. For playing and singing I’d suggest pick songs that are well within your play-grade. I think it will serve you to reduce challenges as much as possible. Pick songs that you know how the vocal goes, know the timing and melody. These may not be on your wishlist to play but will help develop the abilities. Perhaps consider developing your singing ability, depending on desire and time. Just like guitar playing one can learn to sing.

My 2cs worth, from a novice learner rather than an advanced musician with years of knowledge and experience under the belt, so take it from whence it comes.

Thanks very much for the thoughts and level of detail in your response. I think I’ve probably dabbled in at least 30-40 songs the past couple years. Maybe I need to spend time on sharpening up one before adding to my portfolio. I’ve played a couple of soy from Def Leppard, but maybe those will result in frustration and lack of progress rather than confidence building. There are many far easier songs to try. Perhaps I should focus more on the fundamentals and rhythm while multitasking. Thanks again for the response and have a great day.