@SDKissFan recently asked what people were working on and I cheekily posted a rough sketch of a song I had never heard of before but was going to cover.
Well, a couple of days later, here’s the ‘finished’ piece.
Progress is funny- I don’t recognize much of a difference in my playing/singing/performance abilities, but I have become much quicker at being able to get songs in a ‘learnable format’ as well as being able to sing over the playing simultaneously. Not to mention converting files, uploading them to Reaper, editing and even dabble in panning and a bit of reverb here and there.
One of these days I will explore equalisers.
Once again, I twisted my good friend Chris’ arm to provide a solo as well as some arpeggio accompaniment.
Otherwise, it’s just me, my Hagström and my trusty Trio+.
(I took the liberty of adding in @DavidP ‘handle the truth’ remark at the very end) 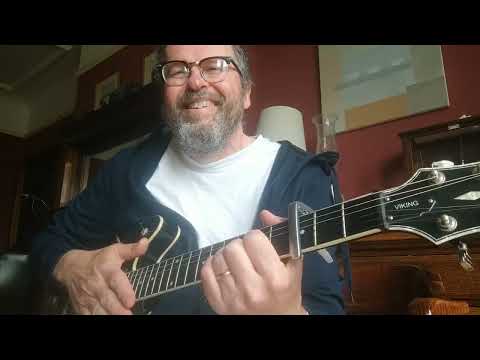 Love it Brian.
I was hoping for a little more spittle shooting from your mouth as you screamed the invectives.
We all hanker for the time before post-truth swamped us don’t we. 21st century disease.
I am surprised you didn’t know the song. John Lennon getting angrily creative.

One of these days I will explore equalisers

That was a quick turnaround but a much better finished article. Not a song I knew either but I never really follow the FAB4 let alone when they went their separate ways. Good deliverance on vox n gtr both very relaxed, seemingly in your comfort zone. Enjoyed Chris’ contribution and the balance of the overall mix, despite you admitting to not doing a great deal to it. As for the lyrics, where did it all go wrong, tell it like it is please !

I was hoping for a little more spittle shooting from your mouth as you screamed the invectives.

Haha, that’s called ‘performance’
This felt more like an exercise getting it done pronto, a bit like speed-dating

Yup, I’m surprised I didn’t know it either.
Very Lennonesque verbal stream- reminded me a lot of the Walrus song

Yes, the sum of the parts was always more impressive to me than the individuals, although all (except the drummer) went on to have some stellar successes on their own.

Hi Brian,
This one was really fantastic

… the vocals and sound were really a step higher than average,BIS BIS BIS… although it was not completely synchronized here, but that is probably due to my connection

… Now there are a few confess, I didn’t know this song either… thanks for the introduction…
I’ll throw you a bunch of flowers and virtually clap for you a few times…

Edit: I’m going to do something about that reading of mine…I thought Chris should do the solo eventually

although all (except the drummer) went on to have some stellar successes on their own.

Hey, you’re probably too young to remember, but when I was in high school Ringo had a string of very popular songs on the radio. As far as commercial success goes, he had 2 Billboard Hot 100 Number 1’s (same as John), and 7 in the top 10 (more than George). No, he’s not in the same class as those other guys, but he did a lot better than many remember.

(Plus, you gotta love Ringo!)

although it was not completely synchronized

Haha, I was wondering when I’d be called out

Because I had to assemble this in the DAW on my pc, it was audio only. I do have a SoundCloud account, but I keep my stuff on YouTube and much prefer visuals, so did another little mime-along. (It feels quite weird, especially during the solo bit!).
There are two points of weakness with this system, first synchronising the mime, then aligning the audio with the video

Ah, I was hoping you were going to point me in the direction of good stuff I had missed

I’m afraid my youthful looks are deceiving, but still remember when the Beatles split up

Plus, you gotta love Ringo!

Loved it, Brian. Enjoyed all the contributions … you, Chris, and Mr T. I agree with Toby, well mixed.

As for ‘handle the truth’, best to keep the attribution to Col Jessup.

The lyrics were such fun, full marks for being able to deliver those with flow. Triggered an association in my musical memory that led me a quick listen to Billericay Dickie. I’ll see no more before somebody sets a Mod on me. @DavidP much appreciated Mr. P. Glad you enjoyed it

Aaahhh, the ecstasy of self-flagellation!

We all know Gordon’s bit of a grump (@sairfingers), but as Smokie might ask: “Who the

I enjoyed listening to this , puts a smile on the face.

You don’t have to mime for the video .

You can record the video at the same time as you’re recording the music. Just clap before you start playing the music and then you can sync up the audio with the video using free editing software that’s easy to use.

I use software called openshot for my videos ! Sorry if you already realised you could do this

Ok, I did not know this song either so I had to YouTube it. It seems timely. I always enjoy how much fun you have with your videos. They always put a smile on my face.

Beautiful song, thanks Brian for reminding me about it… You sang it and played it on the guitar just great!!

Sung and played with feeling and you really got the lyric across even if it was a mime along. You’ve obviously watched too much 1960/70/80s TOTP!
Don’t go over to the dark side, just play and sing, add some Trio+ but leave it at that. You have the talent to produce great music without the jiggery pokery.

I really enjoyed it however. Well done. The lyrics are as true today as they were then. Gimme some truth. No chance of that from Bo Jo or any of the others for that matter.

I always liked Ringo and you won’t find anyone ever saying he wasn’t a good drummer.

Absolutely. Almost all of my recordings are one take mobile phone recordings of me playing and singing with or without my looper.
Every now and again, esp. if I’m doing a collaboration, I’ll record all the different parts separately and mix them in Reaper. If I recorded vocals and guitar as a video, I wouldn’t be able to separate them to alter the balance, add fx etc. No apologies required, there’s loads of stuff out there that folk presume is obvious and I haven’t a clue about

Making people smile is half the point of life!
The other half is smiling yourself

@sairfingers Would you believe, I didn’t even check what album it was on? I must have subconsciously been aware of it as I used to listen to Imagine as a teenager at a friend’s house. Must be pre-senile dementia

You know I live on the edge of darkness, but I’m too lazy to go too far down the tech path

As I mentioned above , it’s usually only if I’m doing something with Chris or the other usual suspects that I summon the grim Reaper…
Watch your step regarding clowns… There’s many a slip twixt now and Indy-ref2

I always liked Ringo and you won’t find anyone ever saying he wasn’t a good drummer.

Actually, I don’t even know which camp you fall in on this one. He’s Marmite

People tend to think he was great or abysmal (drummers included)

You look and sound as though you’re in sync with yourself, the song, the gear, the tech and that’s something that makes it an easy listen for the audience Brian. Your version jogs along. I wonder how it might sound with some slaps, scratches, percussive strums? Probly not, it would change it.

Enjoyable and entertaining as always Brian, delivered in your own inimitable style. A great, punchy start to my morning. Went down well with my coffee and, dare I say, donuts

so did another little mime-along

How very, Top of the pops you are Brian.

Never heard the song before but that was really good and how very apt in the days of “fake news”, he was obviously ahead of his time.

How are you finding all the tinkering? I’ve not even started down that road as I find it all a little daunting and it doesn’t help that I’m lazy and I know there is going to be some reading to be done.