I’ve recently been working on a couple of blues studies that involve the use of harmonised thirds, sixths, fifths etc.
They seem to come up mainly within triads played on the first 4 strings.

I understand the idea and the theory behind most of it but things get a bit hazy when we get on to the bottom 2 strings.
In particular the inverted triad played on the bottom 3 strings which is taken from the E shape from CAGED.
EG: A triad played on 5th fret E string, 5th fret B string and 6th fret G string.
If i remove the third and simply play strings 1 and 2 i seem to be playing a harmonised 5th?
A (Root) and E (5th)
However i always thought you count from the lowest note up to the highest to get the correct interval?
So E,F,G,A gives a harmonised 4th?

Or because we’re counting from the root do we ignore that and call it an inverted harmonised 5th? 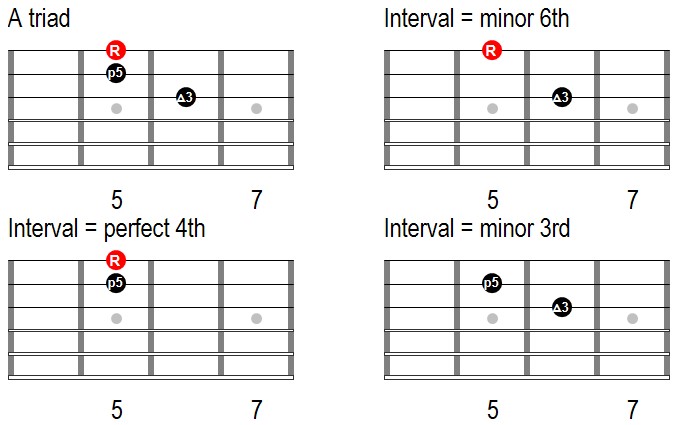 If I remove the third and simply play strings 1 and 2 i seem to be playing a harmonised 5th?
A (Root) and E (5th)

Taking the interval from the lowest note to the highest you have a perfect 4th from the E to the A. Normally just called a 4th. This is a common double-stop.

i always thought you count from the lowest note up to the highest to get the correct interval?

Yes.
That is definitely the convention.It is not a one-and only rule that excludes reading intervals from high to low. But is is the usual method.

The other intervals within your CAGED triad would ordinarily just be called a 6th and a 3rd.

Thank you Richard
Much appreciated

It’s only just occured to me that the 3rd and 6th intervals are minor.
Just counting the notes from C#,D,E
I always thought a third interval but only 3 steps on the fretboard so a minor interval.
That’s where the shapes really help and I guess to look at where you start the count?
C# in the key of A is minor so subsequent intervals will be minor?

I’ll be back.
More to say on this!

Great!
I’m also seeing how the same minor third interval we see in the A chord can be moved around in the context of a D shape 7th Chord.
The open Low E is often played with 3rd fret second string (D) and 4th fret 3rd string (B)
In the blues giving an E7
So In context of that shape 5 and b7 with the open low E thrown in.
Amazing what you see when you start analysing what you’re actually playing