House of the Rising Sun, take 3

Some of you have already seen my first two videos of this song, posted in the Beginner’s Safe Space channel and recorded about 3 weeks apart. Well it’s been (nearly) another 3 weeks, so I thought I should check in again, take another recording and see how it stacks up against the previous efforts.

I have been drilling my changes to/from F pretty heavily in my practice routine, and I think you can see that paying off here, although I don’t always stick the landing on the F, I am definitely able to stay on the chords for longer before moving off.

Anyway enough preamble, on with the video: And for comparison, the previous attempt, 17 days earlier: 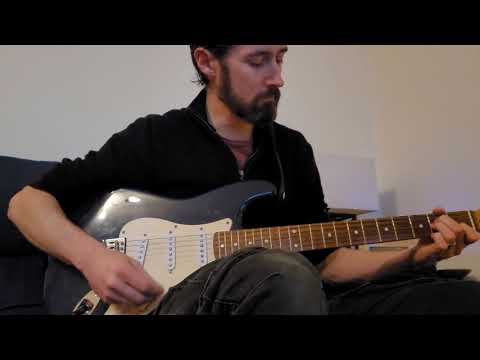 Great effort… Getting the index first or near first is the issue. I had the same problem with the F but with practice it improves, in my case 9 months on it now. You will get there

Well done Brendan. Huge progress from the previous ones.
Your F is really coming on. Just work on getting the barre down at the same time or a fraction sooner than the other fingers as it’s that low E string F note you want to hit first on the first downstroke.

Keep “enriching” this song as you are doing, it will keep you company for many years to come, adding more and more frills to it. It is a great exercise platform ;D

Thanks for the advice, @SandyMusic and @sairfingers. I have to admit, with the F grip I have been planting the 3rd & 4th fingers first and then laying down the 2nd and clamping the barre down last. Not as a deliberate strategy, that’s just what felt easiest for my fingers to do. But what Gordon says, about getting the root note fretted early, makes a lot of sense.

I will start to work on bringing the barre on earlier in the change. I suspect it will take a while to retrain, but I can see the value in it.

I am keen to start using arpeggios on this song, but it feels like I should take my time and really get fluent with these chord changes first.

At the start of my practice routine I have:

And I have a few songs (other than HotRS) in my usual rotation that feature F, like “Hurt”, “Rhiannon”, “Heart Shaped Box”, etc.

I’m open to any tips about how else to optimise my routine to get F working for me.

Broaden up; use that shape to make an A major on the 5 frets or a Gmajor on the 3rd fret.
It’s a little cramped but even the B major on the 7th fret might work.

This is the E shape barre and if you haven’t checked this lesson, now is a good time to do so, even if it is ahead of your current progress during the courses

Learn the E Shape Major and all my secrets to easily play barre chords!

The point of this shape doesn’t evolve around F, The F happens to be one of the hardest barre chords you can do with this shape

Thanks Lieven, I understand the concept of moving the barre around, but haven’t got into practising that yet. And yes that lesson is way ahead of me in the course, I’m still consolidating grade 2.

Why is that? Is it just because the frets are further apart? Or because you need more pressure to fret the strings that close to the nut? Both?

Or because you need more pressure to fret the strings that close to the nut?

Thanks for sharing this comparison of videos with us. You are progressing well. I’m working on the F changes too, not fast enough to use them in a song yet, but your videos motivate me a lot!

your videos motivate me a lot!

I’m absolutely delighted to hear that Andrea. The One Minute Changes and Perfect Fast Changes exercises have been a big help to me. Keep plugging away and I’m sure you will get there.

In retrospect HotRS might not have been the best song to work on for F chord, since it’s a D to F change, which is a big movement. If I could go back in time 5 weeks and give myself some tips, I might suggest to pick a different song for my F practice! Something with C - F, or Am - F perhaps. But, on the other hand, my dad told me that he gave up on guitar when he was a young guy, because he tried and failed to play HotRS right out of the gate, so I kind of wanted to show him that it can be done.

Hi Brendan,
Smart that you also put the first video under it … and indeed, very good to see that you have made enormous progress

… and as Lieven says, you can stretch this song very far. …finally we’re going to play the Tommy Emmanuel version here…Right?..

I was lucky to be able to fret the F right from the beginning. Nevertheless, changing is much harder, like you, I’m placing fingers 3&4 first, then finger 2, then the barre. Otherwise I don’t get the chord. It would be better to barre first, hope to get that soon.

In retrospect HotRS might not have been the best song to work on for F chord, since it’s a D to F change, which is a big movement. If I could go back in time 5 weeks and give myself some tips, I might suggest to pick a different song for my F practice! Something with C - F, or Am - F perhaps

I’m working on Hallelujah, which is an C-Am-F-G and C-F change and Have you ever seen the rain, which is Am-F-C-G. HotRS will be another project for the future.
Just another million OMC and PFC to do…but I’m sure to get there!
Keep on playing and let us hear some more stuff

Sure thing mate. At this rate I’m just going to need about another … checks watch … 100 years of continuous practice.

This is the E shape barre and if you haven’t checked this lesson, now is a good time to do so, even if it is ahead of your current progress during the courses

Just wanted to say thanks again for this tip. I did check out the lesson as you suggested and have added 2 minutes of E shape barre practice to my routine. I’m not yet at the stage where I can play these other positions in a song, but I can see how it will be very practical in future. And focussing on correct form with the E shape in general is helping to improve my F as well.

I am finding that with these barres, my wrist wants to bend more the further down the fretboard I go (away from the guitar body) so F is the worst one from that perspective too. Not sure why, I guess just how the geometry works out, but I can keep my wrist pretty flat if I’m on fret 5 or higher, but on 3 it’s definitely starting to bend and at 1 (F) it is very much bent.

I have been forcing myself to place the barre down first when I do my OMCs with F, which straight away knocked down my speed by more than half (from ~60 to mid-20’s), but it’s slowly building back up.

A glad you you saw that light

I can keep my wrist pretty flat if I’m on fret 5 or higher,

Fret 5 to 7 are perhaps the easiest spot to achieve a good e-shape barre.
angles may differ but try to figure out which angles are considered natural and healthy. It’s hard to tell from here; when starting out, everything may feel artificial and straining. experiment with adjusting whereyou aiming the neck at, what your elbow does etc and check back with pictures if possible when in doubt (or in pain).

Yeah I think it will sort out if I just keep checking in and correcting it. If I make a deliberate effort to keep the guitar sitting flat against my body (i.e., not leaning it over so I can look at the fretboard) and make sure I pull back with the elbow, then the wrist ends up where it ought to be. It feels a little uncomfortable/stretchy but, as you say, that’s to be expected. I just need to put in the time and entrain those movements and positions.

And you may find Brendan that tilting the guitar so the headstock is pointing up at an angle, rather than the neck being parallel to the floor, helps with the hand positioning.