I never did like Oasis, so when my friend Les Glover played this at a gig at our local arts centre last weekend, I grinned and thought to myself: “Rack ‘em up!”

Les is an aging punk who I occasionally bump into with his trusty side-kick Henry Priestman (worth googling). However, he also plays guitar and sings with the old drummer from Slade, Don Powell, and they recorded this song not too long ago.

I had to step out of my comfort zone, as I usually download the chords from Ultimate Guitar, but it hasn’t become famous enough (yet) to have received the ‘treatment’. I did message Les and ask him for the chords, but he hasn’t responded (yet), so I had to take matters into my own hands and rely on my ears, as well as a short video appearance on Vintage Radio (where I used to have a weekly radio show) to help identify some of the chords. Needless to say, I took shortcuts and made ‘simplifications’

I only started with a Trio+ backing track yesterday and had no intention of recording anything till I could at least remember some of the lyrics, but the T-shirt I’m wearing arrived in the post today from my mother-in-law, and I thought a live, aging-rocker-response would be appropriate

This is as low-fi as it gets; I didn’t even record it on my phone but used the webcam on the pc which does not synchronise aud/vid that well.

I haven’t’ decided whether it will receive the turd-polish-treatment at a later date, or just be left as a fun flash in the pan.

Here’s a link to the proper version 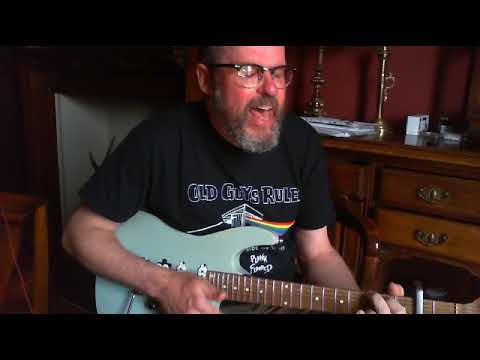 . Needless to say, I took shortcuts and made ‘simplifications’

Indeed,…will it ever be different???

Of course I liked to watch and listen,…but it was good to see that you had a harder time with it than other performances,…and personally I think when you give this song some extra practice ,is really worth going for…Go for it old man

You look healthy sunburnt in your face by the way! how is that possible, do you have sun now and then?

Like it Brian; too true that Old hits rule (especially stubborn ones

)
Loved it, much more than the one in the title

@TheMadman_tobyjenner Cheers mate.
We all know what I should be doing

will it ever be different???

The day will come… but today is not that day!

You look healthy sunburnt in your face by the way!

@DarrellW
Haha, some of us ol’ fogeys are truly stuck in the past…
“Storm’s a-comin’, Ma!”

great stuff I enjoyed it, you told a cool story there and kept me entertained throughout. Low tech was great and I didn’t pick up.much of an issue with the sync, all good to me sir!

As with all your productions Brian, you’ve aced this.

Perhaps the title should be ‘I won’t be singing Wonderwall tonight’. Irrespective of any "No Wonderwall’ signs on the wall, the progression is catchy and I’ll never say no to happy dose of parody.

Enjoyed your rendition as much as the real thing Brian … someday your creativity may fail and we are all disappointed, but it is not this day.

Cool T-shirt and, based on the glimpse offered by your camera angle, a nifty summer shearing for that summer look.

cheap wine when I was young and foolish

But I wasn’t any better then, and I even maintained that until something after my younger years with too cheap wine and sometimes stronger stuff

… hopefully the damage has been limited with us

And for all the good things,… the day after a day has passed, comes one day closer, so no worry be…

Should I be affronted after doing a Wonderwall cover?

That was really good Brian and if you ever did want to cover “the song that shall not be named” you’re not too far off with those chords.

Sure you weren’t kinda playing Wonderwall?

Hi Brian,
I haven’t heard this song before, but I can say for sure that all the chords that you play are at the box office

and in general, it’s a good performance from you, as always.
This could be the highlight of a party with guitars by the campfire

Very entertaining Brian, I really enjoyed that. It doesn’t need polished up, your singing and playing gave it a totally natural vibe. Your usual infectious enthusiasm shone through as always.
Working out the chords for a song can be very satisfying and must help your ear, but I’m like you, I usually look online.

Friend of a friend with the drummer from Slade…… you name dropper you!

I’ve got a similar T-shirt which I might dig out next time!

@batwoman Still waiting for my first sucker punch from the crazy lady down under. Generous as always, Maggie

someday your creativity may fail…

Haha, those are the days I ‘magpie’ other folks’ creativity

But thanks for the listen and encouraging comments. I’ll keep an eye open for your T.

hopefully the damage has been limited with us

Perhaps we are just ‘well-preserved’ now

Should I be affronted after doing a Wonderwall cover?

Sure aren’t you my muse and inspiration?

@jkahn
OK, Mr. J(o)K(er)-
I tried a 4-finger G once at the very beginning and thought: “Why would anyone ever make things more complicated than necessary?” I’m strictly a 3-finger-dude

And British? Did you say British?
Oh, my days… Will someone please alert the mods before I start effin’ an’ blindin’ in guttural Dublinese and exceed my Community points limit?

I guess it is a bit WW-ish though…

@crocodile1 Leo, my friend. Not many have heard this song before

I’m afraid if anyone ever handed me a guitar around a campfire I would be perplexed, as it appears I have only room for one song in my head at any given time-
and that is only for a brief window until I start my next one.

Nice. I hadn’t heard that song before. Great version!

Very entertaining Brian. I’ve not really listened to much parody songs since the days of the amatuer transplants. As usual you brought the song to life with a performance that would capture the audience.

Or maybe a closet Oasis fan

I think you’d be in your element. I’m sure you could knock a few songs out of your repetiore if asked.

OK, Mr. J(o)K(er)-
I tried a 4-finger G once at the very beginning and thought: “Why would anyone ever make things more complicated than necessary?” I’m strictly a 3-finger-dude

And British? Did you say British?
Oh, my days… Will someone please alert the mods before I start effin’ an’ blindin’ in guttural Dublinese and exceed my Community points limit?

I guess it is a bit WW-ish though…

Did I call an Irish guy British? Oh god, that’s just as much of an offense as mistaking a Canadian for an American! You’ll have to excuse my uneducated antipodean ways, it’s hard to tell the difference when singing!

Oh the song was pretty good btw, and tbh, as much as I liked Wonderwall when it came out and know how to play it, I just can’t bring myself to make it campfire worthy because of how much of a cliche it is now, sadly.

You’re quite right- Like many of my countrymen, we made the journey across the Irish Sea and ended up in the nearest big city to ‘home’

). In some ways I have a greater affinity to the people of this country than where I was born. I only lived in Dublin for 15 years, but have been in England for the last 22, with no intention of ever leaving.
Respecting community etiquette, I shall refrain from sharing some strongly-held views on certain Brithsh institutions/events, but I do despair at times

If WW speaks to you, you should share it with others.
Life’s too short to worry what the musical snob-police might think

Edit: the Danish half of me thought it was quite funny

Edit: the Danish half of me thought it was quite funny

It’s only now that I’ve seen your post. Enjoyed it, nice start into the day. I like your authenticity and self confidence. Good, catchy voice on top. Hope to hear and see more of that. I don’t care about WW or not, tecnically perfect or not, that’s how music should be… making the audience happy