Great to see you on the new site József and I think you’ve given @DavidP a run for his money in the longest road case/learning log stakes!

So the bathroom renovation has not gone down exactly as planned, i.e. it’s still not ready, but I hope to finish the remaining work this year. Which means that sometime this week I can finally return to my beloved guitars and dust them off, literally, for a start. Then I’ll have to spend a couple of days or 1 or 2 weeks by revisiting the things I’ve been working on.

As I still can’t really use my instruments, I think it’s a good opportunity to make some guitar-related plans for next year. In no particular order of importance: 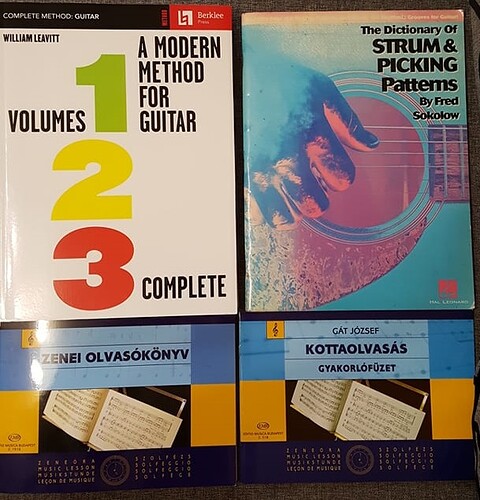 The two books on the top are intended for guitar players. They look fascinating and full of valuable knowledge, even though in the second one I’ll be likely to prefer picking to strumming. The two in the bottom are intended for music schools and solfege classes. Although I neither sing nor play the piano, I think it would be cool to be able to decipher sheet music and play these things on the guitar “just like that”.

Great to see you on the new site József and I think you’ve given @DavidP a run for his money in the longest road case/learning log stakes!

I find that writing these things down helps me make my purposes clearer to myself and give my learning some more structure.

I think you should put this one top of your list. Otherwise what’s the point of all the rest.

Yes, that’s right. Probably the wording wasn’t the best. What I meant was that I don’t have one or two very specific songs at this time that I want to learn.

Maybe it’s a bad habit, but I tend to be more interested in “bits and pieces” of songs. For example, I got back to practicing the arpeggiated guitar part from Maggot Brain that I started last year. It’s getting better, but if I played it to someone they wouldn’t necessarily recognize the song as Maggot Brain.

I got down the chords of Knockin’ on Heaven’s Door reasonably well (the strumming pattern needs some more work), but as I don’t sing, it is a sort of torso, although an entertaining one.

I really like jazz (fusion, mainly) but it’s not exactly about repeating the same chord sequence again and again. Like, Bitches Brew is one of my favourite records, but when I think about even attempting to try to play along with it, well… I still need to cover a lot of theory for that.

I don’t know if my answer makes any sense, but yes, there are plenty of songs I like, but I generally prefer tinkering on various parts, a melody or a riff, and piece them together if I can.

Back in the days of the old forum, @Richard_close2u recommended this challenge: Guitar Challenge 0003 - Is There Anybody Out There? - Pink Floyd

In the new forum: Guitar Challenges (Songs) - Is There Anybody Out There? (Pink Floyd) - #7 by Jozsef

Hey jozsef, I also studiedEnglish lit for an M.A. at Univ of New Mexico and then stayed in higher Ed for 34 years. Pursued a PhD but that wasn’t in the cards. Pursued a linguistics degree. That too wasn’t finished. But I’m better off for the knowledge as a teacher and a person.

I’m also way into film and film making. I grw up in the SF valley just over the hill from Hollywood. It’s in my blood!

Really enjoying the details of your musical journey.
Cheers,
Vinnoe

When I started out learning to play the guitar, I kept a kind of journal of the things I practiced. I did it for about 2 months and then gave up, the physical act of writing is just a bit too much sometimes.

However, today’s practice session is probably worth remembering. It was about 3-4 hours long, and it may better be called a free-ish practice.

I started out with the guitar challenge mentioned above. I gradually get better at it and I can play the song from memory at a relatively consistent tempo. However, it sounds nothing like the original recording, probably the tab is a simplified version, not that it’s very easy like this, either

The recording sounds to me as if certain parts were doubled on another guitar, as if the notes played on the 4th string had more emphasis on them. That, or I’m not skillful enough to play the piece. Anyway, I don’t mind if my version won’t be a carbon copy of the original as long as it will be listenable and easy on the ears.

After this “acoustic set” I moved on to the electric guitar and revisited the arpeggiated chord progression from Maggot Brain. If I compared these two songs in a tab, I’d say this one was the easier one. Well, as it turned out, this one is a tad more difficult, but I’m not sure why. Maybe because I play it with a pick? Who knows. After a few attempts I manage to play it through 4 or 5 times but then things start to fall apart. But I won’t give up.

Then I remembered that a long time ago one of the songs (or riffs) I worked on was Born Under a Bad Sign. It was so difficult when I was new to playing the guitar, but after a few months it became much easier. So I thought to myself, why not try to play along with the Cream version? Just like that, as if Clapton was my weekend jam buddy. I tried this about a year and a half ago, and then I found it super fast. However, now it was a comfortable tempo, and I managed to figure out a few smaller parts as well by ear.

Following the “blues trail”, I tried Sitting on Top of the World from the same album, just for fun. This time I tried to play along with the bass which is never easy in the case of Jack Bruce. At the first 2 or 3 attempts I fumbled around quite a bit but then I managed to figure out the main theme of the song and a few bass parts as well. It was real fun!

Then the Cream bug bit me and I played along with a few live recordings, Politician being one of my other very early attempts at figuring out a riff. The other one was Spoonful where the band stretched out quite a bit. Well, I don’t say I would be the best choice to sit in with musicians of this level, but I think some of the things I played fit in the overall sound. I enjoyed it, that’s for sure.

Interspersed with all this, I tinkered with a few chord changes I “found” recently, just with some random strumming patterns as I felt it. The changes are Amaj7 to C, Gmaj7 to Cmaj7, Dmaj7 to Bm, and there was an F#7 thrown in, too. It might be a maj7 overload, but these chords just sound so good, especially with a bit of reverb added. I’m not sure it’s a very song-like set of chords, but they evoke some emotions in me (at least), and I think that’s already some progress.

P.S. Forgot to mention Equinox by John Coltrane. Hubris definitely kicked in by that time, but I think I found it to be in the key of C# minor, though I may be wrong… I could play along to about 3 notes, so I would be out of my depth if I had to play it live. But during the piano solo I managed to play a few small bits that didn’t sound bad. I will revisit this song sometime later when I know more theory for jazz.

Back at uni, one of my professors tried to gently steer me towards a PhD, but I had to find a job after my MA, and I kind of lost interest in studying literature for a degree. I also became kind of selfish in the sense that I can research things that I’m interested in, but I don’t have any interest in doing it for a piece of paper. However, I liked studying English and I wouldn’t change anything about the path I took.

Hi Jozsef, your learning log is very interesting. I am also very interested in how you play along with the songs. Would be great if you can post a video or audio.

Yes, I’ll try to post one of them in the near future. I only have my phone or tablet to record myself with, so I hope the audio/video will not be too bad.

looks like truly a fruitful day, lots of interesting and challenging songs - glad you took most out of it

However, today’s practice session is probably worth remembering. It was about 3-4 hours long,

It sounds as though you’ve been led by curiosity, discovery and inspiration to explore a variety of musical paths Jozsef. What a rich way of spending 3 - 4 hours.

That’s great, Jozsef! There’s nothing better than a day when it just all seems to fall into place! When you get into the groove like that you just don’t want to put the guitar down.

I took a few short breaks, though, so it wasn’t a traumatic experience.

Well that sounds like a very industrious session. Do you record yourself ? Would love to hear some of these practice pieces, Please share when you can

At the moment I can record only sound with my phone or tablet (I tried to record a video of myself, but then the sound quality was abysmal). The Focusrite Scarlett 2i2 Studio thread gave me an idea to invest in some dedicated recording equipment (we’ll see about the video sometime).

I hope to post my version of Is There Anybody Out There? in the guitar challenge, I still need to work on a few details.

NGD on the horizon? Well, it looks like that. There’s an instrument store in another city in Hungary where they are supposed to have the Epiphone Casino in stock. I sent them an email just in case. What’s more, they have an Epiphone hard case suitable for that model, too. And I could get them virtually for free as the store accepts payment by a type of benefit card to which my current and past employers loaded some

By default, I could use the card for catering/ordering food or paying for accommodation, but during the pandemic I could not use it very often, and the tax brackets were also eased a bit, so now there are some extra funds sitting there.

In any case (no pun intended), even if they don’t have the guitar in stock and can’t order it either, I could still buy the case and the Focusrite as well along with some other items in preparation… And if they do, I would only have to pay out of my own pocket for the train tickets to get there and back (I wouldn’t like to buy an instrument unseen/untouched).

Actually, I’m feeling somewhat greedy now, and it’s a feeling I don’t like very much, so I’ll try to tone down the anticipation a bit. But things are looking promising from a NGD aspect.

Thinking ahead a bit, Jozsef, I assume given consideration of a 2i2 that you have a PC?

If so and should you pickup the 2i2, then you can make videos relatively simply using a free software OBS . You can feed audio in direct from the 2i2, no need to make use of a DAW. And with this you can make use of your phone as the camera.

Indeed I’m using a PC (laptop) so thanks a lot for this idea. I’ll check it out