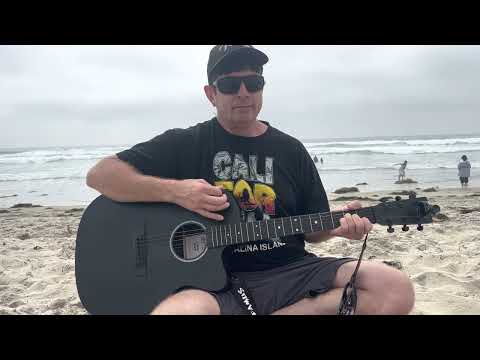 After reviewing Justin’s lesson about having a handful of songs ready to play without a music sheet to be ready at a party, I soon realized I have none I can play from memory. So I left work early, went to the beach and used his knocking on heaven’s door example. The lesson here is you have to remember the lyrics, chord progressions, play in time, have a steady rhythm, and do all with distractions. You’ve got the sound of the ocean, kids yelling, people walking by watching, your wife smiling while filming, people sunbathing watching me that I’m not supposed to notice, etc. so the takeaway is you lose some quality if you don’t play among distractions. This is Mission Beach, about 15 minutes drive from the house. Let me know what you think. Thanks for listening.

That’s a great exercise, Jeff. The strumming came across as a little stiff, choppy to me, not as relaxed as the previous video, but fairly steady. Still some work to be done to memorise lyrics. As you say, ups the ante when you have to put it all together from memory. Well on your way, keep working the song.

Thanks David. IU appreciate the honest feedback. I knew this was not my best showing, but if I don’t work on it I will never be ready to perform. I just realized I can click a name and see where a person is from. South Africa, huh that is cool. My friend here is San Diego is from there and he and his son speak Afrikaans to each other, probably the only 2 in California. I understand some of it because I speak German and some Dutch and it sounds similar to me.

It was a good exercise and quite sure you would not have cleared the beach, Jeff

As you say, keep stretching and playing. It takes me weeks and weeks to get a song memorised and up to what I consider to be an acceptable level of play and sing to perform it live.

I’m quite sure there are more South Africans in California … many many folk have left the country in the near 50 years that I’ve been aware of it (and that’s enough about that). Afrikaans is derivative of Dutch primarily, or maybe Flemish, I think but must have other European language influences given it was the language of settlers from back in the 1600s. I can pick up a little when reading Dutch and German eg Lieven’s advert for his guitar pedals (is he writing Dutch or Flemish, not sure?)

Well done Jeff. Sitting on the beach strumming guitar. Nirvana!
Your strumming wasn’t as relaxed as I’ve seen in some of your other AVoYPs. You’re essentially busking so we’ll excuse you.

Well now, someone is just showing off

Nicely played but like others have said, try a loosen up on that strumming.

Hi Jeff, I suspect you’re someone very comfortable in your own skin. As such you knocked that exercise out of the park! So cool.

Well done Jeff. Keep up the good work. Those kids yelling, the people walking by and the people sunbathing will soon be sitting around you listening contently to your playing and joining in the choruses with you.

Nice take Jeff! Though i could hardly hear you and your guitar because of the ocean lol. But from what i heard it was decent, just keep at it and you will get there! Rock on!

Thanks for the feedback. Yeah I could have done better. That was part of the exercise as a learning experience. Overall I need to be louder and play amongst distractions. Thanks for listening.

Thanks very much. I’m used to speaking in front of large groups. In my career I manage a patient assistance program for patients with serious diseases like cancer and have a staff of about 120 or so. So I have to give speeches in front of large groups and to fancy drug companies VPs. It took a while to learn skill of public speaking. Now to learn public performance and to do it well. Thanks for listening.

Your first proper public performance and what a great place to do it? Good job. I agree with DavidP about the strumming, but its all a work in progress, especially doing it all from memory and with all the distractions. You are well on your way.

That’s a great effort Jeff, I don’t think I would have dared to play in such a public place while singing at that stage (still struggle with it now) so props for that first.
As it was said before, the strumming is a little stiff, and the singing could be louder, but those are things that you’ll get in time.
Keep rocking and keep sharing, it’s always exciting to see the progress of the people in the community.
Cheers!