It’s just the major scale but starting on a different note.

This leads to the oft used sequencing below.

For anybody who has had a most cursory of introductions to modes that may be a familiar listing.

Let us start simple and use the C Major scale - no sharps or flats to confuse things.

Here is a depiction of the C Major scale with the respective whole steps (Tone = T) or half (Semitone = S) steps as you move from one to the next.

What we will now see is basic a simple and repeating process.

Step 1: Start with the C major scale written out to its first octave.

Step 2. Remove the first note, C. The new beginning note is D. It becomes the new root note of a 2nd scale so D is added at the end to complete the octave.

Step 3. Remove the first note, D. E is the new root note so place an E at the end.

Step 4 and beyond. Continue this process until seven scales have been written out.

Maybe you will prefer, and can relate more to, the logic and sequential nature of this scale building process with an overlapping diagram. Here, the notes can more clearly be seen as remaining in their original positions, with their respective intervals maintained and with one extra note (the octave of the new root) added each time. 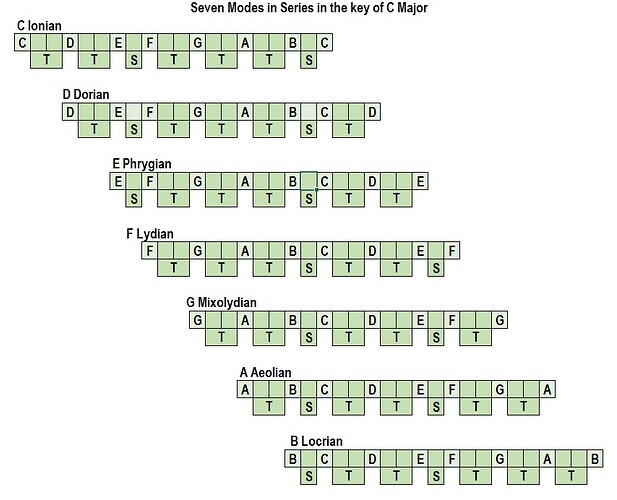 As the diagram above shows, this process starts with the major scale then leads through seven scales in total. Each has a unique pattern of steps and scale degrees. Each is a new mode. The first – the major scale itself, is the Ionian mode. The others follow in turn.

There we have it.

It’s just the major scale but starting on a different note.

Personally, I do not particularly warm to or benefit from this description and the type of demonstration it leads to. I will elaborate.

Note: there is another reason Do-Re-Mi will not necessarily sound modal. It is to do with the underlying harmonic movement of the chords and the fact the main melody does not accentuate the ‘colour notes’ of the modes. It never strays from being a major scale melody. But this necessary technical footnote obscures my main point.

I have created two audio samples to listen to at this point - so we can hear the modes in series and perhaps to perhaps illustrate my point above.

In the first we can hear all seven modal scales that can be built from the C major scale in ascending order. Starting on note 1, then on note 2, then on note 3 etc.

All seven modes of C Major in succession

You are listening to

In the second we hear a repeat of the first but with the addition of the diatonic chords played before the scales.

All seven modes of C Major in succession with chords

You are listening to

Do you hear C Major chord as a tonic chord for the C Ionian mode?

Do you hear D minor chord as a tonic chord for the D Dorian mode?

Do you hear E minor chord as a tonic chord for the E Phrygian mode?

Do you hear F Major chord as a tonic chord for the F Lydian mode?

Do you hear G Major chord as a tonic chord for the G Mixolydian mode?

Do you hear A minor chord as a tonic chord for the A Aeolian mode?

Do you hear B diminished chord as a tonic chord for the B Locrian mode?

I hear the successive chords of a harmonised major scale. I hear an etude, a scale study piece made up of chords and ascending patterns of notes from a major scale.

I do not hear any different flavours, any exotic and bewildering modal qualities.

This is likely subjective, but, for me, hearing the modes like this does not help me at all. I wholly understand and admire the logical beauty of their creation. The overlapping, intertwining, one-preceding-another nature of the notes. My mathematical, logical brain can fully grasp that as an abstract concept.

But I am not hearing the musical magic.
I am simply not feeling or grasping the passion and zest that modes are supposed to bring me to enrich my life.

The order of the modes

The modes are given ordinal names to match their relative position from the parent major scale, to match the scale degree from which they take their start point and root note.
Perhaps there is some special something which can be discovered here that reveals the reasons why so many lessons on modes introduce them in series.
Perhaps.

Once again, for simplicity, using the C major scale.

Against the ordinal for each mode we will see listed any scale degrees they contain that are not natural notes (i.e. flats or sharps).

Apart from the counting up from the 1st to the 2nd to the 3rd and on, where is the logic in any of that?
Is there any sort of pattern or logic to the number and placement of sharps and flats from the 1st mode through to the 7th mode?
None that is readily apparent at first glance.
Those (mainly) flats and the one sharp seem to be a random and haphazard mix.

There is something familiar and maybe useful. Looking at the 3rd scale degrees of each, the type of mode runs:
Major, minor, minor, Major, Major, minor and weird!
To determine this we simply look to see whether a mode has a b3 or note. If it does not, it must have a natural (major) 3 so is a major type of mode. If it does it must be a minor type of mode. The last, Locrian, has a b3 but much else going on that makes it a little unique and, dare I say, awkward.

Aha! The diatonic chords from a major scale follow the order:
Major, minor, minor, Major, Major, minor, diminished. That certainly seems to match what we have here in the type of modes. Perhaps this is the power, the goodness, the usefulness that people find when presenting and using modes in series. Many people do seem to use the M, m, m, M, M, m, d pattern as a peg to hang the modal types on to and as an aide-mémoire. If it works then all good.

But, for the aural / musical reasons already stated – the missing modal magic - and due to misgivings over those unanswered questions, I am going to move past this view of modes for now. I am going to look at modes from another view, which is modes in parallel. Doing so in hopes that it rounds out the understanding, gives deeper insight and addresses some further uncertainties.

The last, Locrian, has a b3 but much else going on that makes it a little unique and, dare I say, awkward.

So early on and already dissing Locrian

Its not weird or awkward
Its just special, so very special !

So good to see this again Richard. 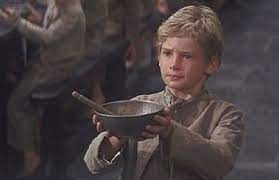 I’ve made up a rock based little mnemonic to help nail remembering which is which of the common minor modes.