We began our study with a general Introduction to Modes and continued by looking at Modes in Series.

The adventure continues now with a further perspective on modes.

Parallel modes share the same root note but contain different intervals, hence different sets of notes.
This contrasts with modes in series where all modes have the the exact same seven notes in the exact same sequence but starting from a different note of the sequence.

As we explore and discover, each of the seven modes will be shown with root note C. They will all be shown as a collection of seven notes taken as a cluster from the circle of fifths. 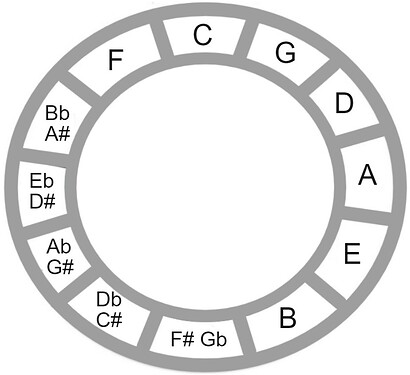 This is a basic representation of the circle of fifths. Hopefully you have at least seen this and can follow the logic of note placement by way of knowing a little major scale theory. Each of the twelve notes appears once. The notes do not appear alphabetically. Each immediately clockwise note is the fifth note of its neighbour’s major scale.

G is the 5th note and is immediately clockwise of C on the circle.

D is the 5th note and is immediately clockwise of G on the circle.

A is the 5th note and is immediately clockwise of D on the circle.

This pattern applies no matter what the start note.

The Circle of Fifths in colour

The circle represents twelve notes, has twelve sectors and can be viewed as a clockface. I am going to steer in a different direction and overlay a 12-sector colour wheel. The circle of fifths now looks like this: 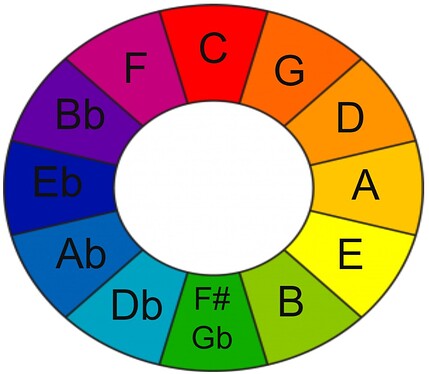 Note that we have moved to single names for the sharps / flats, apart from F# / Gb in the 6 o’ clock position. The reason for that choice and simplification in appearance will hopefully become apparent as we continue.

We are going to discover seven modes using the Circle of Fifths, each having C as its root note. Each mode will comprise of seven adjacent notes together in one unbroken arc around the circle.
To begin, we will find the seven-note cluster that contains only natural notes, no sharps or flats. Hopefully you can identify this cluster, spanning from F at one extreme to B at the other (think 11 o’ clock to 5 o’ clock). 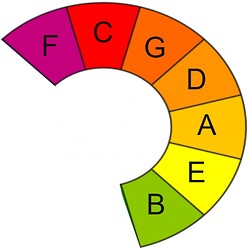 We are now looking at seven notes separated from the full circle of fifths, inside of an arc, a ‘modal frame’ if you will.

When those notes are placed in alphabetical order (as scale convention requires) with C as the root note, we have:

This is the Ionian mode. It contains a major 3rd so must be a major type of mode. In fact, so commonly used is it, so ubiquitous, so crucial in the western system of musical theory and practice, it is most often called THE major scale.

The Ionian mode = the major scale. They are one and the same.

This particular example of a major scale - the C major scale - is renowned and often used for musical explanation as it has no sharps or flats. On a keyboard it is just the white notes.

The Major scale / Ionian mode is generally described as having a bright or happy character. What if asked to respond to the colours within that arc – how would you describe this cluster? Warm? Bright?

The next, and all subsequent modes, are found by rotating the modal frame surrounding the seven-note clusters one place at a time.

From the Ionian mode, let us analyse what happens when the modal frame is nudged to the one place clockwise. Think in terms of notes and colours.

The note F is replaced with the F#. Starting from the ‘bright’ Ionian mode then introducing just this one sharpened note, the sound will be altered.

We now have this cluster of notes. 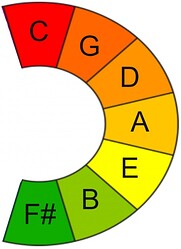 Notice that F has been replaced with F#. We must choose to name that note F# and not Gb in this instance. Scale convention insists we cannot have both a G and a Gb in the same scale, nor can we omit any of the seven letters.

When those notes are placed in alphabetical order with C as the root note, we have:

This is the C Lydian mode. It contains a major 3rd so is also a major type of mode. Notably, it has a #4 scale degree. It is often described as sounding even more bright, lively or fresh in character compared to the already bright Ionian mode.

We have found our first two modes. To continue with our mission of finding seven modes in total we must use a method of finding additional seven-note clusters, all containing the designated root note C.
Consider further rotations of the modal frame. Should it be rotated clockwise, even just one place, then the note C would be lost from the extreme left, left behind and not contained within the frame. We would have captured a mode, for sure. But, we cannot make that clockwise rotation here, we cannot do that as part of this particular journey of discovery. The reason is simple and already stated. We are going to look only at parallel modes whose root note is C. This must, by definition, constrain us to viewing only note clusters with C in their groupings. We must rotate in the opposite direction. We therefore reset back to the Ionian mode (our zero, or default setting) and rotate the frame one place anticlockwise from there. 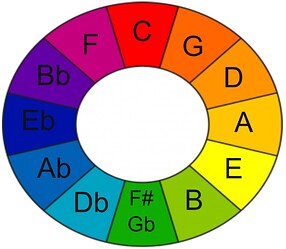 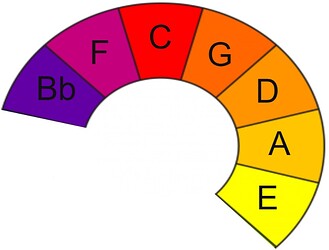 B has been replaced by Bb due to the rotation.

In the C major scale, B is the 7th note. Here we have a new scale, similar to the C major scale but with a flat 7. This is C Mixolydian. It, like Lydian and Ionian, is a ‘major type’ of mode as it maintains a major 3rd. Its characteristic sound is formed by the b7. It is sometimes described as a bluesy sounding major scale.

Let us look again at the full coloured circle of fifths and anticipate the next move, the next anticlockwise rotation.

How will it affect the notes?

How will it affect the colours?

What interval will change?

What name will the new mode have?

What will make it different to those we have met so far? 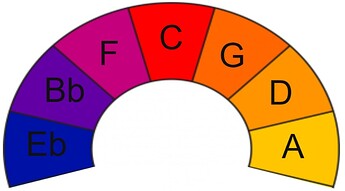 The bright yellow E has been replaced by Eb. In the C Major scale, E is the 3rd note. Therefore we now have a new scale, having some overlaps with the previous modes, but, crucially, something new and different happens now.
To understand, let us first write the notes alphabetically.
The new scale is:

This scale is C Dorian. For the first time we no longer have a major 3rd. The 3rd scale degree here is a b3. This means Dorian is the first ‘minor type’ of mode we have encountered so far.

Note the colour of that Eb note, that minor 3rd. Blue.
Is that why they call it the blues?
Is that why sad songs say so much?
That’s enough Elton John references for now!

We keep on pushing. Another anticlockwise rotation leads to: 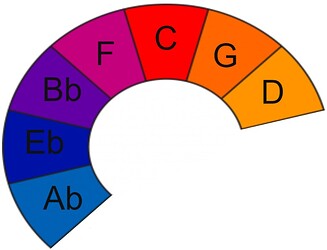 A has been replaced by Ab

This scale is C Aeolian. As with Dorian, this is a ‘minor type’ of mode due to the minor 3rd of Eb. In fact, when it comes to making music with a ‘minor type’, this, like its counterpart in major types (the Ionian) is so widely used that it is most frequently called THE minor scale. Or the natural minor scale. It is also frequently referred to as the relative minor of a major scale.

Another anticlockwise rotation leads to: 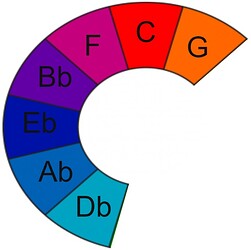 D has been replaced by Db.

This scale is C Phrygian. As with the two previous modes, this is a ‘minor type’ of mode due to it containing a minor 3rd.

Four of the original seven notes of the C Ionian (our zero, our default cluster) have now been replaced. The warm, bright colours from the right side of the colour wheel have been steadily replaced by cool, dark blue-tinged colours. Phrygian is given descriptions such as ‘dark’ when discussing its sound.

We have seen six of the seven modes.
One final rotation of the modal frame takes us to our last.

It includes the need to rename F# as its enharmonic equivalent Gb.
Perhaps you can figure out why this must be done?

Answers on a postcard please … 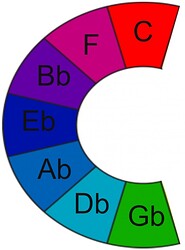 G has been replaced by Gb.

This is the Locrian mode. It is virtually never used in musical composition so is an oddity that can be safely viewed then set aside and left to catch the dust. Poor thing.

I must state that I like the beauty and simplicity of this method of discovering the modes in parallel. It also connects, complements and enhances the diagram of overlapping scales shown previously for modes in series.

And it hopefully helps you see the how, the why and the wherefore in relation to questions asked in the Modes in Series topic. Questions such as: is there any sort of pattern or logic to the number and placement of sharps and flats from the 1st mode through to the 7th mode?

I hope that an answer to that has been revealed, bit by bit.

There is more to come on the sounds of the modes, their sonic differences, their unique qualities etc.

There is also more to come about the colours.

For now, I will allow you to read, digest, query, explore and query again.

Ask your questions, make your comments.

Thanks for this Richard. These Topics are a Priceless asset to the Community, as valuable as Justin’s lessons.

The day will dawn when I choose to immerse myself in modes. Before that day will be the day when I look at your exposition on blending major and minor pentatonics. For now, music making with minor pentatonic.

Thank you @CT and @DavidP … just like a young child with a story book - if you can’t yet read the words you can simply enjoy the illustrations!

if you can’t yet read the words you can simply enjoy the illustrations!

And such cool illustrations

I can read the words and make sense. But mindful of and live the Justin mantra about when to learn a scale. Now when my attempts at improv over the Layla BT have become far more musical, and I can venture down the neck to commence the improv in position 3, as low as I can go, then maybe I’ll think about that major pentatonic. Or maybe Major Scale Maestro. Eventually the road will hopefully take me back to playing leads that sound like the blues. The road is long …