I overindulged on waffle last night at the OM

so no more words from me!
(Well a couple on YT)
‘Studio’ and ‘dress rehearsal’ versions: 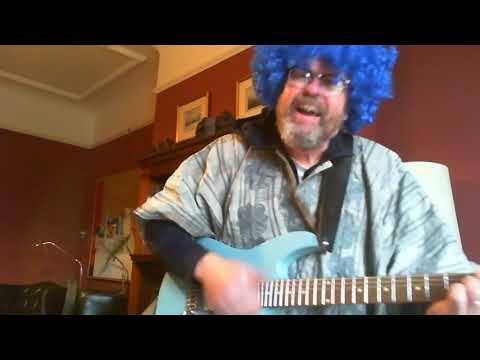 You’re a good sport, Brian … the OMs and Community in general without all the banter given and received around you just wouldn’t be the same.

I took a look at the Studio version. Go on send it to Neil …

It was fabulous yesterday…happy to revisit it again

Stole the show as always, really made smile on my face multiple times during the evening! Blue hair is like a little variation to McDonald’s clown hairstyle, perhaps this one is McD in Everton’s area?

Comically whacky, Brian, which you do so well! I’m just sorry I missed the live performance.

I’ve got no idea where you get them from!
That was a treat last night after the build up to it, glad you put it on here for further listening

The studio version is absolutely ace! You’ll soon have enough material for an album!
You’ve soon got into playing with the HB, you look comfortable with it! Like the bit of dirt and wiggle stick work, looks like your having fun!

One of the many things I love about you Brian, is your willingness to put yourself out there. A fine example indeed.

…i expected some distraction with the other act

…but besides being very nice

(entertaining) to watch, the performance was also really worthy of a big stage

(your voice also fits really well with this (deep bow) )…really great, can’t wait to show this to my girl tonight…
I’ll make sure I’m at least in the audience next time…

Brian, your performances are unique and the OM and the community wouldn’t be the same without you.

Your rendition of crazy hair was brilliant.

I’m looking forward to OM7 to see what you bring. Love the new guitar look and tone as well.

What can I say Brian? Soooo entertaining. Do you go onto Google with a search term like ‘songs no one on the Community will ever have heard of’?
Terrific stuff as always.

Really enjoyed the studio version! loved the additional effects etc. really really nice production. Did you put this all together yourself because it sounds pretty professional to me. I reckon you’ll pick up quite a few views of this globally!

This sounds like this would be a pink floyd song lol. Nice one! Really liked the production to it was pretty cool!

hi Brian!
I read with interest about this short novel and what happened to the Bonnie’s friend’s crazy mane there

Your studio version is, of course, something outstanding. Bravo!

@DavidP Muchas gracias, senor,
It’s a good job I don’t touch a drop of the Whisky in the jar, eh? Who knows what could happen?

Go on send it to Neil

Hehe, I don’t twitter but have an account so did tag him in a tweet. He has only a couple of million followers, but should recognise class when he sees it

@adi_mrok actually, stealing happens to be my modus operandi. Did I ever tell you about that German hit in the 1990s that… Doh!
Speaking of Doh! and wigs, somewhere in the house we have a giant Marge Simpson wig. Just as well I couldn’t find it- it would have flown off during my ‘solo’

@Willsie01 Cheers mate. You didn’t miss much… It was exactly the same as the recording

@DarrellW, well you of all people have to be kind about the intro, as you are almost solely to blame

but ta on all fronts.

@Maggie, going ‘out there’ is rarely the problem… it’s coming back to face the music afterwards that can make one cringe

@roger_holland Thank you, kind sir.
Next time? I’m afraid this was probably my ‘11’ setting. I probably need to recalibrate and go back to learning how to actually play guitar, as opposed to trying to come up with more desperate means of distraction

@SgtColon Cheers, Stefan. It was great you were able to join us. I’m sure part of what you were feeling was the relief/euphoria of your song having gone well

Do you go onto Google with a search term like ‘songs no one on the Community will ever have heard of’?

I’d be afraid some of the musos here would know even those- that’s why I have to do originals. No one knows what they should sound like… Even me

… I must be more prompt in replies. I just discovered the 10 name-check limit in posts

@Rossco01 I did the usual backing track with guitar, drum & bass on the Trio+ and sent it to the usual friends & family suspects. My good friend Chris was the only one who took the bait and provided a selection of guitar and violin parts to choose from.
I threw everything into the reaper pot and gave it a good stir, seasoning with ‘found’ sound fx from the web… voila!
I never really understood the whole views chasing thing. I like sharing with family & friends (like here), but really makes no difference if it was 10 or 10k views

@Bytron08 Syd & Richard are turning in their graves. Roger, David & Nick have put aside their differences to collaborate on one final project called ‘Burying the Blasphemer’
I will be your chief mourner

@crocodile1 Thank you Leo. I’m looking forward to getting the time to check out your new song too. Take care my friend

Even your replies to replies have me rolling around, Brian …

This is fun! Great entertainment value!

@DavidP not if you spell barley without the ‘e’

@TheCluelessLuthier Thank you kindly. I call it ‘smoke & mirrors’

Keep them coming Brian, your efforts are greatly appreciated