Hello again. Here is another old one that I uploaded yesterday…

When I was in “24/7” beginner learning mode if I heard some cool acoustic tune anywhere, I would write it down so I could check it out during my next practice session to see if it was simplish enough for me to do.
I remember hearing this cool intro riff in a random movie that I was watching and thought it would be nice to learn. When I had a look at the chords used for the whole song I found that they were sort of do-able for me at that stage, so I decided to give the rest of it a go.

I had somewhat known of this particular Doors song before then, but it wasn’t a song that I was lyrically very familiar with - so I guess it was a bit harder for me to pick this one up on the go, when compared to other songs that I would normally listen to more often.

As mentioned in one of the comments from my first AVoYP thread, this one has plenty of stuff ups/mistakes… like the strumming is off at times and I kept being late on almost every B7 change because that chord was relatively new to me at the time. But hey at least I’ve got another song to practice now, simply because I thought the intro riff sounded cool

Below are the youtube and soundcloud links of me trying out this song. Feedback and laughter is welcome, thanks… 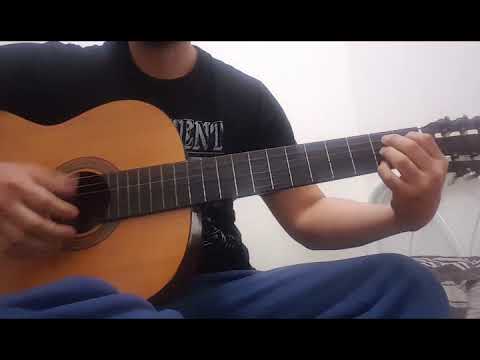 P.S. I only had a small amount of old videos to put up on youtube, in comparison to the larger number of audio recordings that I had uploaded recently. The video versions were usually done when I was comfortable enough to go through a song in one sitting without “too many” stuff ups (i.e. mistakes) - whereas all of my audio versions were generally done before those, during earlier stages of me learning that specific song.

A great tune and your recording is unmistakable, Sandro, so I am smiling, enjoying and certainly not laughing. Keep working it with special attention to the B7 changes, the usual One Minute Changes approach, plus rather than playing the song from start to finish, loop on just the part where you have to make the change to the B7…practice what you can’t do far more than what you can do.

Nice! Totally hear the tune. Is this from Justin’s video? I may have to check this out. Looks super fun, and my style.

Funny, I know the song, but hadn’t thought of it yet! Thanks!

Good effort, not perfect but easily recognizable. More practice on the B7, I need to do that as well.

Yep David, I thought this tune sounded so cool that I fast-tracked it ahead of the other couple of Doors songs that I was trying to learn at the time.
I might try to record newer videos of me playing at some point when I’m back into the swing of things. But in the meantime, I only had my old stuff to share with you guys.

Also thanks for the advice mate: for the parts that I can’t do, I will go back to practicing them like a broken record

Thanks Josh! No, I don’t think Justin had done one for this song when I was learning it (unless he made one recently?).
But I remember looking up the chords/tabs on something like ultimate guitar and then cross checking it with any videos that I could find at the time. That was my usual process anyway, cheers

Thanks Trevor. Yeah I’m planning to get back into practicing, so I’ll make sure to tackle that B7 as hard as I can.

That’s a fine bit of finger-work there, Sandro. Hats off to you!
Your post has inspired me to ‘open the Doors’ and see how I get along.
Strange world indeed

I listened to the audio first, then watched the video. Very noticeable improvement!

So this is an old video? Would be interesting to see a current one of the same song.

Do you always collapse (hyperextend the last joint) of your ring and pinky fingers when playing the 4 finger G5?
I think of that as a technique only used for mini-barring 2 or 3 strings, but I could be wrong.

It sounded fine, so maybe it’s not an issue. But I thought it looked odd, and might lead to muting problems when using those fingers on other chords.

…and isn’t it time to start practicing and download new songs?..you can choose here a song from the best/most impressionable guitar teacher in the world ,and get to work and enjoy this great hobby…(obsession for some

@brianlarsen Thanks for the compliment mate. This recording was a bit rough around the edges, but I quite enjoy playing/listening to this tune so that’s why I put it up

@Tbushell Cheers mate… Yes this was an old video from before I took a break from guitar, sometime last year. I might try recording this one again later on, but it would probably only be slightly better haha.
In regards to the G chord, my hand/fingers do strange things by themselves without me noticing at times… and I guess the “hyperextension” just got associated with the G due to muscle memory. Even if I play a conventional Dsus4 (which I do without hyperextension), I will then auto hyper extend my ring and pinky fingers when transitioning to the G even though those fingers are still holding the exact same notes for both chords. I’m just weird.

@roger_holland Thank you. I think a previous goal that I had in mind when I did these a while ago, was to go through most of my audio files and try to do video versions for them as I kept refining and/or improving a specific song; but unfortunately I got lazy and stopped when other things came up.
However, just sharing my stuff here has renewed my motivation to pick up where I left off, and I’ll see if I can get “new” playthroughs recorded soon. Cheers

Thanks for sharing. This was very inspirational to learn some Doors songs myself.

Really good version.
You’ve a very relaxed style of playing which adds a nice looseness to the vibe.

@Digger72 @SDKissFan Thanks guys. As I posted on another comment, I’m happy to have made other people give their songs a try. I’ve gotten back into it last night and might work on another one to record and post soon. Cheers

Nicely done and very enjoyable. Sounded great on this end and I think you nailed the vibe of it pretty well. Time to really experiment, by adding some vocals!

Keep up the good vibe and rock on!
LB

Time to really experiment, by adding some vocals!

Maybe one day after a few singing lessons