I think the current songbook in the dashboard doesn’t have any default ordering (or if it does, I missed it). The songs seem to be mixed in random order, although always the same one.

This makes the songbook less convenient as it grows bigger.

I think it would bring some real added-value to have a default ordering. Personally, I’d love if the songs were ordered by difficulty level for example, or by artist.

Hopefully this little remark can be implemented sometimes in the future

Thank you for the great work done on this website!

Edit : this thread is about the “personal” songbook, in the dashboard =>

@qwerty1928
There are options for sorting already …

At the top of the song list is this: 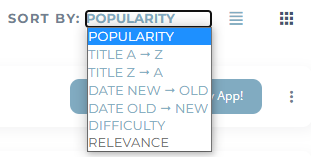 On the left, as you scroll down, is this:

You can also search by Artist, Difficulty, Books & Apps and Genre

Hi, thank you for the response

I actually don’t mean the main Song screen (which has plenty of sortings, indeed), but instead the one where you can see the songs you “saved”). This one =>

I like to go check my “own” songbook every now and then to get an overview of my repertoire, and having it sorted would make the experience even neater. But hey, that’s only a small thing and I’d totally get it if it’s not a priority

@qwerty1928 Now I understand. Looking at your screenshot could it be they have default sorted by grade?

@Richard_close2u Ah the screenshot might not give the best representation. They are not sorted by difficulty, neither by artist/alphabetical order. This is not the order in which I saved them either (but that would be less helpful anyway).

This one should give a better idea :

@qwerty - you’re right. I have just gone and added some songs at random to my own songbook and the order is itself random with no option to sort.
I will pass this on to Justin’s team as a potential issue to address and improve.
Cheers
Richard

Great! Thank you very much

I’ve seen this but this improvement has now lot all the songs I had listed!!!

I’ve seen this but this improvement has now lot all the songs I had listed!!!

I’ll take that back. They are under favorites not Songbook!

Glad it is okay.
I hope it is what you need.

I hope it is what you need.

Not sure to be honest. What’s the difference between the three sections?

Check this video to understand the three categories

3 Types of Songs You Should Practice (To Play Guitar Better)

Oooh, this is really great !

This is actually much more than anticipated. Not only can I order the songs myself now, there is also the possibility to have multiple lists

@Stuartw the 3 categories are default list, but it’s also possible to remove them // add your own lists instead

This offers much more flexibility than before (where the songbook was not editable, and basically a copy of the favorites)