Stereophonics - Everyday I think of money

This is a song from one of my favourite bands the Stereophonics called “everyday I think of money “. In Justin’s recent video on “how not to suck at singing “ one of his tips was to picture the voice you would like to sound like. For me that voice is Kelly Jones as IMO he could sing the ingredients off the side of a cereal box and it would sound great.

I am no Kelly Jones but I hope you enjoy all the same. 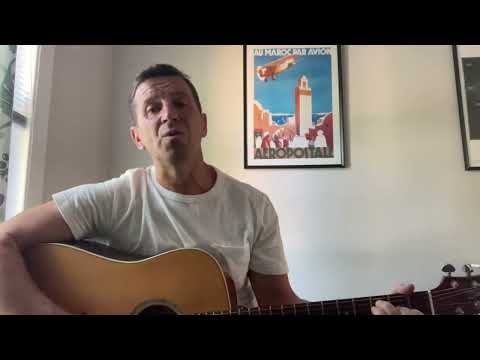 Superb stuff Eddie. I do dig a bit of Stereophonics. You had more than enough education to perform that one mate. I look forward to you performing the song that was missing on that album when it was first released. That was top stuff, played and sung very well. Next time try to get that camera angle to capture all of your guitar so I can watch closely and learn from your playing.

Thanks Rogier for checking it out and commenting. Much appreciated!

Thanks James and glad to hear you like some stereophonics! Will take note next time and try have my guitar in view. I don’t have any fancy recording equipment so am doing everything off an iPhone in the kitchen. Thanks so much for taking the time to listen and to comment. Will check out that missing song you mentioned! Cheers again

Thanks for taking the time to listen and comment Dave. Glad you enjoyed it!

That was great Eddie. Your voice is full of character. Clean chords, steady strumming pattern too. Well done.

Thanks Gordon and thanks for the heads up on the guitar maybe being slightly out of tune. Will check that out. There are quite a few minor chords Dm , Am in that song which gives a slight sadness to the sound. I Appreciate you taking the time to listen and comment.

Full of character Eddie, the guitar is solid and clean giving just the right platform for a compelling performance.
If thinking of husky Kelly helps you get there then keep on with the thoughts.
Great stuff.

Thanks so much Richard for the feedback and the encouragement to keep going. I am kicking myself I didn’t join this community earlier as the experience has been incredible.I feel myself growing and I am learning so much from everyone here. !!!

That was wonderful Eddie. So much emotion in the song. Your playing and singing are great. Nice song choice as well.

Thank you Ron . I appreciate your feedback! Thanks for taking the time to listen and comment!

Thanks Stefan. Yea it’s one of their lesser known songs but it tells a good story. Glad you enjoyed it and thanks so much for taking the time to listen and provide feedback.

Nice job @Eddie_09 really got into vocally as you got through the song. Big fan of the Stereophonics since their first Album Word Gets Around in the late 90s. Often play Boy in a Photograph which is another great song. Kelly has a great way of telling stories.

Thanks Jason. Local boy in the photograph is a great song alright. Thanks for taking the time to listen and provide feedback. Really appreciate it!

That was nice, Eddie. Interesting how you are putting conscious effort into your vocal, which sat nicely supported by the guitar.

That was fabulous, Eddie, enjoyed your vocal and the playing was smooth and steady throughout. Lots to like.

If I recall correctly your also played some Springsteen recently, that was just as good. I’d say you’ve got this vibe nailed and look forward to more.

I really enjoyed that Eddie. The guitar was great with a solid rhythm and the vocals had character and expression. I am not familiar with the song or band, but I think I will have to look them up.