The Doors have been on my mind the last couple of days. Sandro (@Dro_1) recently posted a nice fingerstyle version of People are Strange and @TheMadman_tobyjenner’s missing mojo reminded me of Jim’s anagram, Mr. Mojo Risin’. I mentioned Strange Days on his thread and that led me to looking up chords and lyrics for the song on UG.
Well, less than 24 hours later, here’s the unpolished diamond.
Hehe, not signing up for the OM, means I don’t have to keep playing the same song! 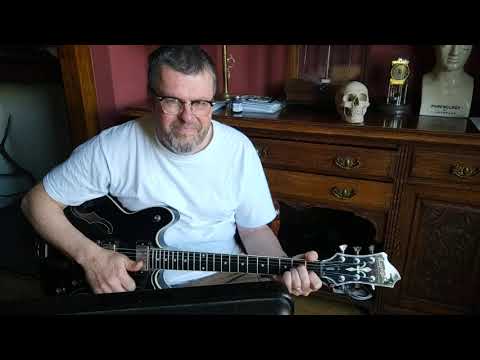 Long time since I heard this but good to see you getting down and dirty here and there. Certainly a diamond but I dispute it being unpolished. You appear to be on a roll sir !

Well, what do I want to say here…
Brian, sometimes unpolished diamonds are very good

Hi Brian,
That was a nice performance and certainly considering the speed with which you have prepared it and calling it a diamond in the rough I look forward to the day it is polished…nice distortion is in it …is that the guitar or the amp…or both? strange days,…where what how???
Greetings

Good job, Brian. I enjoyed your earlier Doors reference and the anagram … now there’s a great song (LA Woman). I also think that their debut album is one of the all time great debuts. And Strange Days was a pretty good album as well. I don’t think there material is the easiest to pull off on solo guitar but with a little help from your Trio and amp you’ve delivered a fine rendition.

@roger_holland Yes, I was kind of curious how quickly I could get a rough version down with this one. I’m using three different preset tones on my amp which I control with a wireless footswitch. I don’t use it that often and it often throws me

They had some cracking songs, although I never bought into the Morrison cult.

Hey Brian. I’m only a newbie on this website, but I’m happy to have “opened the Doors” for you as you put it, haha.
The fun thing I find about this community is that people share and bounce ideas of each other… so it’s an honour to have been tagged as one of the reasons that you decided to try one of their other songs out. Nicely done by the way!

Not a bad compilation, Brian, but I reckon it is worth listening to some of the original albums … The Doors, Strange Days, Morrison Hotel, and LA Woman (OK that’s about half the entire discography).

The Doors was popular Friday post varsity music on the corridor I stayed on in the residence (hostel). And we’ll need talk about the rest of the late afternoon activity for which it was the soundtrack

Haha, you have no idea

Many of us have been ‘bounced’ into performing songs we had no intention of covering or even worse: press-ganged into collaborations with musicians far above our pay-grade

As you say though, it’s all good fun… and great experience

Well you certainly got the Doors vibe going with that one Brian. Great use of your footswitch to change tones at the ‘yeah’ bit. Loved that.
To use the diamond analogy you’ve displayed another facet of your ability there. To get a new song up and running so quickly is testament to your ever evolving skill set.

Despite not being a Doors expert, I’d heard that song before. Things are looking up with your repertoire. Before you know it folks will be calling you a populist!

ps. I’m intrigued as to what @DavidP got up to on a Friday afternoon.

“YEAH!” You truly scared me!

But the song was well done. Thanks for the listen.

YEAH! That’s what I am talking about… A true diamond in the rough there Brian! Not quite Morison, but you put a good spin on this one. If the Inn is not open, you need to fire it back up and greet guests with this one!

Hehe, not signing up for the OM, means I don’t have to keep playing the same song!

Another fine performance from Mr B, you did well and rough edges like these make it all more interesting!

Great stuff Brian, like me a bit of the Doors!
Keep ‘em coming!

Unsettling and foreboding and it sent me straight to Nina Simone’s version of Strange Fruit. Powerful stuff Brian.

Loving the Doors-fest; one of my top 5 bands.
Great to hear Strange Days get an outing.
You did Jim’s vocal great justice.

I always wanted to do a cover of Not To Touch The Earth. I need to start badgering Katja.

This song takes me back Brian

I wasn’t around for the original of course (come now, I am not that old) but they had a revival of interest in the early 80s and I knew a lot of people who played Doors all the time.

Dig that transition to the key change.
Some great dancing on the fx from you.

We didn’t even know how “strange days” could get when this was released. It was a bit playful and joyful back then in a dark humorous sort of way. Kind of a throw away really. Now that we are in an Orwellian vortex of authoritarianism, I find it far more ominous, special and prophetic. You found fertile ground (once again) with this one. Mad respect, sir!

Good on you to bring this up for re-examination in a topical context. When you threw on the dirt, I felt it, and I dug it. Ultimately we hear what we want to hear, and believe what we want to believe. One thing is for sure, we are going to need a bigger hand cart for where we are going. Well done my friend.

Great use of your footswitch to change tones at the ‘yeah’ bit. Loved that.

Cheers, Gordon. That’s the kind of footswitch I’ve been persuading you get for your Katana. I rarely use it for practice, but if I’m recording/performing it adds another string

Haha, I think I’ve run out of obscure songs for the time being. My work must be nearly done!
I’ll have to join the masses and learn how to play prop’ly

@pkboo3 Thanks Pam. And thanks for the PM

@LBro Right back at you Dude. Happy to hear the Old Head is still around too

@adi_mrok Cheers, Ade.
Haha, my in-laws are visiting next week, so I think not, although I hope to slip away to watch some of it. You never know, I have crashed a few parties in my youf

@DarrellW Ta Darrell. I think they had something for everyone who grew up during that time

@batwoman Now there’s a song that makes even me shiver

@Digger72 Happy to see you were out on maneuvers yesterday. Lots of posts

I was hoping that was a foreshadowing of something comfortably strange winding its way into the community. Get the mojo working, man

@Richard_close2u Yes, I read Nobody gets out of here alive in college in the 80s and saw the Oliver Stone film when it came out.
Tbh just launched in and learnt this in a bit of a rush, not noticing any key changes

Funny you mention it though. The song I started working on yesterday is in minor until it changes to an uplifting major chorus, but much happier than the ol’ circus story (take note: happy and well-known, @sairfingers

)
Having to incorporate footswitches adds another layer of complexity, but like everything, with practice becomes much more manageable.

@CT. Thanks man.
If you dug it, that’s good enough for me

We all live in our own private Idahos.
Having grown up in Beirut, lived with the cold war Armageddon threats, seen ‘The troubles’ in Northern Ireland, and witnessed countless wars on TV, nothing really surprises me anymore.
Re-calibrating and adapting to new circumstances are about the only things we humans do well (apart from playing guitar of course!)
I’m fortunate and in a good place, thank goodness.

What a great rendition of one of many interesting Doors tunes (and yes, I am old enough to have been around when The Doors debuted, and Light My Fire was playing on AM radio every hour!)
You didn’t have to, but I see you cleaned up for this take. Kinda goes against the Jim thing, but hey, these are strange days