I have a Strat. With the guitar sitting comfortably on my right leg and my right arm perched comfortably on the body of the guitar, I find the pick is contacting the strings just over the last fret. It takes a lot of effort for me to keep my arm in a position where the pick lands between the first and second pickups, which I feel is the “correct” position for it. If I start with my arm in the “correct” position, by the time I’ve played one major scale up and down, my arm will have slid forward and the pick is back over the last fret. I.e. when I focus on my fretting hand playing the scale, I forget about my strumming hand.

I tried using a strap, but it tended to pull the guitar back which made the problem worse. Moving the guitar postition on my leg doesn’t work. The scallop in a strat’s body is always going to centre itself on your leg.

This wouldn’t bother me, except occasionally the pick catches the fretboard on the down strum instead of the low-E string. Obviously this sounds bad.

Should I work on keeping my arm back, or accept this is my “natural” arm position and instead work on not digging the pick in too deep?

What do you mean by arm perched comfortably?

An electric is probably too small to do the acoustic rest elbow on top thing, you need to either not touch the guitar, use part of your inner forearm as a pivot/touch point or wrist on/near bridge depending what you are playing and how.

I play a strat too. Had this problem early on.

Adjust where you rest your forearm on the body of the guitar. Ideally you want to be strumming somewhere over the pickup are, not the fretboard.

Doing some palm muting practice (if you’ve learned palm muting yet) might help with adjusting to a new position.

I’m switching between a dreadnought and a strat and had the same issue in the beginning. As @RobDickinson pointed out,

use part of your inner forearm as a pivot/touch point or wrist on/near bridge depending what you are playing and how.

helped me a lot. Also taking care of my sitting position. With the acoustic, I tend to “hang” a bit over the guitar body. Playing the electric, it was helping to move my right shoulder a bit backwards, so elbow goes back too and my forearm comes into the right position.

What do you mean by arm perched comfortably?

Perhaps some pictures will help explain it. The first picture is where I start and the second picture is where my hand tends to end up. I’ve just noticed in the first picture that I’m resting my pinkie on the scratch guard. That probably explains another problem I was having- occasionally missing the A string with the pick when going back down the major scale (i.e towards the ceiling). I’ll avoid doing that in furture. 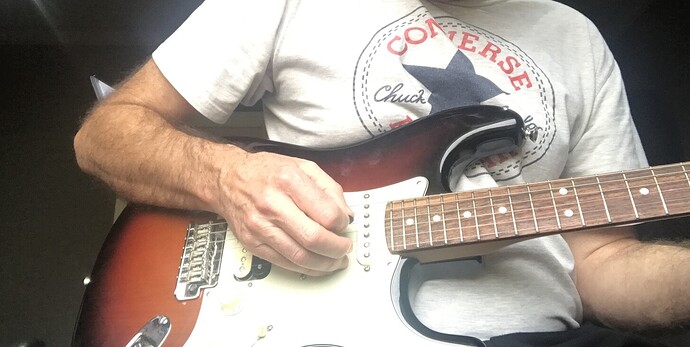 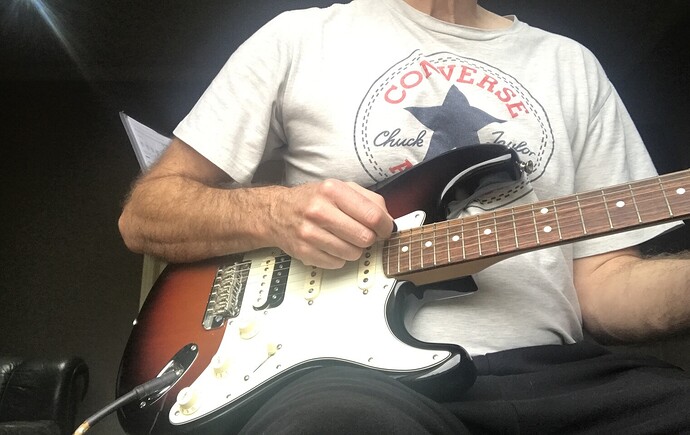 Doing some palm muting practice (if you’ve learned palm muting yet) might help with adjusting to a new position.

I’m switching between a dreadnought and a strat…

I’m doing the same. I’m sure it doesn’t help.

With the acoustic, I tend to “hang” a bit over the guitar body.

Me too- because I still need to look at the strings!

I’ll have look at my seating position and try some palm muting.

I’m doing the same. I’m sure it doesn’t help.

No, that doesn’t help… It’s a matter of the pure size of the guitar. I feel quite comfortable with the acoustic, but the strat feels a bit weird at first, everytime I change. Plus, in my case, it tends to tilt backwards and forwards, I don’t have that much control even though I use a strap.

Me too- because I still need to look at the strings!

You are in good compagny

As Rob mentioned, adopting an acoustic sitting position with a strat is going to result in this, because the body is that much smaller/slimmer. You need to adjust your position.

Personally, I sit up straighter and ditch my footrest, lowering the guitar. Then I move my elbow right and backwards, so that my mid forearm rests on the guitar. In fact, my arm looks very similar to your first photo. It works fine but I do find it takes more effort as my strumming arm is not hanging naturally. That’s why I generally play my acoustic sitting down, and my strat stranding up.

Just one other thing… what is the “right” picking position? Bear in mind that you can get different tones from your guitar based on where you are picking, so technically there probably isn’t a “right” position.

The guitar looks too far around the side of your body. I had a similar issue when I went from acoustic to both my Telecaster and Les Paul. So your hand/arm is most likely in right default area, its the guitar thats out of whack.
From my experience I’d persevere with a strap, and get the guitar off your leg. Everything fell into place for me after that. Once you get used to it, you’ll find you can move around a bit without any real hassle.

Thanks guys. I’ll experiment with your tips in the morning and let you know how I go!

Electric guitars are designed to be played standing up. Have you tryed standing when playing?

If it’s any consolation, I’m watching an Eric Clapton documentary on Amazon now and Clapton spends all kinds of time picking on top of the last four frets.

The scallop in a strat’s body is always going to centre itself on your leg.

I have the same problem with my cutaway acoustic.

When I try to play in the casual position without a strap, the bout of the guitar sitting on my right leg pulls it to the right, and pulls my strumming hand way out of position. Ends up over the fretboard, not the sound hole.

When sitting, I find a pseudo- classical position with strap works better. I owned a couple Strats in the past, and this seemed to work with them too.

Chair height might make a difference too. I’ve experimented with raising my seat with cushions, so my knees are lower than my waist, which seemed to help.

But I get the most comfortable approximation of casual position when I play standing up.

Where you pick has a significant impact on the toan, I’m sure Eric isn’t doing it by accident

Glad to hear I’m not the only one this has happened to. I had a PRS and switched to a Strat and was practicing daily and noticed, after a week or so, pick scuff marks on the fretboard. It was only then that I realized what I was doing. And I play standing up.

Now I’m more conscious of it and try to strum between the pickups. I have a very stiff rt shoulder which makes it a little tougher and difficult to palm mute. Now I try to remember to loosen up the shoulder before I start - will concentrate on the palm muting and see if that helps. Appreciate the tip.

Thanks All. Good to hear I’m not the only one who’s experienced this. I’ll spend the day experimenting with playing standing up and messing around with my seat height.

If all else fails, I’ll claim I modelled my playing style on Eric Clapton!

That’s why I generally play my acoustic sitting down, and my strat stranding up.

Electric guitars are designed to be played standing up. Have you tryed standing when playing?

But I get the most comfortable approximation of casual position when I play standing up.

Based on these comments, the first thing I tried was playing standing up, and it instantly fixed my hand position problem. The pick now falls between pickups 1 & 2 with no effort on my part.

Playing while standing isn’t as difficult as I imagined it would be. It’s quite comfortable, and probably a lot better for my ageing lower back.

Thanks Rob. I’ll keep an eye on that.