The Circle of Fifths Part 2 - isn't it the same as the circle of fourths?

The Circle of Fifths is our main focus.
Categorically, absolutely, without a shadow of a doubt.
We are here to learn about and consider the Circle of Fifths.
Yet it would be remiss of me not to mention that it has two names and can be viewed in two ways. Many musicians know it and refer to it as the Circle of Fourths.

We saw how the overlapping four-note clusters, when read from left-to-right, connected to a matching partner, and then transformed to leading around a circular arrangement in a clockwise direction yielded the 12 notes of the Circle of Fifths.

The 5th notes were seen where the next major scale in the clockwise direction started. The 5ths were where the four-note clusters joined together. Consider that when two things connect and a join is made, there are two sides to the join. Two parts that meet up, that connect and are bonded. On one side of our join we have the 5ths. On the other side, self evidently, we have the 4ths.

We would see the major scales connect and lead to this succession of scales.

F# major to B major

B major to E major

E major to A major

A major to D major

We are reading the topmost major scale from left to right until we reach the 4th note of the scale. That 4th note gives the start of the next major scale which is shown below. The overlaps clearly show the matching clusters of four notes between each pair of scales.

Taken as individual notes based on the major scale root notes we have this order of twelve notes.

We would see the major scales connect and lead to this succession:

We have seen that somewhere before haven’t we?

Pauses for reflection and consideration.

That series of twelve notes built on the 4ths matches exactly the twelve notes on the Circle of Fifths … BUT … when reading anticlockwise around the circle.

We have created The Circle of Fourths 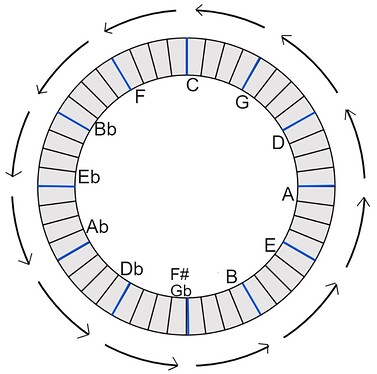 The Circle of Fifths is, simultaneously, the Circle of Fourths. Depending on whether we read around the circle in a clockwise or an anticlockwise direction.

Some musicians prefer their reference to be the viewpoint of the Circle of Fourths and place that clockwise around the circle, meaning on such circles the fifths read anticlockwise. That is all down to preference and usage. There is no inherent difference between them apart from their circular direction.
Some musicians spend their lives playing in keys with lots of flat notes and they may prefer to view it as the Circle of Fourths. Not guitarists of course - ask a guitarist to play in the key of Ab and they might just choke on their own horror!

Anyway, after this little sojourn, the next part will take us nicely back to the Circle of Fifths, in a clockwise direction.

All good stuff Richard and a timely review. Will have to park your latest excursions, until the family are back in Blighty. Keep up the good work.

Some musicians spend their lives playing in keys with lots of flat notes and they may prefer to view it as the Circle of Fourths.

Obviously, on guitar C, G, D, A and E (circle of 5ths!) are the most common keys. I think Bb and Eb (?) are associated with horns (trumpet, sax). For example, I’ve heard that Johnny B. Goode was pitched in Bb to accomodate the horn section (wait, are there horns on Johnny B. Goode?)

Also, I think I read somewhere that expert piano players prefer to play on the black keys, does anybody know if that is true? I’d be curious to find out which keys are “typical” of which instruments and why.

I think Bb and Eb (?) are associated with horns (trumpet, sax).

Yes, a standard trumpet is tuned to Bb (with a limited range of about two octaves) and a piccolo trumpet to Eb.

I don’t know any technical reasons and am no piano player so this is my imagination answering - the black keys present a changing landscape (two together then three together) so give the player some points of interest and waymarkers to keep them alert and able to navigate, rather than the flatlands of the unbroken white keys.