The Circle of Fifths Part 5 - where does it go? [c] major & minor chords

We now move on to a further aspect of the Circle of Fifths. One that is shown readily and automatically on most diagrams of it. Many of you may have wondered at its omission until now. We move on to what I presume and hope will be the favourite part of @brianlarsen (it involves the inner wheel and minor chords).

We will take two paths to arrive at the same destination. We will follow two stories to reach the same ending. One a little winding and fanciful, the other short, straight and direct.

We saw previously that selecting any seven consecutive notes around the Circle of Fifths will yield the seven notes of a major scale where:
1] the root note is in the second position (when reading clockwise);
2] the order of the scale degrees reads 4, 1, 5, 2, 6, 3, 7 (also reading clockwise).
We also made the leap to considering these scale degrees as root notes of the chords in the key and saw that the 4, 1 and 5 are a match with the IV, I and V chords and sit right alongside one another. Those three chords are all major chords. This small reminder of a harmonised major scale and its diatonic chords shows it.

The major chords, as already seen, are grouped together in a cluster of three. Let us take it that they be fixed in those happy positions. Notable now is that the minor chords are also together as a small cluster of three.
The diminished is stuck out at the end, poor thing.

Looking at the C major scale again. This time in a slightly redrawn circle with all other notes and the colour scheme removed. 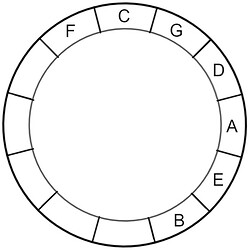 The IV, I and V (F, C and G) are in their positions.
What if we were to dislodge the other four notes (now being considered as minor or diminished chord root notes)?
What if we gave them a little shove to displace them and make them float free for a while?
Like so. 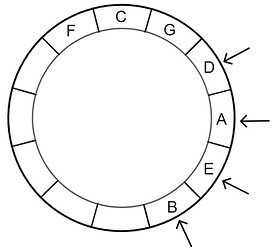 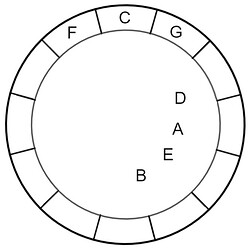 What then if we were to give those four a small push anticlockwise so they began to nestle together with the fixed IV, I and V? 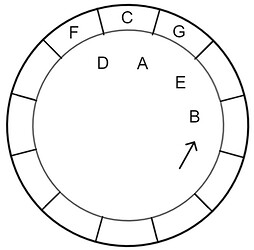 As the four move around, we clearly see that there are seven notes in total. If we wish to organise and tidy and store these, they would naturally fit together as three pairs with one left over.

Think of having seven eggs and a box that only takes half-a-dozen. We need to house our clutch but we must leave one exposed, alone, separated from its eggy-mates. 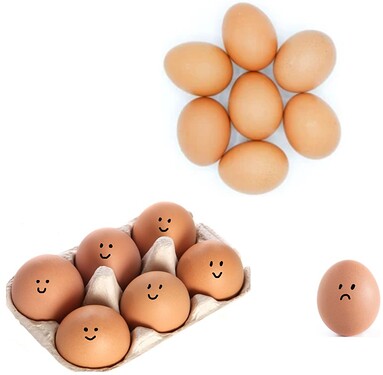 On the Circle of Fifths we can accommodate our minor chord root notes by creating three new little homes and slotting them right into place. 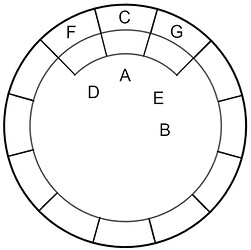 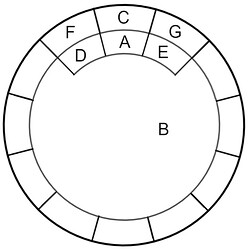 All that remains, given that we are considering these are root notes of chords, is to complete the labels.

On the outer wheel are the IV, I and V major chords we ascribed as being ‘fixed in position’ earlier.

On the newly created inner we have the ii, vi and iii minor chords.

Plus the diminished chord. 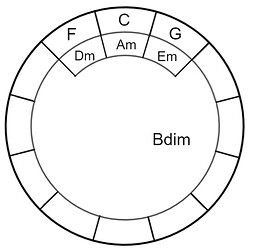 The lone soul with no place to call home.

Even its name suggests its deprived status – diminished.

Turning our attention to the now familiar Ab and E notes around the Circle of Fifths and completing the exact same process would produce similar results – the major IV, I and V on the outer wheel, the minor ii, vi and iii within and the solitary, outlying diminished having no place to call home. 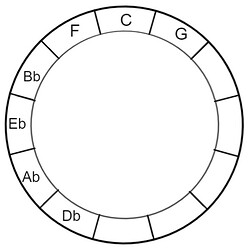 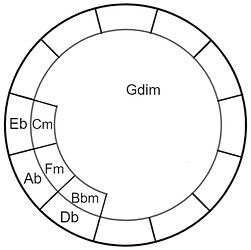 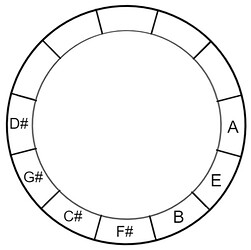 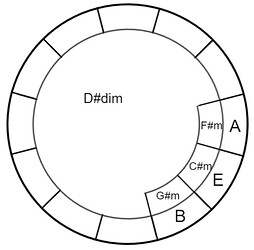 Combining all three of these results would now produce a Circle of Fifths that looks like this: 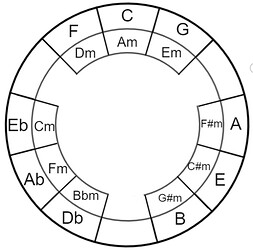 Note that for the sake of simplicity and clarity, I have removed the diminished chords from this view.

From just three start points, from the three major scales of C, Ab and E respectively, we have almost created a complete set of outer and inner wheels. When the outer wheel is considered to be major chords, then the inner wheel can be labelled as minor chords.

These pairings may have seemed to have happened randomly and brought about simply by displacing the notes from the outer wheel then pushing them around anticlockwise in their existing sequence (which left the diminished with no partner). But perhaps the pairs belong together with ties that are stronger than mere random pairings. Perhaps these are marriages made in heaven.

A quick analysis of the chord notes may allow us to take a sneaky peek into these marital homes.

We agreed that the IV, I and V major chords would remain fixed in the positions on the outer wheel.
We did agree that didn’t we?
We then dislodged four notes, taken as the root notes of three minor chords and one diminished chord. These could, potentially have floated around and landed in one of many places. Meaning that each of the three already-fixed major chords could, potentially, have found itself married to any of four other chords. But that did not happen - random pairings did not occur. Instead, the 2, 3, 6, 7 ordering was maintained. Thus the 2, 3 and 6 aligned with the 4, 1 and 5 already placed.
To get a clear view as to whether our efforts at ‘match-making’ have been successful, we can see most easily through the windows of the home of the harmonised C major scale.

Wow.
Look at that.
Of the three notes, they have two in common.
Marital bliss.

Next, let us take a wee sneaky peek in to the private affairs of the pairing of the I chord C major and the vi chord A minor.

Finally the pairing of the V chord G major and the iii chord E minor.

Another wonderful match.
Another pair with two shared notes.
What marvelous compatibility.

We do indeed have some happy pairings. All chords comprise three notes - they are triads of course. Viewed together as pairs, all major-minor chordal relationships have many aspects in common. As Meatloaf once song – two out of three ain’t bad.

Analysis of the Ab and E pairs would reveal equally joyous couples all enjoying a blessed togetherness.

All is good and harmonious in the world.

Our examples have created a new aspect to the Circle of Fifths – an inner wheel. That inner wheel will be used to depict minor chords when the notes around the outer wheel are considered as depicting major chords.

What then of the three gaps on the inner wheel?
What should go there?
The lonely diminished chords that have been left floating in limbo since being kicked out of their former homes?

No, to put it bluntly.

They will fill with other minor chords, of course.
They could be filled by selecting from several starting major scales around the outer wheel. Remember, the process we have just witnessed housed three minor chords for every one major scale. There are many overlaps.
There is a temptation to set this as a next quiz but temptation shall be resisted. All will be revealed.
Soon.
For, coming up next, is the other story, the more theoretical one, the one that has less flight of fancy and more nitty-gritty. Once it is told, we will have a complete inner wheel.

This alternate tale makes use of brevity and relies on remembering the little trick of using right-angled pointers to identify relative major and minor scales.

Let us start on comfortable and familiar ground before we venture to new territories.

Using this new concept of an inner wheel, we could depict those relatives thus: 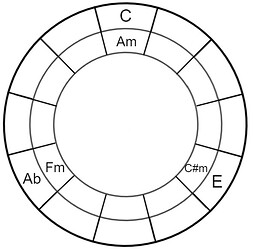 Those are just three examples of relative major-minor scale pairings. There are, of course, twelve major scales each having its own relative minor. Using the right angle pointers we can quickly identify all at once.

Starting at the 12 o’clock position with C major & A minor and moving clockwise each time, the following diagram has right-angled pointers which show all twelve major scale - minor scale relative pairings. 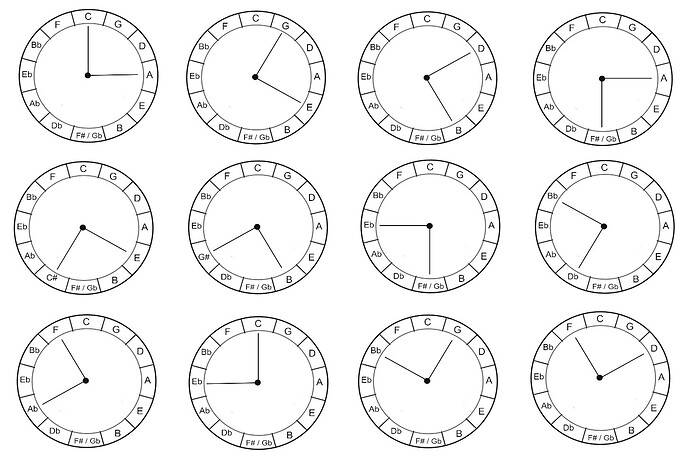 We reach a swift conclusion to this story and a happy ending for all.
A picture of domestic bliss, joyful unions, harmonious homes.
And they all lived happily ever after.

The complete Circle of Fifths with both outer and inner wheels. 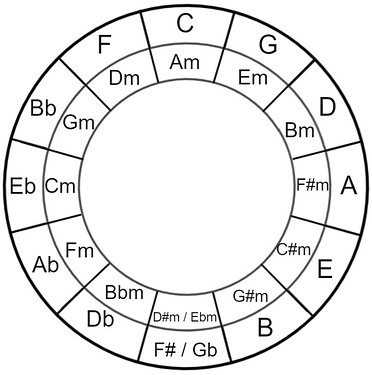 And I’m chuffed that you dropped by and brought your wit with you.