We have now seen how taking a full grouping of six chords comprising three major from the outer wheel and three minor from the matching portion of the inner wheel give us the six main chords of a major key, the six diatonic chords of a major scale. And from that basis, using some or all of those chords in combination, we can play thousands of songs.
In the practical theory course Justin lists ten common chord progressions, using the Roman numeral system.
They are:

It is worth pausing here and taking some time to explore these ten progressions.

It will be valuable to take some time and linger in this space, to experiment, to try things out to have fun, to stretch and listen and see what sounds good. You will likely hear some familiar progressions that you can identify and associate with many songs. You may, hopefully, create some progressions that inspire you, make you want to hum a melody, write a lyric, compose a song or record a looper backing track to improvise over (using the appropriate major scale for your key).

Have fun and enjoy the simple act of doing here, being musical.

The six main diatonic chords we are looking at here need not be confined to triads or simple major and minor.
As a minimum it is worth taking one or more of them as extensions to a 7th quality.
We would we have, in that case:

One of my favourite examples of an entirely in-one-key song that makes full use of all six of the main diatonic chords has the following progressions: 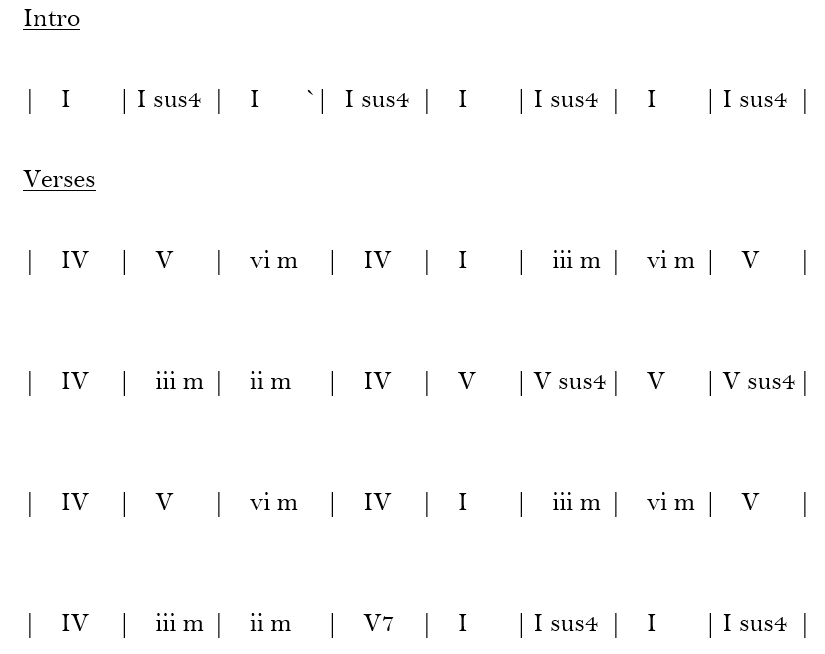 I will leave it entirely up to the individual to choose a key to follow here. Be aware - choose carefully or you may end up having to play lots of barre chords. Play it at a decent tempo in 3/4 time and see if you can figure out which song it is.
Have more fun.

Having just encouraged people to spend a long time lingering in the world of major key diatonic chord progressions, it has to be acknowledged that there are many among us who prefer to inhabit the minor key domain. With that in mind, it seems fitting and fair to offer up a view of the double-wheel Circle of Fifths from the perspective of minor keys. Specifically, natural minor (which I should really call Aeolian). That is to say, making use of the relative minor of any chosen major. We have already seen mention of the relative major - minor briefly in passing.

The obvious place to start is by considering C major and its relative minor A minor. Once again, here is the harmonised C major scale, showing its ordered diatonic chords.

The relative minor is based on the 6th scale degree so it is a simple process of reordering those notes and chords to start from the note A and the chord A minor.

Allocating each chord its Roman numeral gives us this on the Circle of Fifths: 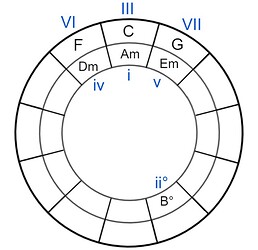 Note that on this occasion I have used the position of the note B to show the location of the B diminished chord. I am doing so here as diminished chords just to help it see the light of day for a moment. Also, diminished chords do have a useful place within minor chord progressions which is beyond the scope of this topic but is good to be made aware of.

Replacing those key specific chord names and replacing them with just the Roman numerals gives us this arrangement. 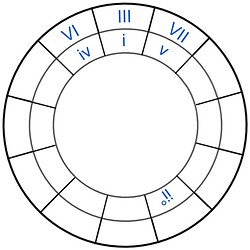 This becomes a general pattern that can be rotated around to rest at any of the twelve positions on the Circle of Fifths and helps define and locate the positions of the seven diatonic chords of any (natural) minor key.

Note that the diminished ii is not within the neat cluster of six. It is fairly easy to locate however as it sits directly opposite the minor IV and the major vi. This may help us to learn and remember the locations. In a minor key, the even numbered chords (ii, iv and VI) all align along an imaginary diameter line. 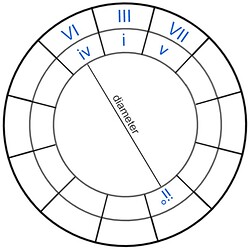 Up to the brief mention above, we have largely ignored the diminished chord, other than acknowledging its existence as the odd-one-out of the seven diatonic chords and noting that it does not group together on the CIrcle of Fifths with the others. For the sake of consistency and simplicity, it makes sense then to strip it away from the diagram presented above and just revert back to having six labelled sections. 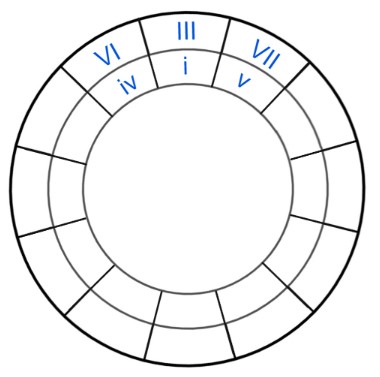 Be aware that there are some commonly used minor key progressions just as listed above for major keys. This statement comes with a rather large BUT. This will be addressed a little later on. And the BUT will need to acknowledge that many minor key progressions do not follow strictly diatonic paths, but use at least one (very important, dominant) chord not naturally found in the key. For now, just use what is listed.
And have fun.

Just as with the six main diatonic chords of a major key, the chords in a minor key need not be confined to triads. As 7ths we have:

Beware the dominant VII chord - it will sound like it wants to pull to the parent major chord taking you back to a major tonality with the III as tonic (think G7 pulling back to C major). Whereas you want to maintain a sound that remains in the relative minor. So perhaps play that as a straight major, not a dominant 7th.

For example, in the key of Bm, I have created a diatonic progression that makes use of extensions (7ths) and sus variations.

B minor progression with 7ths and sus chords audio file

Here is an accompanying pdf of the TAB.

Addendum for how to approach this chapter.

Take your time reading the content.
Take more time applying it in a practical way.
Pick up your guitar and play!
Play some more.
Play major.
Play minor.
Have fun.

Thanks Richard. This one will require a bit more study than your six previous posts. I found this free app which seems really good. No annoying ads either. Under the circle it shows you how to construct the major and minor chord progressions for the chosen key. 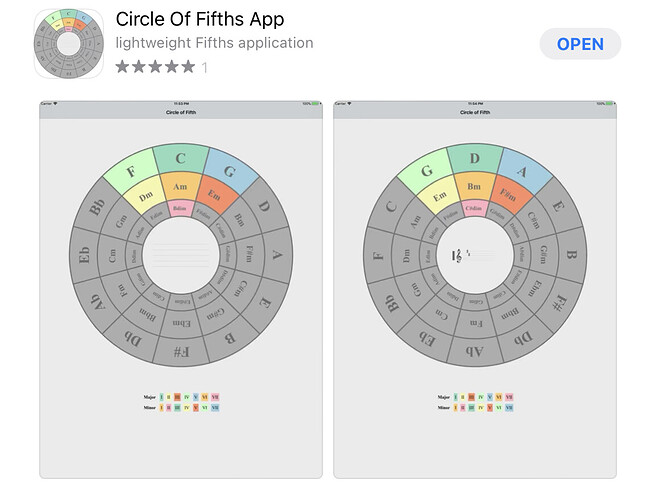 Thanks @jacksprat
I know in the old forum that @TheMadman_tobyjenner shared a really useful tool for the circle of fifths. I don’t recall if it was an online tool or an app. It had a similar functionality from first glance at this you have shared. It could rotate so any note sat at the 12 o’ clock position. And it had a third part, another inner wheel, where the diminished chords could be found. Great stuff.
ps I will not be adding a third wheel with diminished in this topic.

There were a couple and one was browser based but I ended up using this on my tablet, so I have visibility while working on the PC.

All chord voicings can be played but it also notates the “progression” which can be copied to other media (word, text etc). And it can be easily changed from Major to minor.

I’ll see if I can locate the browser one(s) and link here.

OK found it quite easily despite the myriad of bookmarks in the Guitar link sub folders.
What I like about this one is the selectable modes, which can come in handy now and then.

This was the other browser based interactive “tool”.

Should add I did not particularly like the layout of this one, with IV I V in the inner circle.

When I posted a few weeks ago at the time of Part 1 I said it was perhaps ahead of where I was in Grade 3 Theory, and I would come back to it at a later date, so I didn’t expect it to be back quite as soon…

So, what happened was that I got the Tabs App and disappeared down a rabbit hole about transposing songs to different keys.

I realised, although I was aware of the following, I didn’t have a clear understanding of how it all fitted together
• Major Scale
• Keys
• Circle of fifths
• Chords in a key and numbering
• Notes in a chord

So, I decided to work my way through the various parts.

Richard @Richard_close2u must say the presentation and way you went through it was excellent. I am the sort of person that if you just gave me the Circle of Fifths and said this is how to use it, I would want to know how it was all put together, which you did. Also liked the way it was developed in stages so you could take in each Part before moving on. Did have to divert occasions to find out things like I didn’t such as what a diatonic chord is.

I appreciate I now only have a very basic and limited overall framework of how things fit together, but I think it will now enable me to fit in the vast number of things I don’t know about that exist, when they come along.

I see that there is now a Part 8 but is there a part that is going to deal with transposing chords into different keys. although I think I do now know how to do it.

@MAT1953 Thank you so much for your kind words and appreciation. Knowing that you have gained some musical knowledge and understanding, and enjoyed the experience as you went along, is humbling and heartwarming.
I do have further instalments though I not one explicitly looking at transposing from one key to another. Perhaps I should make a further part looking at that. It follows on simply from some of the implicit comments so far in this overall topic and can be presented readily I would hope.
Cheers.

Thanks for the reply.

As I mentioned I got bogged down with transposing because as I am just at the end of Grade 1 guitar and have watched a lot of Justin’s beginner song lessons. In quite a few he says the chords have been ‘changed’ so they are playable with the basic chords you have learned, a lot of them start with the use of a capo to match the original and then get changed. I needed to know what was going on, it is just the way I am.

Obviously there is a danger of introducing too many music theory things at the early stage of the guitar course and if you are interested you get involved in the Theory course, which I did.

As you say having developed the Circle of Fifths this far the ability to transpose is there perhaps a simple explanation of how to do it would be helpful.