Warning: mildly offensive language and irreverence towards the Christian church

Well, this was unexpected

I shared the original of this yesterday on the what are you listening to thread and @DavidP mentioned he could see me covering it with my Hagström and Trio.
I laughed because I was just messing about with a bit of lead on my re-discovered Peavey Vypyr amp that I bought a couple of years ago, but never understood nor used.
I thought why not, downloaded the chords and lyrics, and set off.
I’m aware I often play ‘predictably’ and slum around my comfort zone, so decided to push the boat out on this one.
Most of the guitar is picking rather than strumming and I used one of the higher gain amp presets. I tried to use it more to colour /accentuate the backing track, rather than just strum along the way I usually do.
I even included a solo of sorts, which is terra incognita for me

My eyesight is getting worse, so I’m unable to sit farther back and still see the screen (for the lyrics that I haven’t learnt yet). That’s why you can’t see the guitar

I was recording on my webcam just to see what the whole mish-mash would sound like, but as it went smoother than expected, so I reckoned I’d share 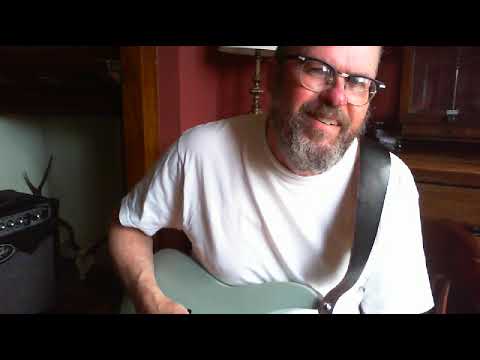 Saw the post and the comments but did not listen to the tracks, which was unknown to me. So a pleasant surprise to trip over this delightful ditty. No critiqie offered as I just sat back and enjoyed the moozic with a post tea coffee. Nice share Mr L.

Yes but you know what I mean.

Nice one Brian, giving Daphne an outing again, much better for the higher gain territory!
Didn’t listen to the words really, I prefer to read them these days - my bionics ain’t much cop anymore so I can’t be ar53d with them anymore

, maybe that explains my current ventures into the music I’m listening to!(almighty racket, her indoors calls it)

Well, from someone who told me recently they were not into lead guitar, that was a surprise! Bends too! Really good.
It will be no surprise to you however to learn that I don’t know the song.

I enjoyed it. I thought your Trio+ backing track was great. Was that a loop with the picked guitar? The high gain worked well and the dynamic harsh strums worked well.
Your vocal suited the song and as you say, very different from your normal stuff. ‘ Normal’. Is there such a thing in BL land?

Haha, keep your leering eyes off my blue baby, mister. I thank you kindly for introducing us, but it stops there

Yes, I’ve noticed the symphonic shred-fest fronted by powerful ladies… A niche I have yet to get to learn to appreciate properly

Ta for the listen and chat

It will be no surprise to you however to learn that I don’t know the song.

It’s not just the song- It’s the band that’s woefully under-appreciated. They’ve been going forever and have a ton of material. Alas, i feel such a fate awaits my genius as well

Regarding the ‘lead’ bit: I do really like some lead/solos, but so much of it often seems like ‘filler’.
That said, I am still amazed whenever I play a pattern over a progression and it ‘fits’-
Magic really

Yes the Trio was straightforward enough as it’s the same chord progression throughout the whole song. I’m still blown away how folk can write different melodies over the same progression.
I then put a simple clean arpeggio loop on top, which I sometimes followed ‘live’ or alternated with strums. I may come back to this in the future, as I’m sure it would sound a lot better with a bit more attention in a DAW.
‘Normal’? Hmm… I think I find myself constantly trying to dismantle people’s impression of what they think of me

Ta for the ongoing support!

I’m aware I often play ‘predictably’ and slum around my comfort zone, so decided to push the boat out on this one.

… and a mighty fine boat you’ve launched cap’n. May you sail the high seas in search of more adventures such as these.

Looking forward to the metamorphosis and it’s consequences Brian.

That was great Brian really wasn’t expecting to hear any lead, wow it’s a first I think I saw you doing that! Definitely get out of your comfy slippers more often, new pair of shiny shoes looked good on ya!

Sounded good musically, Very nice guitar playing all the way around. Nice melodic lead playing. You seemed to have some affinity for the source material’s lyrics and point of view. Well done, sir!

Hi Brian!
You chose an unknown (for me) song again with meaningful and multilevel lyrics. So I had to look for the text and read it, because I don’t understand everything by ear. But it was worth it!
Great job, my friend.
And although I can’t see your guitar, I can hear it perfectly

…applause…
And then… you play solo

, …But no camera on your guitar

and then you come up with such a story that your vision gets worse ,difficult to remember text bla bla

…if we couldn’t see it, maybe it won’t happen at all ey,…and your friend might be secretly playing behind you…

, i feel such a fate awaits my genius as well

Who in the world do you constantly think differently about you

… that ship has passed…

Looking forward to the metamorphosis…

Thanks for the vote of confidence, Ade

new pair of shiny shoes looked good on ya

I’m one of the few people I know who buys second hand shoes in charity shops. My friend calls them ‘dead men’s shoes’

@CT Cheers Clint. I’ll take musical from you as a high compliment indeed.
As a faithful church-going Roman Catholic, I did have some interesting internal debates as to when criticism of institutions you are part of becomes disloyal, but I reconcile it with telling myself it’s all about human follies. I’ll be first in line to start casting stones at myself

@roger_holland Not quite Blind Willie Johnson, but Blind Brian Larsen does have a certain je ne sais quoi

A bit embarrassing actually: I just came back from the opticians-
Turns out I’ve been wearing my old specs for the last year instead of the increased strength lenses that I was given (bottom of coke bottle-thickness).
Not that it makes much difference- they’ve got worse again and I’m being referred to the surgeons for cataract surgery.

I thought I was going to get old gracefully
… and later!

In the last millennium I used to use a translation site called Babel-fish for the belly-laugh-inducing surreal entertainment it provided.
Your comments sometimes make me feel nostalgic

Hey, I forgot the @crocodile1!
Always a pleasure to read your comments

Even for us mother-tongue-mothers, there’s a lot of unintelligible lyrics in this band’s work.
Sometimes that’s the secret of success

Cheers Clint. I’ll take musical from you as a high compliment indeed.

I appreciate that, and it was meant as a high compliment. Always a treat when your tracks pop up on my YT feed. You 'da man!

That is annoying, but a standard operation these days… let us know when you go.

@brianlarsen you ‘a monstrous vermin’ and then this …

I thought I was going to get old gracefully

Loved it, Brian, I imagined it and was not disappointed. And coming late to the party meant lots of extra laughs reading through the replies.

Twas on the good ship Larsen …

Another great performance Brian. Even a bit of whammy at the end!

@DavidP
Well, I blame you for this whole detour, Sir

@jkahn OMG, he stayed till the end!

Gotta say yes to the Jengel-stengel