This is it, the final song I learned for my grade 1 consolidation! I wanted to end with a song that had something that I didn’t practice/learn during grade 1 and this one had a pretty tricky rhythm. It has a 2 bar pattern so two patterns that you play back to back for the same chord then move on to the next is how I look at it. This was tricky at first but once I got the hang of it I really liked the sound and though it’s not perfect it was really fun to learn. Like my other videos this is just the chord progression for ~1 minute. Any feedback would be great! That sounded and looked good, Alexis.

I especially noticed the thumb sneaking into action to mute the low E when playing the Am. A great technique to develop early and ever so useful on an electric since things getting get a bit messy when you turn it up a bit, add some gain, and it the low E when not part of the chord.

One small thing to keep in mind, not a big deal. I noticed you ended the recording with a single G after the final C. In doing so you didn’t play the final G in the G Am C G pattern. Always good to end on the chord that is home, the tonal centre of the song, which in this case is G, so would suggest after the final G in the pattern just one more down strum on the G would sound more complete.

Enjoy grade 2 and I look forward to more recordings as you progress through the grade, now you’ve broken the ice consolidating Grade 1

Another consolidation piece, Alexis. Think you can be happy with that.

Kudos to you for giving yourself the target of these consolidation songs - playing and recording.
All show good progress and hopefully the various comments also help you make the improvements needed as you progress.
Now saddle up and ride along to the next town my friend!

Rhythm good and chord changes clean @alexisduprey. Not sure if you know, if you want to play along to the original recording with this chord progression you need a capo on fret 2.

It has a 2 bar pattern so two patterns that you play back to back for the same chord then move on to the next is how I look at it.

would be grateful if someone can confirm

@Stuartw Confirmation on its way!

I have been adding chapters to the videos starting with grade 1 song lessons which are now all done. See pic: 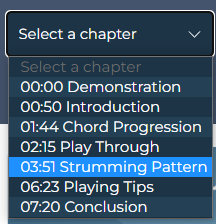 As Justin says, it is a good idea to write it down. The strumming pattern is a two bar sequence for each chord.

It is better to see those in full alignment:

That is correct.
Each chord gets two bars.

Yeah when I first read it in Justin’s song book I was confused too. I ended up listening to the original recording a couple of times and then playing it in the app. In the app in looks like one long measure, but is actually 2 smooshed together.

The way I practiced it was set the metronome app to 4/4 and play the strumming pattern which would take 2 cycle (8 clicks) to play once.

Technically it’s a 16th note strumming pattern over a single bar at a very slow tempo. So the song book is correct in that it’s a bar of each. Like Richard says though, you can treat it as two bars of each with an 8th note pattern. Especially for Grade 1.

I presented the information from a grade 1 song lesson perspective.

@Richard_close2u
Richard, I think it is fair to say that any 1/16 note pattern can be broken into 2 bars of the same chord into an 1/8 note pattern. And to retain the same tempo on a metronome you’d have to double the tempo of the metronome.

I puzzled over this for some while and conclude that one should probably listen to the drums to get a sense of the original groove. I think the kick and snare pattern would dictate what the actual tempo is and whether you are playing 1/16 or 1/8 note pattern

But if it helps to think of a 1/16 note pattern as 2x1/8 note patterns to be able to learn the pattern and it’s accents that is probably not going to do you any harm. I personally struggle to get the foot tapping with a down tap on the beat and then an udu before the next down tap. All practice, I know, but whatever hacks help get one into the groove?

That’s really nice and solid. I know because I just had a good old sing over it so it must be

one should probably listen to the drums to get a sense of the original groove. I think the kick and snare pattern would dictate what the actual tempo is and whether you are playing 1/16 or 1/8 note pattern

This drummer gives all we need to know the ‘actual’. 4 Non Blondes - What's Up - DRUM COVER - YouTube
Look and listen especially to the rim shots played on the snare … hitting the 2 and the 4.
Then listen to the guitar chords in the background.
Each lasts one bar of 1-2-3-4 so strictly speaking we should call it a 1/16th note pattern.
But, for ease, in the grade 1 lesson, Justin calls it as two bars playing 1/8th note patterns.

But, for ease, in the grade 1 lesson, Justin calls it as two bars playing 1/8th note patterns.

I still need that ‘ease’

It certainly made it much easier for me to grasp.

Solid, time to move on.

That sounded really good Alexis. I too had started Grade 2 a while back. Maybe we could be jam buddies someday

PS: I am not going to spoil the fun of self discovery, but very soon you’ll learn the 1e&a counting and 16 bit strumming pattern (part of Grade 2) and this will become super clear. Cheers

Another good one Alexis. It is a bit of a tricky one as it was one I did myself but you did an excellent job.