I must be missing something. Re the standard 12 bar blues progression - the fifth chord in E is B not D(?)

@Zedred
Hi Roger. You are correct. Looking at the lesson text you are playing in the keys E A and G. So the chords, played as 7th chords, would be:

Can you be specific where the reference to the D was?

Hi David
In the video when Justin is demonstrating the first 12 bar blues progression he plays E, A, D and says the names of the chords. You can see he’s playing the D7 chord 'cause I followed along as he played.
It sounds better with B, to me anyway.

@Zedred
When Justin demonstrates the first 12 bar blues progression he is playing in A
He plays A7 D7 and E7.
The chord are even on the screen when he’s playing, 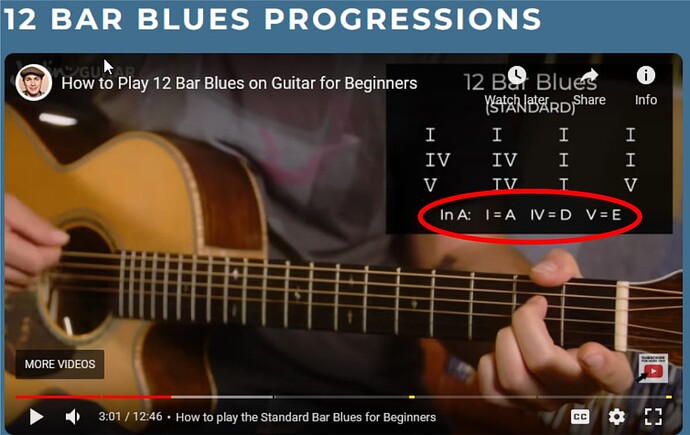 In the video when Justin is demonstrating the first 12 bar blues progression he plays E, A, D

When he introduces the Quick Change in the key of E, he definitely plays E7 A7 and B7.

Do the several clarifications above not answer and ease your confusion?

It may be due to the fact that E and A are both in the 12-bar in the keys of E and A. But their function in each is very different.

Sorry Richard, my confusion was with the question above by Zedred claiming that the first progression was in the key of E when it is in A, so wasn’t sure where he thought the B chord came into it.

Everyone gave him sound advice and no I don’t have a problem understanding The Blues at this beginner level, but thanks for the feedback.