There are many examples in blues, rock and country of players switching between the minor and major tonalities yet still keeping it simple and pentatonic. A classic rock example would be Angus Young mixing his scales in many AC/DC solos.

If you have spent some good time getting to grips with the minor and major pentatonic scales separately and are wondering how you could combine them, this might be something that floats your boat.

To begin, group the position shapes together. 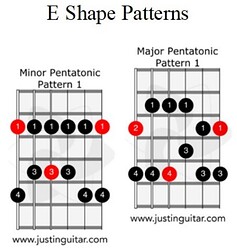 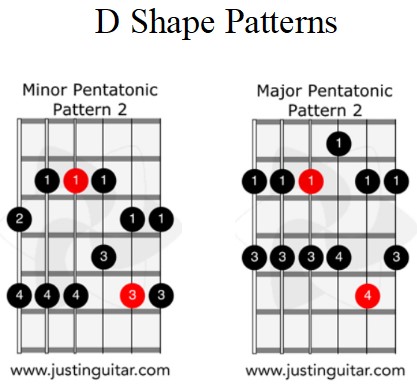 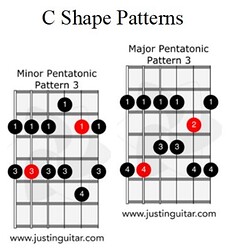 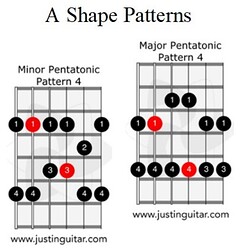 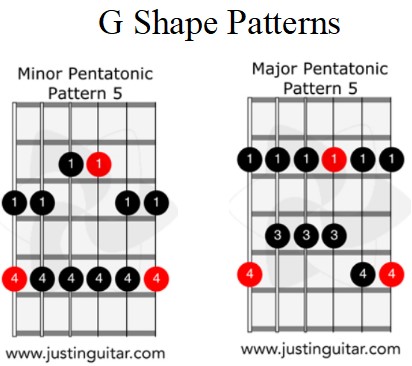 This is where the ‘slide 3 frets down’ concept fits. The matching shapes are displaced by one pattern, offset pattern numbers having the same shapes on the fretboard.

This is the process. We will see a full demonstration in the key of G below.

For a chosen key, find the lowest complete pattern available in both minor and major pentatonic scales.

Play the minor pentatonic scale ascending to the highest note of that position.

Play the major pentatonic scale descending to the lowest note of that position.

Start to cycle this pattern around so you are playing all of the notes ascending and descending.

Remember to listen for the root notes.

Remember to start and finish on the root notes.

Once comfortable and you have developed some muscle memory, begin to extend the routines and use the scale practice ideas Justin teaches in his lessons: 3-in-a-line; 4-in-a-line; random direction change; string skipping.

If you can, record a loop of just the major root chord to play this over.

Then, play over a simple backing track with a major 12-bar blues.

Beyond that see what you can do over a diatonic major scale chord progression.

Keep listening for the root note.

And keep listening for the different ‘sound flavours’ that the minor and major pentatonic scales give.

The next step is to switch the practice around.

Practice in the same way as above.

The lowest available complete patterns for the minor and major pentatonic scales are Pattern 5 (G-Shape).

Once comfortable and your fingers can walk the walk, start asking them to talk the talk and play over some backing tracks.

Play freely and at will over this G Major chord drone: G Major - One Chord Drone - Electronic Strings - YouTube

In these two blues tracks, play either scale over the I7 and the V7 chords, play only the G minor pentatonic over the IV7 chord. (See Justin’s lesson mentioned above as to the why).

Next, switch around to practice then play - in the same way as above, including over backing tracks - the major pentatonic ascending and the minor pentatonic descending.

Moving further up the neck to the next patterns we have:

Learn by practicing then playing with these patterns, then look to combine them with the previous ones. Try to make the learning steady, deliberate and cumulative. Until you have a good familiarity and can use one set of scale patterns to make music and get things sounding good, hold your forward push to learn more.

Continuing up the neck:

And up some more:

Relentlessly up we move:

Until the patterns come back around again, one octave higher than our starting position:

We are not quite done and can push up a little more:

Most guitar necks have at least 21 frets so let’s go for one last push:

Given that the hard work of mapping the patterns has been done, it makes sense to learn and practice for some time in the key of G, using the G minor and G major pentatonic scales. There are eight positions spanning from open position all the way to fret 20. Learning each set in its own right, then combining a new one with previous previous sets will take some time. Gaining fluency and learning to combine and make music across chord changes within a progression is not going to happen in just a few days or weeks. Give it the time it warrants and enjoy each step.
Beyond this, once you have become proficient with these sets of patterns in the key of G, you should look to incorporate practice routines that take you out of the ‘boxes’ and play the scales laterally along the neck, aiming for fluency and smooth transitioning to any position at will.
Plus, of course, you will want to begin transpose these routines to learn the skill in other keys.
Have fun.

@Richard_close2u Thanks Richard, there’s lots to get stuck into here. The main problem I have is trying to get any noodling/improv over scales to sound musical. However much I work on mixing up the scale it just doesn’t sound very good, one of the reasons why I tend to just stick with practicing and playing chords and songs with just strumming. I guess it comes with practice. Cheers, Mike

Fabulous job, Richard … light years ahead of where I am at present. Something to look forward to further on down my lead play road.

@Bassmiket … thanks for checking this out.
Mike, have you spent a good amount of time taking your time in Justin’s lessons on the Blues Language? The Blues Language | JustinGuitar.com The main emphasis in the early days of learning to make pleasing sounding improvisation is to build up from a vocabulary of licks. I have another topic I need to migrate from the old forum which might help you in your struggle.

Thanks @DavidP … all in good time, the learning isn’t going anywhere, it’ll just be there waiting for when the time may be right.

Thanks @Richard_close2u for the link, I’ll make that my starting point for tomorrow’s practice.