I have been a Jimmy Buffet fan for a long time and feel his ballads are often overlooked in favor of his party songs. A Jimmy Buffet song also seemed appropriate for a debut of my 2nd guitar build. I decided to call it my ‘Tropical Island’ guitar because of the inlay.

That was good Mark. Never heard the song before so you not only introduced me to your latest build but also to Jimmy Buffet. Out of interest are you selling the guitars that you build?

Thanks James. That is the end goal, since I only have room for so many and I find that I really enjoy building them. I also have to justify buying the tools.

These were built from Stew-Mac kits, but I am gearing up to start building the rest of them more from scratch.

That was really nice and smooth. Never the song before but like it very much.

Thanks Sandy, he is a pretty prolific writer.

Hi Mark,
That sounded good…like a sweet song in the background a bit…delicious

That was a nice song and very well played and sung. Guitar looks and sounds sweet.

I’ve heard of Jimmy Buffet, is he the, 5 o’clock somewhere, guy?

Thanks! Yes, he is mentioned in the song and joined Alan Jackson on his recording of it. Jimmy is best known for Margaritaville. One of his earliest hits was ‘Come Monday’.

Hi Mark, don’t know the song or the artist by name but you and your guitar sounded good.

Mark that was a great cover well done! Really nice mood around it and you made it super comfy to listen to

wow I love the graphic on your neck on my phone it’s hard to tell but is it a mountain, a beach and the moon?

Thanks Adrian, yes it is meant to be a Tropical Island. On my first guitar I put the palm tree in the 12 fret. On the second I decided to give it a backdrop. I used the same wood (well 2 out of 3) for the inlay as I did the custom rosette. The beach is quilted maple, the mountain is walnut, and the hill between them is cherry. Here is a closeup I took that might make it easier to see. It is hard to see behind the fifth string, but there is also a small star to the left. 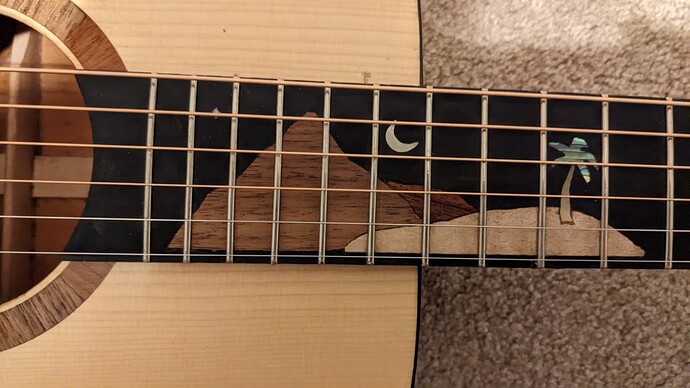 Wow that is truly wonderful Mark, you should definitely try to sell those I think there would be a lot of interested parties in those

Thanks Adrian, by next year I hope to start. I will have to find a way to pay for my new habit, and Jen will start to have an issue when the house is filled up with guitars.

Hey,
This came out pretty good. LIked your vox, guitar and vibe you put out. Good job all around!

Keep on with the good stuff!
LB

Nice chilled vibe there, I enjoyed that

That was nice!!! Great job! Wait you build your own guitars?!? Thats insane man!!! That guitar looks so nice!