AVOYP consolidation from the old site

Since I don’t have nearly as many recordings as you more seasoned, accomplished and long term members, I decided to grab all of my VYOP from the old site and consolidate them in a single post. Without further adieu, here are the few recordings I was brave enough to post up.

Audio or Video of You Playing AVOYP / For What it’s Worth by Buffalo Springfield, with harmonics

OK, so after posting up a few videos in my road case (now learning log), at DavidP’s prompting, i’m going to post one up here. My story is in my road case Frito’s Learning Log. long story short, after 36 since I got my 12 string Sigma, i am determined to truly learn guitar this go around. This is a video I did tonight of For What It’s Worth by Buffalo Springfield. As you all probably know, the core piece is pretty easy and straight forward, E → A verses and E->D->A->A7 chorus. Me being me, and following in NITSUJ’s footsteps of challenging himself, I decided I wanted to try to mix in the harmonics with chords. So here is one of the five songs I’m learning to play by memory to “pass” grade 1 of the new beginner’s course. I think this next one is my favorite of any I posted:

Audio or Video of You Playing AVOYP / Angel From Montgomery

Hey all, it’s been way too long since I’ve been on here. The year has gotten away from me by working 12 - 16 hour days. Thankfully my Spotify feed inspired me to attempt a couple songs. Most recently I’ve been learning Angel From Montgomery. I chose the Tedeschi Trucks Band tab because it seems better suited to my vocal range. The tab mentions a flute bit. Since I don’t own a flute and I still don’t know how to play my harmonica, I chose to whistle through it. I think I needed another beer as my lips were a bit dry for the whistling.

Anyway, here’s my go at it. Not that great but at least it’s not being lazy on the couch. OK, so I guess this one is kind of special to me also: 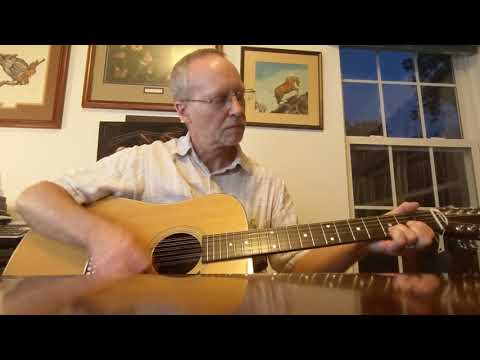 While I haven’t been practicing scales, F chord, changes etc. like I should be, I have been religiously practicing a few songs. For the past couple months I practice “Wish You Were Here” at least once a day and for the life of me I still can’t get all the way through it as well as I would like. I always make some mistakes but in different places throughout the song. It would almost be easier if the mistakes were always at the same place. At least then I would have an area of focus.

Anyway, after about a dozen recordings over the past week I decided to suck it up and post one. Here’s a go at it from today. And just like that, after CT made the following observation:

That was good and very well received! Over 3.4k views and 182 likes in four days. Hats off for discovering the secret sauce to building a youtube presence. 1.34k subscribers! You’re doing it right. Please share your backstory.

I haven’t posted a single thing.

Time to get off my rocker and post something up so I don’t let down my YouTube fans.

Oh yeah, I remember those. Well done! Get your new year plans together for lessons and songs to cover. Looking forward to hearing more music.

Hey, Frito. Thanks for posting this over here in the new universe. I enjoyed revisiting this. Looking forward to your update.

Thanks guys. I have one that’s close. I haven’t played it for a while so hopefully it comes back to me. If I can get it to a point I’m pseudo happy, I’ll post it up next week.

Good memories, Joe, thanks for sharing.

Just be happy. However you play it now you know you’ll likely play it better for next Christmas. And however well you play a song, I am pretty certain you’ll always identify that which could be played better. Don’t let that rob you of the joy of just being able to play it now.

I was watching a Tommy Emmanuel video, perhaps the Rick Beato interview, and he made the point that sometimes he comes off stage and isn’t happy with his performance … one of the world’s best, who plays they way he does, and he’s not happy.

Look forward to the song when you are ready.

And however well you play a song, I am pretty certain you’ll always identify that which could be played better. Don’t let that rob you of the joy of just being able to play it now.

Truer words have never been spoken. The harshest critic for any musician is almost always that musician. (Although in my case my wife vies for that distinction…

Hey Joe. Haha always wanted to say that to someone! Some good stuff there. I look forward to more from you in the new year ahead.

Hey Joe. Haha always wanted to say that to someone!

LOL. Funny story about that. One of our auditors is named Joe. I was replying to him via email and started off with “Hey Joe” and followed it with "now I have Jimmi Hendrix on the mind. Now, he’s in his 20’s and had never heard of Hendrix. He Googled the song and thanked me for introducing him to some great music.

It is the responsibility of every parent and grand parent to corrupt their children and their children’s children with the music of their yoof. Someone somewhere missed a meeting.

Hey Joe, where were you going again ? Well it turned out, a lovely trip down memory lane. Thanks for bringing those across, some good work in those recordings.

It is the responsibility of every parent and grand parent to corrupt their children and their children’s children with the music of their yoof. Someone somewhere missed a meeting.

I feel I did my part for society since his parents clearly didn’t.