For each chord in the progression, I am going to add its constituent notes under the chords where a melody note is shown.

So, you will see three rows. 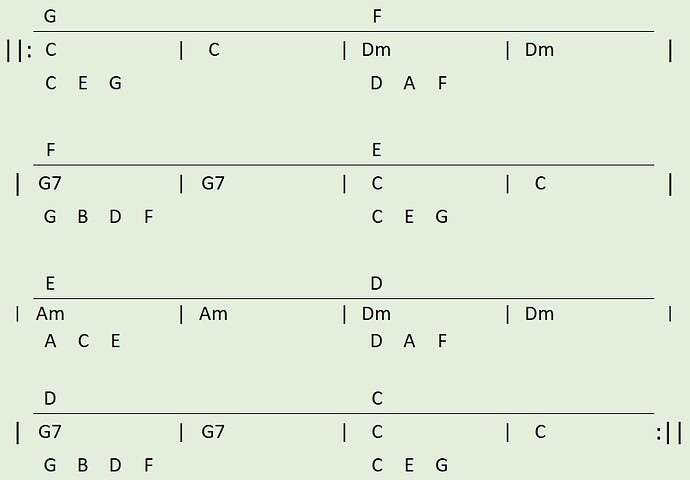 I am hoping that there is now something so clear and obvious that you see it in an instant.
If not, I am going to put in a real give-away hint using bold and coloured font.

This is the same diagram as immediately above with certain notes emboldened and depicted in dark red. 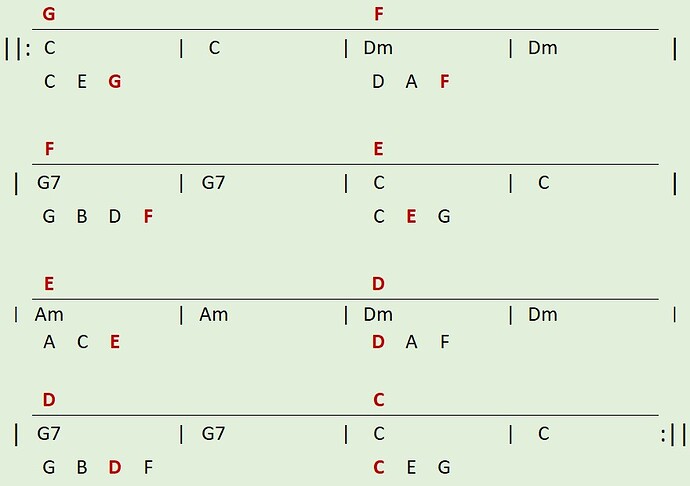 Now, let’s return to some questions previously asked, and add some more.

For each of the four groups of nine notes (remember, I have deleted all but the first and last in the diagrams above):

Put the answers together - do you find any significant overlap?

Put the answers together - do you find any significant overlap?

For each of the four groups of nine notes, the first and the last note is ALWAYS a note in the underlying chord.

This is an element of genius of Chet’s lesson.

Without mentioning it, without adding in confusing segments of theory, and with seemingly no effort whatever, he has devised a masterpiece of guitar tuition.

A chord progression in the key of C. An easily played set of notes that make up the C Major scale. A descending set of notes from that scale that are no more than a simple linear sequence to play over the chords. And hey presto - music, sweet and melodic music.

What he undoubtedly knows, and isn’t making a fuss about, is that he is performing that ‘magic trick’ of targeting chord tones when playing his ‘scale tune’.

It’s just so, so simple.

I tip my hat to Chet in this.

Youtube and the interweb are full of videos by guitar gurus promising you 100% satisfaction in your guitar playing if you just target chord tones when you’re playing a solo. Some are awful, some okay and some are good. I suggest that none does it so simply as Chet does here.

And to you my friend for reproducing this gem of a tutorial from the archives of the The Forum.

Thanks David. I know you kept a copy in pdf format from its previous incarnation. I am rewriting and updating some of the content and graphics.

I am rewriting and updating some of the content and graphics.

And doing a fine job of it too, Richard. I noticed when I read through it again. The new platform delivers a much better final look, I think.

Good to see this surfacing again. Bookmarked for later reference, as I have more irons in the fire than wood at the moment !

Hi Richard
The Chet Atkins lesson is very good and you give a very good explanation of how and why it works and sounds good.
Very useful, thanks.
🎸David