Basic steps in major scale improvisation, targeting chord tones and more, using a Chet Atkins beginner lesson.
This topic was originally created in response to a thread in the old forum by @batwoman using this video as inspiration: In the video, Chet demonstrates where to find and play the notes of the C Major scale (no sharps or flats) starting with a G note on the 1st string at fret 3 dropping all the way down to the root note C at fret 3 of the A string.

Of course, he could have continued and played descending notes B and A on the 5th string then G, F and E on the 6th string. That would have showed all C Major scale notes available on the open strings and the first three frets. The way he shows he does not start on the root note but does end on it, but hey ho.

These notes all fit around an open C chord shape. Does that mean it is equivalent to the ‘C’ shape from the CAGED system of chord shapes and scale patterns?

CAGED is an easy name to speak out loud but EDCAG is the order Justin and others most usually teach. The five letters derive from the open chord shapes of those letters … E chord, D chord, C chord, A chord, G chord. So that means the C chord and the Major scale shape around it is Major scale pattern 3.
See the diagram in this lesson: The Major Scale: Pattern 3 | JustinGuitar.com
The diagram has a line of tabbed notes with number 1 (notes normally played with the first finger) which you have to replace with open string notes (notes formed by the nut). And if you haven’t seen it before look carefully to see the C chord shape sitting within that diagram.

Knowing the notes up to fret 3 is a good thing. And playing around with the notes from the C Major scale in this easy, accessible way is, in my view, an enjoyable way of learning to play simple melodic passages over a chord progression in the key of C. The way Chet plays and uses it is charming. And it ties in beautifully with Justin’s Module 9 lesson and the Major Scale Improvisation lesson Justin teaches in Grade 2 Module 10 here: Major Scale Improvisation | JustinGuitar.com

Let us delve deep, then deeper, to see what goodness we can extract from this one video of Chet Atkins and his simple C major scale melody. As we do so, we will find and illuminate ways of using a given melodic pattern and venturing away from it in some early steps of improvisational play.

The chord progression that Chet uses for the ‘scale tune’ (starting at 1min 35secs) is at a nice slow 4/4 tempo. 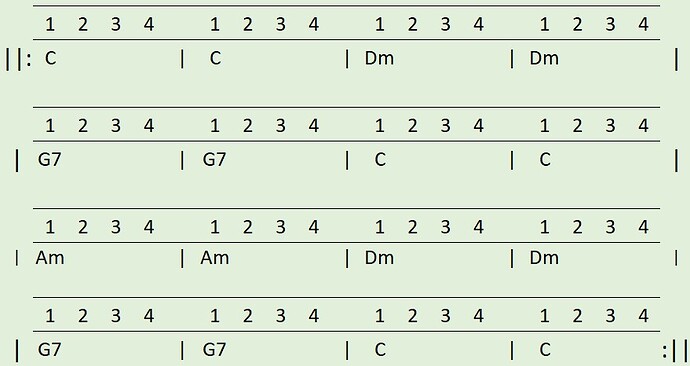 To gain full benefit from this topic I recommend you play and record a loop of this progression.

Plus, naturally, I have created and provide an mp3 of for you to use freely. Well, it wouldn’t be the same if I didn’t would it?

Here is the C Major scale to an octave repeat.

The chords in the progression are all made from notes in the C Major scale:

If you do not already know about simple chord construction then look carefully at each group of notes within the chords, then find those same notes as laid out in the line of notes in the C Major scale.

There should be something you notice … a pattern, a sequence, a common feature that they share.

Are you still struggling to see it?

These regular intervals taken from the scale are called ‘stacked 3rds’ because the chords are made up from a simple pattern thus:

For each given start note …

Stacked 3rds.
All built on notes taken from the same scale.

Does this make sense?

I want to add in a little more on the chord progression in C that Chet uses for a moment.

The progression, listed using the Roman numeral convention where upper case is a major chord and lower case is a minor chord, reads:

Or, if you split it equally you can view it as two successive progressions:

There are advantages to viewing it as a progression in two halves. Both sections are identical apart from the starting chord. Both sections conclude with a G7 chord moving to a C chord (a V7 to a I movement).

Small aside.
Do you hear how this ending of G7 to C just sounds right, complete, at peace with itself? This specific movement from V7 chord to I chord is called a closed cadence or authentic cadence. I’m not going to spend time on that theory just now, I only mention it to encourage you to listen to how wonderful that resolution sounds, how the progression just seems, sonically, to pull you in to a happy place as it moves from G7 to C.

By now you should have that progression nicely in mind, in your ears and under your fingers. Hopefully you have recorded a loop to play over.

If you have not, here is the mp3 version again. Feel free to use this as you wish.

Let’s move forward and anticipate the ‘scale tune’ by laying out the chord progression again, this time with the constituent notes of each chord written above. 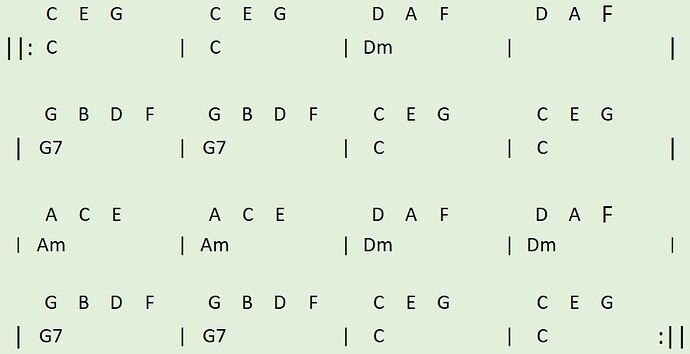 The idea in setting the progression out this way is to connect the chords with their constituent notes - which as described above all derive from the C Major scale. Do not get too hung up on the notes above each chord as separate notes, but view them as small groups that work well together as chords.

Does that make sense?

In subsequent posts, it will be important to try to think of single notes rather than as groups making up chords. Single notes that sit within any of these chords when they appear in the progression and single notes that are being played as part of the ‘scale tune’ that Chet and the student plays in the video. 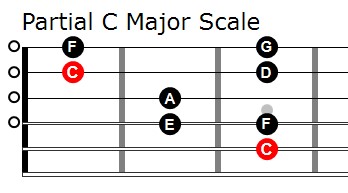 Hopefully you know your note names on all strings to at least fret 3 so should realise that Chet (deliberately one must assume) omitted a few notes (those that are lower than the Root C note on the 5th string)
For completion here is the full set of notes in the C Major scale up to and including fret 3: 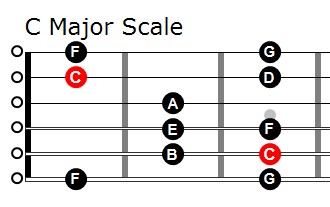 For the first, simplest version of the scale tune, which Chet starts and then encourages his student to also play, he plays descending sequences comprising four groups of nine notes over the chord progression. It starts at the highest note that he has shown, the note G at the 3rd fret of the high e string. It goes like this:

A simple stepped sequence of notes whose iterations always begin and end a note lower than the previous one.
So far so good.

And so mechanical, so mathematical one might say.
So how come it sounds sweet and musical?

To begin to understand the where and whyfore of this , let’s look at those same four groups of nine notes alongside the chord progression.

First, look at the ‘scale tune’ notes alongside the chords and the 1, 2, 3, 4 count for each bar. Every note is played as a quarter note on the count of a beat. 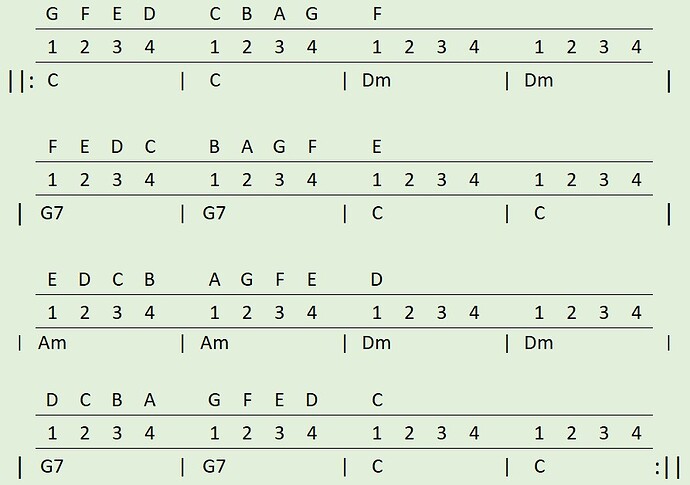 Of course, all of the notes sound just fine, because all of the notes and all of the chords come from the same place - the C Major scale.
So, instead of having four groups of nine notes (=36 notes) to perhaps confuse us, let’s just focus on two at a time.

Look at the first sequence of nine notes.

Look at the second sequence of nine notes.

Look at the third sequence of nine notes.

Look at the fourth sequence of nine notes.

I hope you can answer these questions and are beginning to see connections between the underlying chords and the eight notes being examined.

If you are finding the last section of part 4 difficult, not making connections between chords in the progression and notes in the melody, not seeing significant overlaps, then worry not, help is arriving.

Ideally you should have been reading the posts with guitar in hand, playing the chords, playing the melody over the chords, cross-referencing one to the other.
Maybe you have also been writing things down on paper to help with your thinking.

If you want to obtain the maximum learning and insight, and don’t yet understand everything, then try interacting with the practical aspects of these posts before reading further.

Supporting material to help with the content of part 4.

Here is the ‘scale tune’ and the chord progression lined up once again - this time with the numbers of the count removed for easier reading. 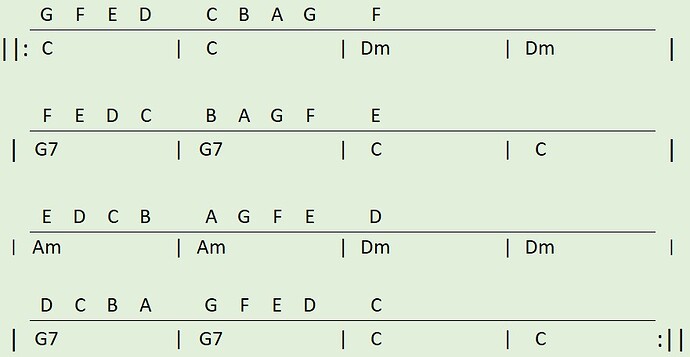 I suggested that the focus be only on the first and last notes from each of the four groups of nine notes. So I am now going to temporarily delete all other notes. 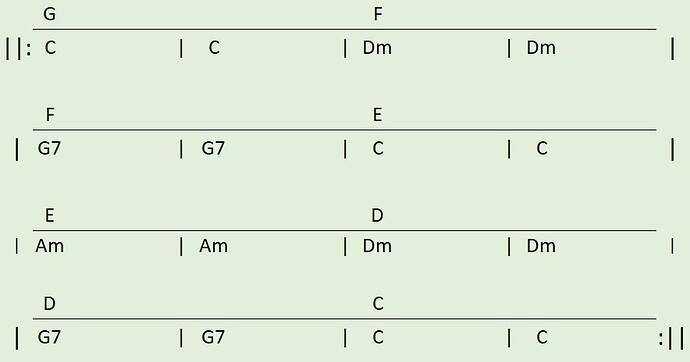 If yes, then this next step should be straightforward.