Beginners: What Apps Have You Found Useful? What Would Be Your Dream App?

Greetings, fellow beginners (and all others!).

Have any of you discovered any apps that you’ve found particularly useful/motivating thus far toward learning to play the guitar? What would your dream app do?

I have kept in mind the warning to not get too wrapped up in apps and instead to focus on the guitar. That said, I have found a few apps that indeed focus my attention on the guitar, which has been great.

I have Justin’s app and am enjoying it: Practicing chord changes to backing tracks and designing and using a practice routine have been GREAT.

Before I discovered Justin’s app, I had found the following apps (I have an ANDROID phone): Fretboard Quiz, Harmony City, and Guitar Chord Trainer.

Fretboard Quiz
Fretboard Quiz tests you on your learning of fretboard notes via PLAYING THEM on your guitar. It prompts you for a note and listens out for you to play it. You can control which string(s) you want to learn, which notes, which part of the fretboard, etc.

Harmony City
Harmony City listens to you play chords while backing tracks play in the background. It assesses each chord you strum. It’s an educational app for kids. I got it before I discovered Justin’s app with the backing tracks.

Here’s a screen captured video from my phone as I strum to “Zombie” (I couldn’t get the sound to record):
https://youtu.be/cs5-KO6fumM Harmony City has been FUN to use, and my chord changes have DEFINITELY improved via practicing with the app. My only issue with this app is that I’ve found it somewhat easy to TRICK the app. For example, if a chord calls for all 6 strings to be played, sometimes playing just a few of the strings will satisfy the app. I have found that to be true of almost all apps that claim to detect and assess chords. I think it just might be an issue with where the technological state of chord detection is. I’m not sure.

I reallllllly, really like the concept of this app . . . but it runs into the same issue as the Harmony City app: It’s not hard to trick the app.

My Dream App at This Stage Would . . .
I’m a complete beginner, so I’m working on such things as:

Given the above, my dream app would have the capacity to listen to me strum a chord and then give me feedback about how well I played the chord. (Technologically, that’s a BIG ASK, I know. LOL. As it is, I will continue to rely on my own ear. Not a bad thing.) This app would also allow me to select chords between/among which to transition, and it would count my transitions. It would record how I’m doing so that I could see my progress over time.

Well, thanks for reading! It’s been good to join this community, where I can discuss the guitar journey with fellow travelers.

I hope this post finds you well. I look forward to hearing about any apps anyone else has found particularly helpful or motivating.

For iOS, but may also be available for Android and desktop…

Justin’s app is the best I’ve seen - by far! The combination of a solid video course, timed practice routines, and a deep catalog of curated songs calibrated for your current skill level that you can slow down and play along with is an unbeatable combination.

The only thing I would really like to see added to Justin’s app would be a looping feature.

For metronome and drum backing…

GarageBand is full featured DAW, has lots of different drum options, and is free on iOS and iPadOS. But for me, it was too complex…I just want to quickly find a beat for practice or jamming. These apps are not free, but worth the money, IMO. For playing songs, I like Drumbeats+. User interface is kind of clunky, but you can save your favourites under a song name at the correct BPM. (Note they try to sell you a monthly subscription when you install it…you don’t need this…it comes with lots …

For slowing down, transcribing, and looping songs that aren’t in the Justin app, Anytune Pro. 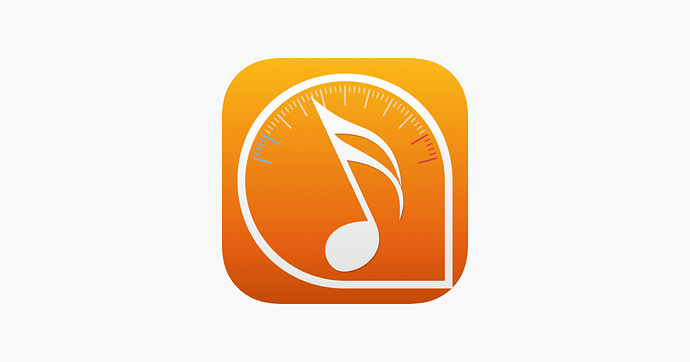 ‎Slow down music, choose the perfect pitch, and learn to play by ear! ANYTUNE™ is the ultimate music practice app for singers, dancers and musicians of all kinds. Use Anytune to learn to play, transcribe and practice songs by slowing down the tempo,...

Agreed: Justin’s app is incredibly beneficial. I am so pleasantly surprised and happy about the practice routine component. It’s so customizable. It’s just so THOUGHTFUL of Justin and the team. Each day I use it I’m impressed all over again.

I’m not using the Justin App. however i’m using the following apps to help me play along with songs:

Songster for Android: i took the ‘pay once for a liftime’ opportunity. Its a great app with a big song library . The only thing missing is a metronome function that is only available on the website plan, that is 9.99 $ / month.

Ultimate Guitar: Very huge library and many variants of the same song and active community. Not expensive, but the app just sucks donkey balls… they just build a wrapper around the website and called it a day. Does not scale good on a tablet and drains the battery very hard.

On the plus side, it has no segmentation, pay once a year and you have the same feature set on webformat and on mobile.

GuitarTuna for the easy metronome function and to tune the guitar when in need of a tuner that you forgot at home.

: My previous teacher loves that software, but i just hate it… On desktop its pretty okayish, but on mobile its a disaster…

GuitarPro: You can download the tabs on the Ultimate Guitar site and load them in the GuitarPro software, that does work nicely on tablets!

For training remembering where the notes are:

Fretboard notes game that helps you memorize fret note names quick and easy. In about 2 weeks you’ll be able to get any fretboard note on the fly

It’s not really an app, but the free songsterr version is very good, if compared to ultimate-guitar free version.

What I would say from my years of using different non digital products before Justin
ie in the days of VHS, Beta and Books and no web
The more sources you try to learn from as a beginner the less progress you will make.
You’ll bounce from rabbit hole to rabbit hole and before you know it, that axe and any other gear will get punted on Ebay, as you seek another of life’s distractions.

All that stopped when I found Justin’s website. Don’t care what you use but if you spend all your time bouncing from product to product, app to app, you’ll crash and burn very quickly.

You need consistency, continuity and a solidly laid path. And that is all here. Simples.

Old git, don’t do apps but done ok with Justin, refer to my Roadcase aka Learning log.

My 2 cents but heck after 17 wasted years, what do I know.

Justinguitar Community is the best one out there

Other than that I use Justin’s note trainer, UG app and Soundcorset metronome and tuner. And I am good as gold with only those for now

Goodness, I don’t even use the lessons any more

(and do a bit of chatting in the Social section)

(This will all change of course, when I get my act together

We talking about apps or in general? Sorry to say but Justin app is not something I feel is useful for me, lessons over the website are a completely different thing and of course I use those!

Even though not recently and similar to Brian I will definitely go back to those at some point. Lately I was more focused on translations via Amara and one thing that’s really good about it is a reason for me to watch lesson by lesson of the new course as I was learning on old beginner and intermediate courses. In Grade 1 there isn’t much I haven’t known but I really look forward to doing G2 and further grades. I think I have like 6 or 9 videos left to do

Thanks for sharing. And thanks for the details.

I’d heard of GuitarTuna but not the others. I’ll check them out!

Thanks for the reply.

Godspeed on your journey!

Everyone, thanks so much for sharing your thoughts. It’s nice and helpful to learn from others.

I’m new to this forum, and I’m not quite sure how to reply to all the responses. I just got a note from the forum to consolidate my responses if possible, and I’m not sure how to do that. So I’ll just say thanks again, and Godspeed on your guitar journeys!

I don’t use a lot of apps. I started with the JustinGuitar app and outgrew it.

My ones are:
Fender Tune (includes metronome and drum tracks as well)
Justin’s One Minute Changes
Ultimate Guitar (for tabs)
And voice memos, for occasional recording

On PC I used to use Rocksmith but found it not very good for actual learning.

Free, though you need to create an account to use some of the features.

My dream app would be a JustinGuitar song play-along type of game, but that works beyond beginner level grade 1 and grade 2.

The fact that the module songs are directly linked to the course is awesome. It’s a much better learning tool than Rocksmith. However, we can’t use it anymore to pratice grade 3 and above which is sad.