Bought an acoustic guitar and I think I found the most electric feeling strings!

They’re the NB1047 nickel bronze from D’addario (10 gauge)… after trying multiple strings, these come the closest to an electric in my experience. They’re still much stiffer like an acoustic set tends to be but much more comfortable. They sound the same as the traditional phosphor bronze, at least to my beginner ears…and my hammer-ons are much more pronounced now :).

By the way, I also think I may have bought a Monday/Friday guitar

Referring to this video of course I Saved ALL My Money to Buy The Coolest Guitar - Here's What I Learned - YouTube. It’s a PRS AX20E. There are a few finish issues (the most in obvious of them pictured below; just how common are such issues in the grain on tops btw?? It’s perfectly plain and smooth.) which attempt to ruin an otherwise excellent playing guitar. Still, I love the thing and I think will really help in my consolidation work as well as with certain pieces which sound the best on acoustic rather than a clean electric. 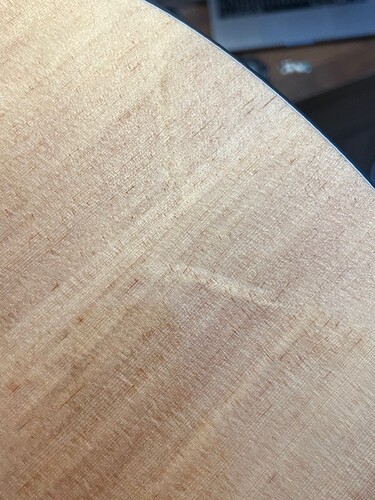 Hoping the post is useful to the folks in the same boat who just couldn’t easily transition to an acoustic guitar. 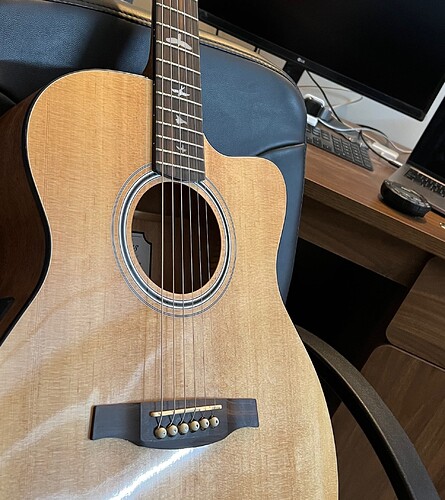 There are a few finish issues (the most in obvious of them pictured below; just how common are such issues in the grain on tops btw??

That is called Bear Claw it’s a natural growth mark in some trees. Some find it desirable some hate it.

This is what Google has to say
What is Bear Claw Sitka Spruce?

Bearclaw Siika spruce has a shallow, cross-grain curl that seems to increase cross-grain stiffness in acoustic guitars. Many luthiers feel that it enhances the tone and sustain of spruce. Strong, focused tone with strong fundamental — perfect for flatpicking styles

Whoa… well TIL ! Thank you!
Initially I did not mind it but then I can’t seem to ignore it. Anyways this at least allays my fears that it might be a repair job of some kind.

Saw the various images and the marks are mostly all over the top. Mine has just the two at an angle but anyways I don’t mind them so much.

Did you try the Silk and Steels?

It’s been years since I played an electric, but these had a similar feel, IIRC.

Well actually I have them at hand just didn’t change the nickel bronze out after switching to them. Will try them out once these give out maybe or a couple months. Thanks for the recommendation!