and it’s only half past eight

This is going to be a very strange conference, so, french english dutch…(.aussies.)…where are the germans?

…where are the germans?

They’re on the sunloungers. They put their towels on them last night!

Ooo…those jokes are the same everywhere too

, so there might be some truth to them…since last week or so we (the Netherlands) have “don`t mention the war” from Falwty Towers(really hilarious), an official appointment in the dutch language…that’s what I have to think about all the time with Germans again…that’s not bad for the Germans, just for Basil.
Now back to ukelele

Four years ago my son, Tor, attended his first ‘house music’ event in secondary school. The next day he asked if he could learn how to play the guitar. He thought the house ‘rock band’ section was really cool. (It was).
Last night their band came first in their category with a proud daddy watching in the audience. (He’s playing bass)
I wonder if there were any year 7s in the audience, now pestering their parents for a guitar, because they want to be as cool as Tor?
On a side note, this kind of marks my 4-year guitar anniversary, as I agreed, on the condition that I could sit in quietly on his lessons and practice by myself when he’s in school. (That came to an abrupt end when my good friend Chris directed me to Mr. Sandercoe’s site.)
The rest is history. 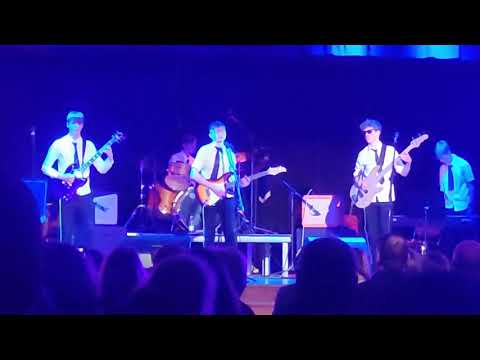 You should be very proud Mr L.

Very and a very proud moment! I can see he takes after his old dad looking in cool in shades

Time for a duo I think! They’re certainly well rehearshed

Very cool Brian! They were awesome! What a proud moment for you mate. The first of many I would say after that performance. Tor obviously got his rhythm chops from his father.

Hi and good morning Brian,
You must be so proud to see your son on stage like now

…the bass player of the band, do you also remember exactly where you failed as a father when he came out that he liked bass more than regular guitars?..

What a moment.
And yes, inspirational for the younger ones in the audience one would hope.

What a fantastic rendition of a a personal favourite from my high school years.

And no doubt the coolest dude in the band is the base player (not taking after Bill Wyman in terms of stage performance).

What a wonderful moment to celebrate, Brian. Thanks for sharing!

And congrats on that 4 year JGversary!

and inspirational to the learners on this forum too

Wow there is still some hope of youngsters listening (AND PLAYING

) to some classic rock and not all this new mainstream stuff! What a great moment to a proud pops, Brian when are you planning to get your son to play with you at Community OM?

Great stuff!!! You have every reason too be proud min venn

When are you two linking up on the OM?? He running fat bass lines and you rockin out on the Hagstrøm??

Those kids sure do

Your young ‘un is lucky to go to a School where music is encouraged, it’s not always that way.

All in all a very interesting read, yours always are

Very cool, reminds me of a talent contest at school, watching a friends brother in a rock band they did a song called I love heavy metal, which was a direct copy of Joan Jett’s I love rock and roll. Back in those days it was harder to discover music, so nobody new it was a cover. That started my desire to play, only know 40 years later being realized.

You should be very proud Brian.

Great stuff and at least he is at a school that encourages music. Looking forward to the family band performance in an OM.

Oh and what a proud dad you should be, Brian! I bet the audience enjoyed that! I did!