My new guitar is less than a month old, yet I’ve already managed to ruin part of the finish. I hadn’t noticed it was even happening until today, and am feeling pretty annoyed about it to be honest. (At myself, not Yamaha.) 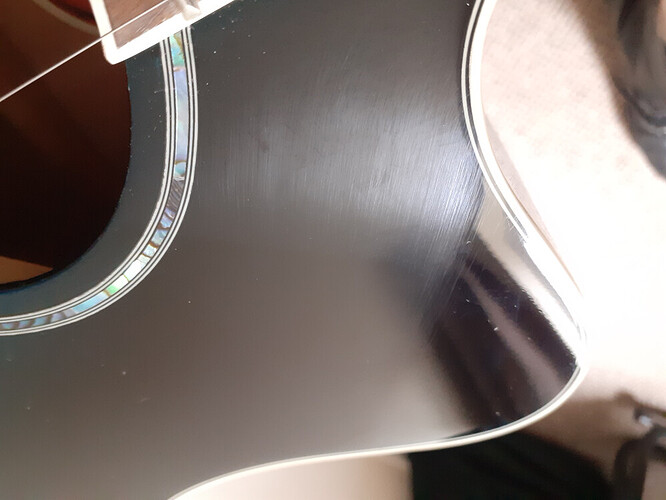 This is caused by my fingernails. I always play acoustic with thumb strumming, open handed, fingers relaxed. Of course I’ve noticed my nails tapping against the body sometimes, but my other acoustic is light coloured wood. On that guitar this “scratching” isn’t visible at all unless you really look for it, hence why I’ve never noticed. The dark finish of my new guitar means it pretty blatant. Obviously I’m going to look at changing my strumming, but the damage is already done.

So I’m wondering if anyone here has any experience of buffing/polishing guitar lacquer? How did you do it, and what products did you use?

Please don’t link to guides. I can Google easily enough for myself, and already have. However, I’d rather take the advice of a Justin Guitar member who loves their guitar, rather than that of a freelance writer who probably doesn’t even own a guitar, and has merely researched an article… likely with Google… rather than done it for themselves.

Might be worth taking it to a luthier / guitar tech?

I also can hear my plectrum hitting the pick guard at times when strumming and have been trying to lighten how I strum to stop it. It’s not loud enough to be a big issue, but I hear it and it jumps out at me.

@Goffik oh how I hear you. Those first marks on a new guitar hurt! When I asked my luthier if he could take out marks I’d made with my fingernails, he said “Consider them part of the guitar and the music you make with it.”

Have a look at what Tommy Emmanuel does to some of his guitars. Might be worth taking it to a luthier / guitar tech?

Oh I’m sure they could fix it easily enough, but I don’t like relying on others for things I should be able to do myself. I’ve done all other guitar maintenance and adjustments myself to date, plus money is tight right now.

Neither of my acoustics have pick guards, something I’ve never considered a problem since I don’t recall ever hitting the body with a pick. I never realised fingernails could do so much damage…

When I asked my luthier if he could take out marks I’d made with my fingernails, he said “Consider them part of the guitar and the music you make with it.”

This was my first thought, before I even posted this thread. Makes the guitar my own, and it’s not like resale value is a concern since I will never sell any of my guitars. Unfortunately I can’t help feeling bothered by it though, given the guitar is so new. Perhaps if it was a year old or something, but a month?

Thing is, I tried some alternative strumming methods earlier and didn’t get on so well. To keep my fingers away from the body means physical effort, which means I’m not relaxed, which means I don’t enjoy it as much or play as well. I might just have to try and get over it and put up with a brand new guitar looking scuffed up…

Thing is, I tried some alternative strumming methods earlier and didn’t get on so well. To keep my fingers away from the body means physical effort, which means I’m not relaxed, which means I don’t enjoy it as much or play as well. I might just have to try and get over it and put up with a brand new guitar looking scuffed up…

Yep I think this is how it is Goffik. My guitar is 4 years old now and I’ve learned to live with the marks I’ve made on it. It was the first few that had me feeling very upset, just as you are. Ironically, as my playing improves I no longer inflict damage with my fingernails. I’m also wiser in the moving around while I’m wearing or holding my guitar. That clumsiness caused few knocks I wish hadn’t happened.

I can’t help with the buffing. I scratched my fancy Maton after owning it a few weeks… was careless and scratched the side of it. I reckon I’m just going to live with it.

Have you seen Willie Nelson’s guitar? It’s so beat up and famous it has its own Wikipedia page Trigger (guitar) - Wikipedia

Willie Nelson’s guitar looks well used and appreciated. Guitars are made to be played and dings and such are all part of the process to my mind, they are of course precious, but also tools to be used; while Chet Atkins was playing a gig following each song some guy would comment on how good the instrument sounded, after this going on for much of the performance, Mr Atkins finally took the guitar off, put it on a stand and asked the guy, ‘Now, how does it sound?’. i like that story, its all in the fingers.

I’m wondering if anyone here has any experience of buffing/polishing guitar lacquer?

I would be with the accept the worn in look camp, however, I have had success with wet and dry - same as a car scratch repair following an incident

with a router on the electric. On a gloss finish mind, not matt.

Have you seen Willie Nelson’s guitar?

Haha, just a little bit worn! Perhaps it will make me feel better if I create a Wikipedia page for mine too?

Seriously though, thanks for the comments guys. I’ve woken up today a bit less annoyed, and I think you guys are right… I should leave it alone. This guitar is going to be a workhorse after all, so is likely to see a few more dents and scratches in the coming months. As long as it sounds good, that should be all that matters.

Late to the party but I agree with others Goffik, it makes the guitar unique and yours. Shows how much the instrument is loved, a bit like a battered book that has been read to death.