It is fun listening to you batteling with your alter ego. He, it, nitsuj does this, he does that. As if you are really talking about somebody else when, in fact, it is yourself you are refering to.

Good to see you made it. Holler if you need anything.

Thanks for the lessons! Very good so far. Just have a question on the C major scale. Why are we ending on G (3rd fret on the high e)? Wouldn’t we play C to C?

Welcome to the Community, Derek

If you count this when playing the notes, simple 1 2 3 4 1 2 3 4, then you will start with the C at the 3rd fret A string, play the highest note as G as you said, descend to the lowest note, open E on the E string and final count of 4 would be on the B at the 2nd fret A string. Then you can repeat the cycle maintaining the rhythm of the count.

Eventually when improvising using the scale you would not be confined to playing within a single octave (low C to high C).

But for practice purposes, I believe the main reason is to play over that count with your metronome.

I’m having trouble with the CMajor scale. I’m slowly getting there though. It’d be great if you could say the notes as your hitting them if that makes sense. Thanks for the awesome lessons.

Hello @DomT and welcome to the community. Saying the note names as you play them is an absolutely brilliant thing to do as you will be simultaneously learning the names of the notes on the fretboard. You start on C the root note and then ascend alphabetically to G, start again from A and keep going alphabetically.
In this particular scale pattern:
C, D, E, F, G, A, B, C, D, E, F, G
Then climb back down again.
Cheers

The chain is theoretically endless. A grand piano with 88 keys spans seven whole octaves plus some extra notes. Many more than a guitar. A 22 fret guitar spans three whole octaves plus some extra notes. But it would be a Herculean task to learn any particular scale across the entire fretboard all in one big chunk. So scales are taught and learned and represented diagrammatically as patterns that span just a few frets - usually three or four frets, occasionally five.
The scale that you are learning spans from open strings to the 3rd fret and can use notes from all six strings. Look at the pic: 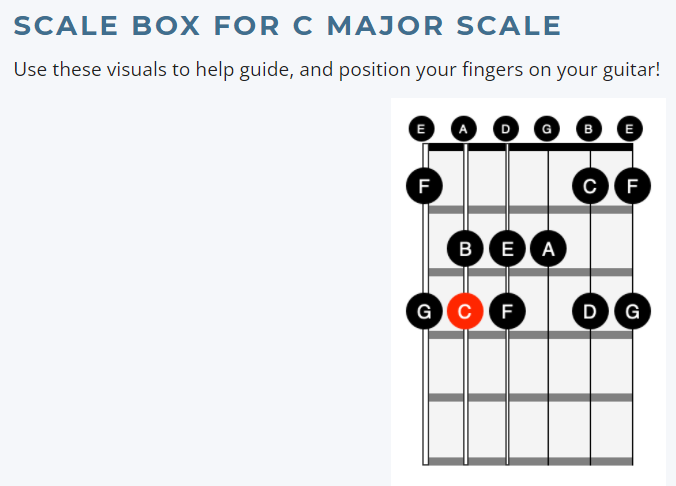 Notice that only the notes C, D, E, F, G, A and B are showing - because the C major scale is made up from these notes only. Each and every occurence of those notes from open strings to fret 3 are shown within this scale pattern. The starting point - to develop a root and to train your ear to hear the scale and its interval sounds properly - is always the root note. You ascend to the highest available note in the pattern and then descend back down through the pattern again. Playing up / down can become a cyclical practice exercise.
But this pattern stops at the note G on the high e string. There is a note A on fret 5 of the high e string which is in the scale. But reaching for it is to reach beyond this particular scale pattern. And for the moment you are learning an individual pattern. In time, you will learn another pattern and then another and more, and patterns do link together and overlap and become a continuous chain of notes across the fretboard. But that is all ahead.
Hope that helps.
Cheers

What’s the differnce between the C-Major scale in this lesson, and the “notes in open position” in module 8?

They are the same notes

@stitch I started to write a reply explaining open vs 1st position, but I got a bit confused myself.

The lesson Notes In Open Position | JustinGuitar.com starts with the names of the open strings, and then introduces the C major scale (implied, not called by its name) by showing the natural notes in frets 1-3.

I’ve just checked Leavitt’s Modern Method for Guitar, and on page 60 he writes, “Position is determined by the fret on which the first finger plays […] A position on the fingerboard (strictly speaking) occupies four adjacent frets.”

So I think it might be more correct to distinguish between the names of the open strings and the C major scale in the 1st position as shown on the chord diagram above.

@Jozsef
What’s your point. It’s still the notes in the C major scale.

Hello @plummerds and welcome to the community.
Justin writes this:

Just above this diagram: 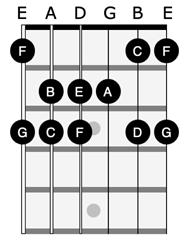 The diagram does indeed show an unlabelled C major scale in open position. This would more commonly - if learning the major scale patterns - be called the C-shape pattern 3 major scale.
All of these notes are natural - the C major scale contains no sharp or flat notes.
It is vital to heed this advice:

You are tasked with finding all notes, not just the natural notes. Use the diagram to figure what is on, say, the D string at fret 4? Fret 3 is the note F so it must be … ?

Just the difference between open and 1st position, but it may not be important at this stage of the course.

NO KIDDING HAHAHA!! In a recent lesson I watched, he cut to Nitsuj struggling with picking a chord and I about peed laughing so hard! When he says “I struggle talking with this third person or first person thing with Nitsuj” I don’t blame him for referring to Nitsuj as a separate person because if he said something like “Oh ‘I’ have issues struggling playing the open C scale”, it may come off like he can’t play it lol. But if he says “HE struggles with it” we know who he’s talking about his left-handed studies.

This is the same as playing the notes in open positions from module 8, except that it starts from C instead of E

Welcome to the forum Damien

I found this lesson hard to follow because of fast talking and also the diagram doesn’t show the order number of the notes in the scale. I think it would make it easier no?

I presume that you are looking for the below which is included on the website lesson description: