Can anyone help me with reading Rhythm in Justin's song books?

I’m having some trouble reading some of the Rhythm notation in Justin’s song book. I don’t see a legend anywhere in the book describing some of the symbols and I can’t find it online. Does anyone know what the following symbols mean? 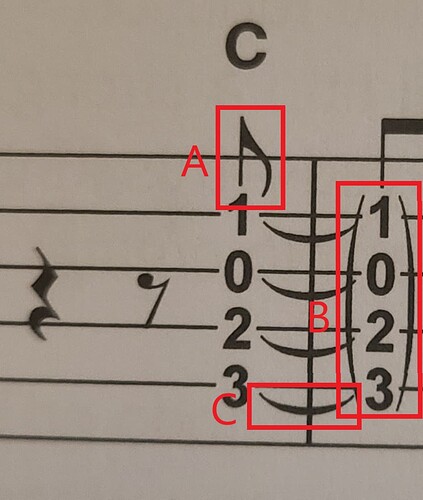 A. The Symbol above the chord there. I have no idea what it’s saying.
B. Parenthesis around the chord. I know from the symbol above, I should be strumming down here, but I don’t know why it’s in parenthesis.
C. The arch between the chords.

It’s a musical tie. You might want to check out the Rhythm Maestro course for more details.

Thanks, and I also saw there that he also has a book on reading rhythm! Just purchased it.

Okay for anyone using the Tab in Justin’s book and is also confused I “Think” I understand based on a cursory look at his rhythm book. Tab doesn’t show duration or tempo so instead he’s using Rhythm notation to show it. I’ve seen instances online where others will show the rhythm notation above or below the tab (Like the image below) but to save space I’m assuming Justin is just combing them. 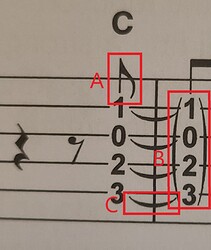 image918×1083 59 KB
A. So I think this means play that chord for 1/2 a beat or an 8th note
B. Parenthesis I think means its ringing out.
C. I think it’s tieing the chord to the next measure/bar. Saying it should still be ringing at this point.

So in summary, I think he’s saying play this chord mid beat (based on the half beat rest before it) and let it ring for half a beat which means it ends in the middle of the first beat in the next measure. The tie and the parentheses I think are saying “Hey, this is that chord you hit just now. It’s still ringing”

Again, this is a cursory look through the rhythm book so I could be way off. I plan on getting to this book eventually cause it seems that the chords and tabs are only half the picture if I could read rhythm I wouldn’t necessarily need to even listen to the original track to play. Not that I would ever do that I just thinks it’s pretty cool.

Whenever you see a flag on a note it just indicates it’s an eighth note. The symbol immediately before is an eighth rest. And the curved line is a tie. Just letting it ring out for the duration.

There are also sixteenth note variations of the flag and rest. You’ll eventually run into those as you study more.

Thanks Joe! Glad for some confirmation. Excited to get into this book eventually.