So, a few days have passed and as mostly the case, I have moved on from the crushing disappointment to just disappointment. And the silver lining of the dark cloud is becoming more apparent.

I had been quite focused on learning enough finger picking skills by July that I would not be the person who slowed progress for the class. Now I can get back to my regularly scheduled programming, continue my Beg 2 consolidation and explore the first lessons of Beg 3. All is good…cue 3 Little Birds

Thought I would take a moment to add to this log. The last couple of months have been an up and down adventure. But still good overall.
I wanted to get another video out and chose Yellow Submarine thinking it was low hanging fruit that I could pull together relatively quickly. WRONG!! It has taken weeks of diligent practice to get a reasonable handle on the song. I am getting there and hope to record something in the not-too-distant future.
While I struggle with YS I continue to delve into lesson 15. One of the modules is playing a duet using a capo. Not having found anyone to regularly play with, I decided it was high time I learned to use my Trio+.
Talk about an eye opener! The process of constructing the four loops I wanted really exposed my poor sense of timing and not very good chord fretting. The remedy of course is to back up some and put timing and clean chord fingering front and center in my practice routine. Now I understand why Justin said it would take 2 - 3 months to consolidate Beginner 1 and 2. In my case it may take a bit longer but I am resolved to shore up my foundation before going much further into Beginner 3. Fortunately the structure of lesson 15 allows ample time to go back and clean up stuff.
My decision to delve into the Music Theory class is paying dividends. I really do feel I am beginning to understand how it all comes together. Beginning is the operant word but the fog is lifting.
One other major piece of my music adventure has been missing and holding me back a bit. Remember how I stated my goal was to learn to play guitar well enough people would no longer leave the room when I picked up the instrument? Well even with my struggles with timing and chord grips, I have progressed enough that when I have played for folks I have gotten good vibes and encouragement to keep playing; however, there is this one piece of the puzzle that I can tell still causes angst with my number one fan. Linnea tells me that my guitar playing is good to her ears but my singing leaves a lot to be desired.
I can’t fathom playing and not singing. After all doing both is great fun for me and a necessity if I want to play at an OM, a Farmer’s Market or just busking.
After a lot of cogitation and head scratching I came to the conclusion that I should approach the singing aspect of performing exactly as I have approached playing the guitar. So today I signed up with Chris Liepe for his 12 week Discover Your Voice course. The amount of time I will be devoting to this whole crazy adventure just increased. But I ain’t getting any younger and chasing the dream requires a re-prioritization of my daily activities. After all, the little voice in my head keeps telling me I am retired and I should start acting like it

So, off I go to see what awaits me around the bend…

Love the update, Robert, sounds like you are making good progress.

As for singing, I felt the same and did the DYV course. It took me nearly a year. For me that 12 week course became a 12 module course, and many took quite a few weeks.

While on DYV I continued with songs and consolidation, but it somewhat marked time.

But it as so worthwhile overall, DYV made a massive difference to my ‘singing’.

Terrific update Robert and a very interesting read. I’m not far off completing grade 2 so hearing how others have approached consolidation and what route on from there is very relevant. I’m also looking at doing more theory once I’ve rounded out the modules so pleased to hear of the benefits you’ve found from it.
Looking forward to Yellwo Submarine when you’re ready!

Good update Robert. You will have no regrets signing up with Chris. Like David I took my time, as I was in no rush to “get it done” in 12 weeks. I’d not sung well for nearly half a century so what was the rush. I not only found my voice, I found my singing confidence. So take your time and enjoy yourself !

@DavidP, @Notter, @TheMadman_tobyjenner
Thanks, gents for the support. It helps to know I am not the first to venture down this path. Reigning in my expectations and taking my time is a constant tension. So often I wish I had found Justin and this community when I was younger, the fingers were more agile and the clock wasn’t ticking so loudly. Just going to keep hitting the snooze button on that clock and enjoy the dream chase!

Great learning log, getting to hear your story was really nice. Love that you are looking after trees to help take care of the planet. I get really upset at the wastefulness of society over here in the states, watching what some folk throw away every week is crushing.

Following your guitar progress as I can feel the parallels. I am trying to avoid the singing rabbit hole, as I feel I am getting to the point where there are to many distractions from discernible progress.

Thanks, Phil. I gave the singing lessons a lot of thought for just the reason you mention. For me, singing is an integral part of my enjoyment, so I opted to make the time. It remains to be seen how much additional time the lessons will consume.

A milestone has been reached!

Yesterday evening our neighbor across the road held a small party to celebrate the Gemini birthdays of herself and others in her group of friends. The invite requested we bring food, good vibes and maybe a song. Linnea made an audacious chili and I took my guitar. At this point I only have a few songs that I feel comfortable that I can get all the way through without too many flubs.
What was I thinking? Perform in front a group of people I hardly knew? Risk throwing a wrench into a joyous gathering? Even though I have practiced playing ‘Happy Birthday’ finger style I definitely have not mastered it.
Long story short: After a sufficient quantity of sangria, my hubris emerged and the guitar came out of the gig bag. The immediate request, of course, was to play ‘Happy Birthday’! What the h— was I thinking!!! I tried explaining that I did not have a sufficient grip on the song to attempt it. The group was having none of that and they insisted I at least give it a try - so I improvised something over a C chord that sort of sounded close and people sang happy birthday to the Gemini folks. They thanked me for the attempt. This was going to be an easy crowd and perfect for my first ‘public’ performance

With a bit of banter and encouragement for folks to sing along if they desired, I launched into my set of 4 songs: 3 Little Birds, Ain’t No Sunshine, Chocolate Jesus and Yellow Submarine. (before anyone goes looking for my AVoYPs of the first three let me state that I feel I have improved over those recordings, especially Ain’t No Sunshine

).
To my amazement and utter delight people did sing along, applauded politely and even came up and thanked me for the effort.
I won’t say it was a stellar performance, or even a good one. But no one walked away or made fun of my playing and singing. That right there is huge in my book. I picked up my guitar and no one walked away or gabbed while I played. Of course, the real test will be, if I perform for the same group, their initial reaction to grabbing my guitar…

What a moment to celebrate, Robert!

Tremendous Robert! Congratulations mate. Thats a massive milestone, and I’m sure you did well. Sounds like the crowd enjoyed it too.

Well done Robert. That certainly was a milestone. To play live in front of people you hardly know. Wow.
You have the same problem as me. Being older, when people see you with a guitar they assume you’ve been playing for 50 years and the expectation, whether real or imagined, is that you’ll be really good.
It sounds as if you’ve managed to be really good!

And for those people who perhaps secretly wish they could also play guitar, sing a song, then anybody who can play and sing a song that is recognisable is in another league altogether

Well done and I bet you felt great afterwards! Sounds like an ideal first performance.

@DavidP , @sclay , @sairfingers , @Rossco01
Thank-you all very much! I doubt this would have happened without the support and encouragement from this fine group of people here on the JG community.

Gordon, add to the fact that we are among the more advanced youth, I was easily the oldest person at the event by a good 15 years! Who knows, maybe some in the crowd were amazed I could play anything at all!!

Funny you should mention that. When I finished a gentleman came up to me and wanted to check out my guitar (I was playing my Taylor Academy 10, my campfire guitar). He was intrigued by the beveled edge where your arm crosses the top of the guitar. When I handed him the guitar, he ripped off the opening of ‘Moondance’ using triads up and down the neck. I asked him to play a song. He blushed, handed me back the guitar and said he had an old Yamaha and had not seriously played for years. I suggested he check out Justin Guitar and get back into it. I hope he does. 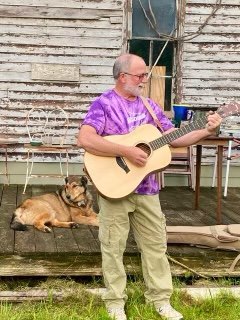 Playing at the party. Here is a strategic thought:
You can’t get booed of the stage if you don’t stand on it

Nice Robert,
Good that you did that…

From now on it will only get easier

@roger_holland, thanks for the read and encouragement!