Connecting Multi effect to Amp which settings has priority and how to?

Please look at this picture 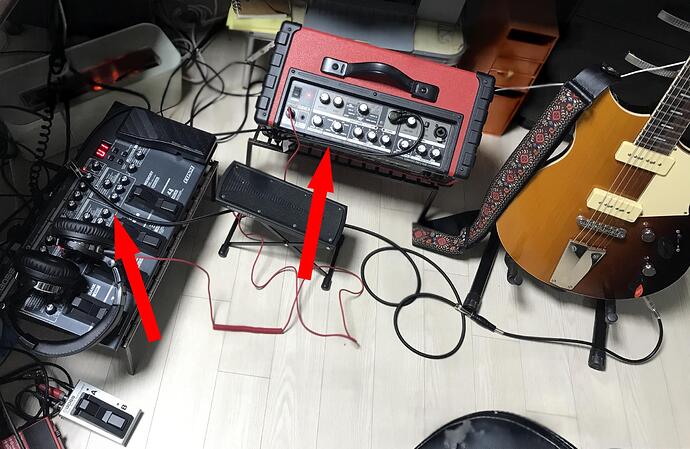 2500×1628 464 KB
When connecting my multi-effect to my amp
I get lost and confused. I understand about all multi-effect settings but
what about this Amp? What to do with Amp settings? because
the preamp of multi effect gives bass , middle , treble , reverb etc so what about the amp?
Also gain etc? on Amp?
Rossco01 August 25, 2022, 4:52pm #2

There are a few ways you can connect a MFX to an amp and some of it depends if you are just using the effects or are also using the amp models.

I’ll assume given your post you want to use the amp models. Ideally your amp would have a FX loop and then - generally - you’d just plug your mfx out into the fx return which would bypass the preamp of your physical amp… most of the amp knobs would then have no impact on your sound… the only one that should would be the master volume.

If you’ve got no fx loop you go into the normal guitar input and then unfortunately all the knobs will affect your mfx sound. In these circumstance try and choose the cleanest amp setting you can. Set your eq to 12 o’clock and then turn off all fx in your amp ( assuming you don’t want them on top of your mfx output ).

There are other ways - particularly if you have a fx loop - to connect your mfx ( the 4 cable method) but the above should suffice in most instances.

Another thing you might want to consider ( if you have the option ) is to disable the “cab” on your mfx as obviously you are going through a physical cab. It doesn’t always sound better but it might. A lot depends on the type of amp.

Thanks , I am not sure if it has fx loop I have this 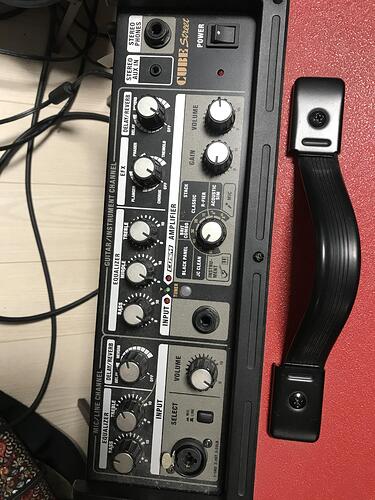 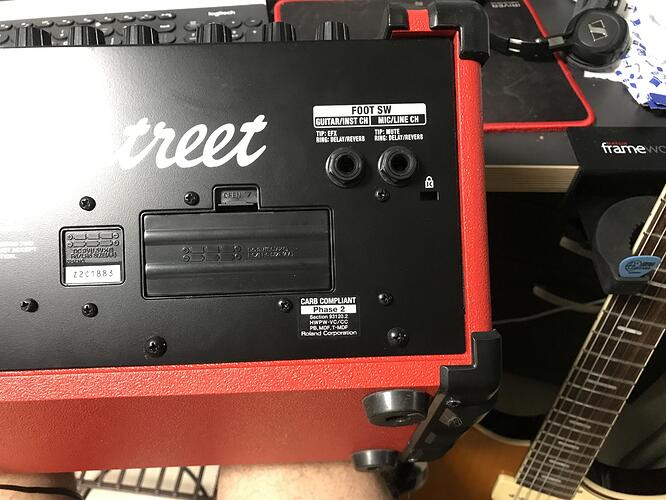 No you don’t have a fx loop

What to do with Amp settings? because
the preamp of multi effect gives bass , middle , treble , reverb etc so what about the amp?
Also gain etc? on Amp?

Whether this is what you want or need is something only you can judge, and it’s best to understand this through experimentation.

The same applies to other effects like gain: if you set a light gain on the multifx, and then turn up the amp gain, then the output will be higher gain.

Note that “gain stacking” is not uncommon in the guitar world, with some guitar players chaining multiple overdrive or distortion pedals to achieve different levels and qualities of gain.

Again, you need to experiment to work out if this is what you want.

The easiest approach though is to set the amp as neutral as possible, and just use the multifx pedal for all changes. In other words, set the amp to a clean setting (probably Instrument setting in your case) with neutral EQ (all EQ controls at 12 O’clock) and no effects on the amp.

Set your eq to 6 o’clock

Do you mean 12 O’clock. I don’t think it’s physically possible to turn those knobs to 6.

an Amp does nothing more than a speaker does

Set up as I suggest with your amp, pretty much, although they may sound different due to differences in speaker type, cabinet, and room placement. Use whichever one works for you.

Personally I would tend to use the amp as it means I could use it without having the computer on.

You also have the option of using the effects in the amp as well if you want. As I said, it’s up to you.

Note that normal guitar amps are not completely neutral and would normally sound quite different from your PC speakers.

The amp you have is not what I would call a typical amp. It’s more a street performers amp designed to work with guitars, keyboards, and microphones.

It’s basically a big FRFR speaker with some amp modelling.and effects. The amp modelling and effect in the Street Cube are going to be very similar to that in your multifx unit as they are from the same company. So in your case there’s probably no benefit to using the amp tones over the multifx tones.

The only advantage I could see would be to stack the effects to get something more than you can get from the multifx alone, such as multiple delays.

If you had a different amp, there might (for instance) be a different character to the pre-amp gain in the amp compared to the one on the multifx unit. You might prefer the amp one over the multifx, or you might like a boost from the multifx into the amp to drive it more.

Wow, I learn a lot from your answers . OK fully understood .

Now If I am going to buy a new amp so that I can use my multi effect to cover for some functionalities that make an amp more expensive,

Will around 1000 US Dollars give me a good amp to use at home as well as playing in a small group ( busking ?)

I didn’t say anything about “more expensive”.

Note that classic guitar amps don’t come with much in the way of effects. Typically they might only have reverb. Some also come with a vibrato effect.

Obviously all guitar amps normally come with a pre-amp and that will, normally give you some sort of “overdrive” capability. Depending on the amp and the sort of music you want to play, that might be all the overdrive you need, or it may not be enough.

So with a classic analogue guitar amp with a preamp (with gain control), some reverb, and an EQ section if you want any other effects you need to use external pedals (which could be a multifx system).

What you currently have is a sort of hybrid setup, which isn’t so uncommon these days as many more decent amps are modelling amps and have a bunch of stuff built in. But that means you have an overlap between your amp and your multifx system.

In your case it’s a big overlap because both systems are made by the same vendor, and so probably use the same modelling algorithms and, thus, sound identical.

So, to go back to your original question about “priority”, if we read that to say: “should I use the FX in my multifx pedal or in the amp”, the answer is: it makes no difference because you will get the same result whichever you use.

Your current setup is perfectly good and if you are happy with it then stop worrying about it and play!

Of course, if there’s some very specific things you find aren’t working for you that you want solutions for, then that’s fine. But I don’t see that in any of your questions.

If you just have a general feeling that “the grass must be greener on the other side” then I would suggest you take a step back and ask yourself why you think that.

There is a tendency amongst guitar players to think that there is some “magic bullet” that will make them happier or make their guitar playing better. This is a view encouraged by the industry who want to sell you more things and, to a degree, by other guitar players who kind of want to justify their own habits.

I’m often as bad as other people (I certainly have more gear than I need) but in my case I justify it because I’m a technologist and a gear head who likes experimenting and learning about equipment. I am under no illusions that it will make me a better player or make me significantly happier or more satisfied about my setup, unless it solves a very specific use-case I can’t fulfil in another way.

Despite my buying habits, I am actually very satisfied with the setups I already have. I buy new stuff for fun and because I’m in the privileged position that I can afford to do so.

Back to you: you seem to want to buy stuff for a different reason: that you feel you would be generally happier or more satisfied with different kit. I would warn you against that because that way lies madness (or, at least, discontent and potential mental health issues).

If you follow that route then, in my view, within a few months you will be equally dissatisfied with your new kit and be looking around for some other thing you can buy to try to make you happy.

My advice is to stick with the kit you have. It’s perfectly good. Learn how to use it, learn how to play with it, and stop worrying about whether there’s something else that’s better because there ALWAYS is something, but it’s NEVER better enough!

I could never get a better answer than this. perfect, excellent. It made me calm down and concentrate more on my performance than on gears. Thank you very much

Now If I am going to buy a new amp so that I can use my multi effect to cover for some functionalities that make an amp more expensive, I need but don’t currently have.

(fixed it for you)

If you can express the specific things you need, then we can advise.

Will around 1000 US Dollars give me a good amp to use at home as well as playing in a small group ( busking ?)

There’s some very good guitar amps for well under $1,000. It depends what you are after.

You already have an amp that is more than good enough for busking. It’s probably the best-selling and most-used busking amp range of all time. If you have plans to do busking, then whatever else you buy you should keep the Street Cube.

Any other, more standard, guitar amp you buy is probably going to be unsuitable for busking.

By the way, playing in a small group isn’t “busking”. More normally that’s “jamming”. Busking is where you very specifically go out onto the street and perform. It can be done with a group but it’s probably most commonly done on your own or with one other person.

The requirements for an amp for solo street performances, which is what the Roland Street Cube you have is excellent for, are very different from a normal guitar amp you would use for jamming.

But, to be clear, there’s nothing wrong with using the Street Cube for jamming either.

Electric guitar and all of the technology and gear around it can be complex to understand, and isn’t always that well explained (or that easy to explain). Any questions you ask, are likely to be things that others don’t understand, or perhaps even have considered, so the answers are going to help more than yourself.

I would also encourage you to explore for yourself as, often, it’s the best way to understand what’s going on. For instance, now I have told you about the cumulative effect of the multifx and the onboard fx on the amp, you could try experimenting. Some ideas include:

Above all, have fun experimenting. Don’t take it too seriously and don’t think this is necessarily about coming up with something that sounds great. It’s about learning how your gear works.