): I’ve caught myself resting my left elbow on my leg while I’m playing.

Obviously this is a bad habit, so I was wondering if anyone else had overcome it in the past and what cunning tricks they might have used to break the habit (apart from the obvious stand-up-while-playing trick)?

Lol… I thought I slouched too much, but I never got low enough to lean on my leg while playing.

Perhaps you could try a posture corrector. I was using one a number of years ago to fix rounded shoulders caused by too much sitting/slouching. When playing guitar it helped me sit up much straighter, shoulders back, and broke my habit of leaning far too heavily on the guitar itself.

Ha! Thanks, I had thought of it as being relaxed, but if I reframe it in my head as “slouching” that will probably do the trick!

Hey Ross,
I’ve actually noticed that I occasionally do this as well, and it really seems to depend on where im sitting.
If I’m on the sofa, which is a bit lower and pretty soft, then my elbow rests on my knee.
When I’m sitting on a hard chair, I naturally sit straighter and my elbow doesn’t come near my knee.
Might be a thing to check out?

The best thing I can suggest Ross is to stand and practice/play. No elbow resting and it does wonders for your posture. It will feel strange for a while but once you’re used to it you’ll wonder why you didn’t do it sooner.

Yes, the sofa does definitely have some blame here. I think the sofa is lower, so my knees are higher (relative to the seat of the chair) and thus more tempting to rest an arm on. It would still be nice to be able to play sat there though, so I’ll have to work on the not-slouching thing. It is probably going to be easier to sit up straight when I stop trying to see what my hands are doing. Maybe play with my eyes closed?

I got myself a stool to practice on, no more slouching and it makes the transition to standing up playing easier too. 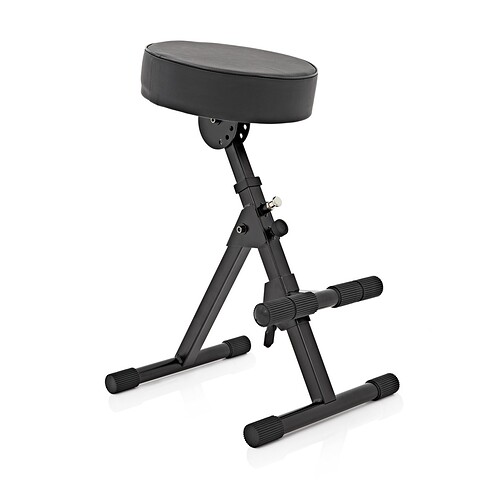 For a real laid back posture check out metal dad on YouTube https://youtube.com/c/MetalDadDan

It is probably going to be easier to sit up straight when I stop trying to see what my hands are doing.

Yeah for sure! Not hunching over trying to look at the fret board helps a lot! Still need to do it myself too often though!