New bass. I’ll have to take a dremel and smooth out the corner of the nut as it literally cuts into my hand whenever I go for the F on the E string, but other than that, I love it. 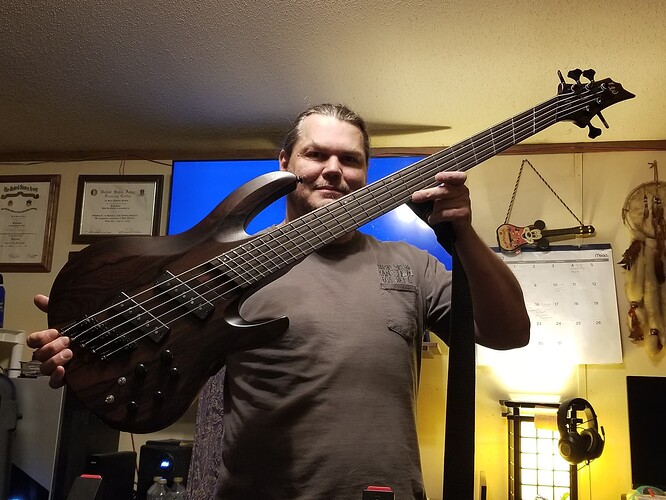 What exactly is a multi-scale bass? I see the frets are angled as you get closer to the nut so figure that must have something to do with it.

Nice bass, interesting to see and hear what difference fan frets make, I know that it’s a development to improve the accuracy of the notes and improve intonation plus it’s more important on longer scale lengths but never heard it in action.
@DavidP will be interested also

A multi-scale bass is an instrument where each string has a different scale length. The B string on this bass is 37 inches while the G string is 34 inches.

From my understanding (and I can hear this while playing) is because the physical wave-length of the lower notes is longer, the strings can more accurately ring out those notes. That probably doesn’t make sense explained that way. The end result however is that the B and E strings are clearer and more powerful sounding than on all my other 5- strings, while the shorter scale notes D and G are still short-scale and taut.

Because I press down kinda hard on the strings, I have a natural growl in all my playing. With this bass, the growl has become a roar. I can rock my house off it’s cinder blocks. Hitting the F on the E string at that first fret is difficult though and sliding up to the F can easily cut my hand if I’m not careful so I will be taking a dremel to it. Or have a professional do it so I don’t shave away too much resulting in the nut not being able to hold the G string any more.

Thanks for explaining, John. I shan’t worry about the physics. Look forward to hearing the bass roar on a cover play-along video at some point

From my understanding (and I can hear this while playing) is because the physical wave-length of the lower notes is longer, the strings can more accurately ring out those notes

A brief bit of Physics:

For a given string (i.e. ignoring string materials, construction, etc.) the longer the scale length, the tighter the string has to be to play a given note.

Also, at lower tensions, the smaller the difference in tension is to put a string out of tune. You may have noticed how much more finicky the low E string is to tuning than the high E string, because a small adjustment on the low E has a bigger effect.

Put another way: with a shorter scale length your strings will be looser and more likely to go out of tune. This includes going out of tune due to the pressure of your fretting finger. They are also more likely to have fret buzz.

So, by making the bass strings a longer scale length, it allows the strings to be tighter and more accurate, whilst keeping the higher strings at a playable tension.

@Richard_close2u is the resident Science teacher, who may be able to weigh in here.

Your fingers are going to have to learn how to walk all over again!

@Richard_close2u is the resident Science teacher, who may be able to weigh in here.

Thanks for the tag Keith but my thing is maths, not science / physics and (mathematically speaking) not even much in the way of mechanics. I defer to others on these matters.
It is true that shorter scale length requires less tension for the same pitch (think Fender vs Gibson for the most obvious comparison).

The main advantage really is more prevalent in Metal than other genres is that it makes very low drop tunings work, some go as far as drop A but drop C is more common. The string gauges are different from a single scale length guitar, the thickness of the strings are optimised for the scale length.

I practiced with it today (about 20 songs) for the first time. Mixed feelings. I like the weight. My last bass was heavy at 8.5 pounds, this one is 10.5. I thought there’d be a noticeable difference but there’s not.

There’s not a lot of change in playing with the fanned frets except on the first fret of the B, E and sometimes A string. The way the frets are at a slant it brings the nut RIGHT where my hand needs to be when playing anything requiring those 1st fret notes.

I honestly don’t know if I’ll be able to adjust to that. Some songs like “Symphony of Destruction” is easy to play once my hand is there, but other songs like “Fairies Wear Boots” where my hand is moving back and forth over the nut repeatedly are much harder. The side of my finger hurts from slamming into it when fretting the F on the E string.

I’m thinking MAYBE taking a Dremel to it and shaving down the nut on the underside so it’s just a smooth lump and let a callous build up but that would require alterations and the bass is just too expensive for me to take a power tool to it. I could shave away too much making the nut not able to hold the G string anymore.

Oh bother. I’m also thinking of just returning it for a bass with a regular neck so I don’t have to worry about making changes to my playing and instead get something cheaper and more traditional. I totally didn’t anticipate the nut being this big of a problem. Maybe I can work on my wrist rotation to come at the frets from another angle but that requires a complete change in my playing habits. I admit, I may have bought the wrong bass for me.

But dang, those B and E strings do sound REALLY good. 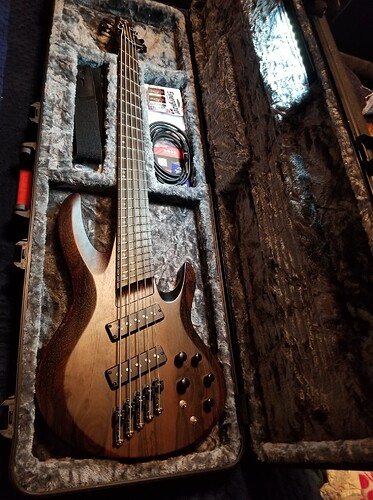 what a BEAST!
have fun bro!

An unfortunate conflict, John, follow your intuition as to what to do.

Does look great in that case

Brings a new meaning to no pain no gain !

After speaking with Sweetwater, where I bought it, they’re going to send me a new one. They’re going to give it a set-up to my specs first, which I gave them; hopefully address the nut for me and ensure the truss rod cover fits on the new one. Just waiting for shipping label to send this back.

I suppose problems where to be expected. It’s not a standard bass, there’s still a lot of custom stuff on it from ESP so they can’t just throw it in a PLEK machine. Cross my fingers.

Lets hope the new one doesn’t give you the same grief John. Is it like for like exchange, colour etc?

Yup. I’m hoping they can do magic on that nut.

Yup. I’m hoping they can do magic on that nut.

I hope you asked for the black stuff

and not that white witchy rubbish