F Chord in Take Me Home Country Roads in the App

This is just an observation not a criticism, looking at songs to pass Grade 1 and have sort of homed in on John Denver’s Take me Home Country Roads as one of the five.
However it has the F chord, as far as I can see for one bar only. As only on Grade 1 have not come across it in lessons but well aware of issue with barre chords.
If you look at the song on the app, see below, It shows the Barr chord on the graphics but Fmaj7 in the fingering and during the song it shows the barre chord. 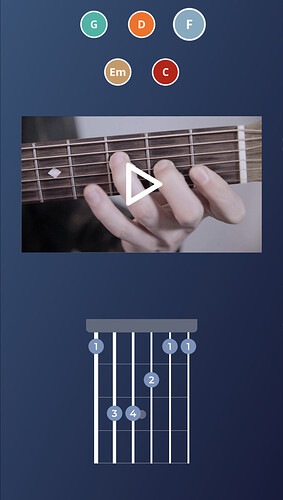 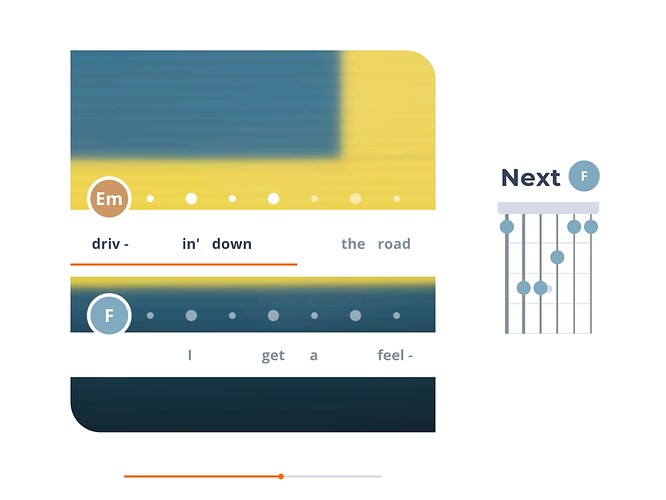 The Fmaj7 for a Grade 1 beginner is certainly achievable as the Grade 2 lesson says it the same shape as the C chord.

If you go to the lesson on the song for at least part of it Justin does use Fmaj7, see below, seems to mute the 5th and 6th strings. 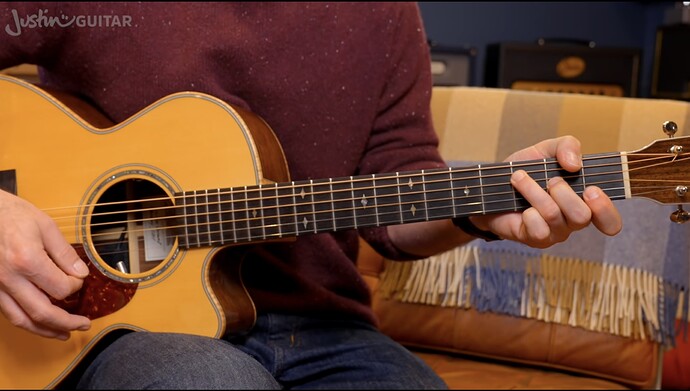 As I said just interesting no more.

@MAT1953
Hi Michael, you’re right, there is one bar of F in the bridge section of Country Roads. I think in your last photo Justin is playing mini F which is a mini version of the full barre F.
First finger on the first fret of strings 1&2, second finger second fret string 3 and third finger third fret string 4 (root note F) You can mute 5&6 with your thumb as he is doing, or mute 5th with third finger. It’s a 4 string chord.
I use mini F in Country Roads for now as I know it from years ago. Some people say it’s a hard chord because of the first finger but I find it to be ok.
Try it, see what you think.

@MAT1953
Thanks for the observations, Michael.

Just my own curiosity, what prompted you to pick the song for Grade 1 consolidation?

Given the inclusion of the F, irrespective of how you might play it, I’d expect the focus to be on songs that make use of the basic 8 open chords taught in the Grade.

@Socio
Thanks James. Doesn’t seem appropriate. I’ll take a closer look and if needs be raise with the team.

An interesting and valid question, let me answer it as follows

I already have four songs to use to pass Grade 1 so looking for a fifth.

Two of the songs I already have a change of chord within a bar, one with strumming pattern of DDDUDU which I can do. In the other, Last Time by the Stones, I could have used OF but the change of chords is in every other bar and decided not to overcomplicate things and go for four down strums, so was looking for something more straightforward to use OF.

Also, it is not just playing the chords but singing as well, so that needs to be a consideration. (Singing is something I thought I would not be doing when I started out on the JG Lessons at the beginning of the year but was persuaded otherwise by some prominent members of the Community)

I came across TMHCR as a lesson, it was familiar to me as my wife, to be, was very keen on John Denver Songs back in the early 1970’s. I was not really but the song was well known to me.

When you look at the lesson the F chord is mentioned in the bridge, when I went to App it took me a while to find the chord as it is only played in one bar.

I had no issues learning the chords, especially C and G that as my brain/muscles remember from over 50 years ago, so I thought it was worth giving it a go.

I am having to hold myself back could easily come up with another five songs to learn but will move onto those after I have completed Grade 1. Justin right, what makes learning guitar with his lessons great is that you can perform some of your favourite songs.

You are right about it being listed as grade 1, see below from website. Had not noticed this until you mentioned it.
Don’t yet have the Tabs yet, so don’t know if the F chord is included or another is substituted to make it Grade 1. 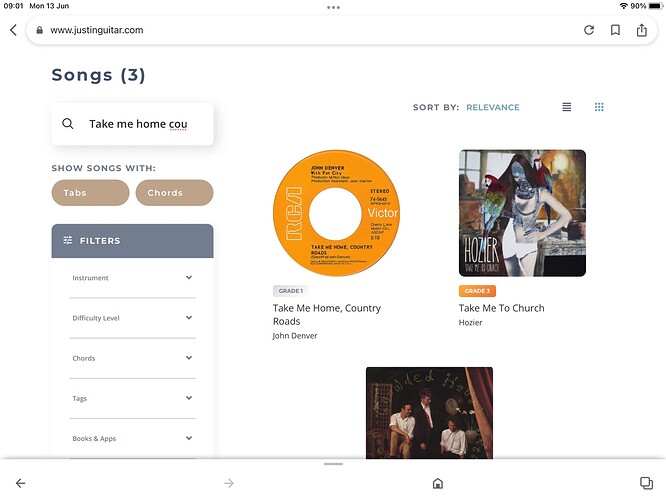 You are right about the lesson when I look more closely it is probably a mini barre over first two strings. Well spotted.

The app though could still be Fmaj7

Whatever it is in the App will not be changed by this however.

Whatever it is in the App will not be changed by this however.

I just had a look at the app and it does not appear to be listed under a grade/module category.

Thought I was just making an observation about the F chord in the song, but best to get it right for others, I see website has changed now.
However none of this has put me off still going to give it a try, if I was to change one chord in the song most people will not notice but I will not be doing that, it will be Fmaj7

Oh wow! Mountains and molehills!
All this fuss for just one bar!
Why make it a Grade2 song because of one bar @Richard_close2u ? You’ve denied Grade1 learners the chance to get started on one of the most popular singalong songs ever!
Justin knows it has a bar of F and he knows F isn’t a Grade1 chord yet he still introduced it as a Grade1 song. Maybe you should ask him why?

You folks have obviously never been to a country pub with the crowd belting out Country Roads. You could play anything you like instead of that one bar of F and nobody would bat an eyelid.

Country roads take me home to the place I belong

Glad I live in the real world.

The reason I think it was included in Grade 1 was that Justin included it in Stage 3 of the Classic Beginner’s Course as an app play along video and noted in the learn more section that there was “a sneaky Fmaj7 for just a bar in the middle (substitute Am and it’ll be close enough for Jazz!)”. In the new course for module 6 lesson 8 its included in the 4 easy guitar songs using the G Chord and states in the learn more section “It also has a sneaky F major 7, but use Am chord for a simple alternative”.

So might be best to keep it as a Grade 1 song but include the reference to substituting the F major 7 with Am if you have not learned that chord yet.

states in the learn more section “It also has a sneaky F major 7, but use Am chord for a simple alternative

Good catch and it is now back as a Grade 1 song.

Glad I live in the real world.

In your world and ours everyone can take a deep breath and relax again.

As I started this discussion can I just share some thoughts as a beginner just started Module 6, this is relevant see later.

Once you have learned a few chords Justin encourages you to play songs, for me at that point, playing along with songs on the app, guitar playing had me hook line and sinker. With what you know I then started to look around for other songs and in my case to my surprise sing as well. This throws up songs that in the past were not your cup of tea, but so what.

Learning Music Theory, ear training etc helps with you understanding but the beginner needs to be hooked on songs first.