Let's explore the mini A barre chord. Play this A chord variation using only your 1st Finger!

View the full lesson at First Finger A Chord | JustinGuitar

If you have the UK edition of this book then you are misled with wrong info. For years i was under the impression that i could not bend my finger to form the one finger A barre chord.

If you look at the picture of the A chord in the book you will see that the high E is open. So i was led to believe that some people just have more flexible fingers than me and made due using the 3 finger method.

Imagine my suprise when i saw justin explaining how he does it with one finger. I can play it with one finger now. With some more practice i should be able to get it pretty easy now. It was impossible before as i had to get a single finger down on three but leaving the high E open.

hopefully the pics came though… 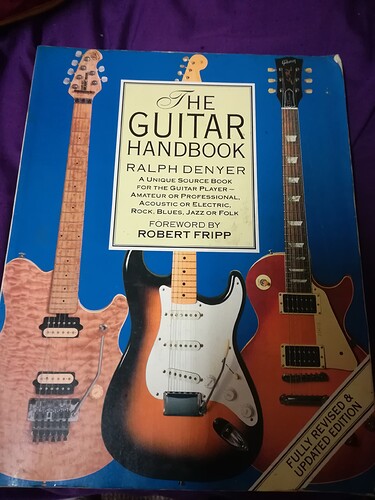 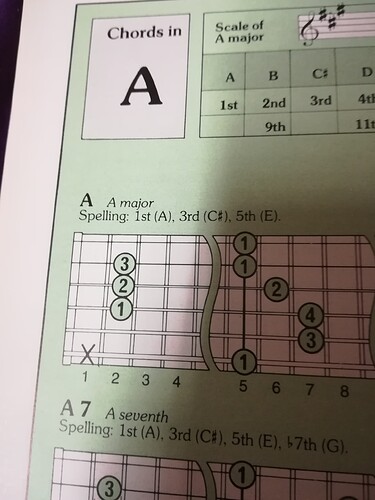 Hi pinky, the book isn’t wrong though, it just plays A chord with low E ringing out which is part of an A chord either way (A C# E). I think Justin mutes last string as well (beside the comment about not sounding as good as muted) as when you play A shaped barre chord usually you are not playing the last string so he is being consistent about it.

All up to a preference if you like high E ringing out or not, personally I don’t mind and can do both. But book isn’t wrong.

If you look at the picture of the A chord in the book you will see that the high E is open. So i was led to believe that some people just have more flexible fingers than me and made due using the 3 finger method

Adrian is correct the book is not wrong.

A U.S. edition of that book is one of the first guitar books I ever owned. I think it’s a great book, and spent many pleasurable hours reading it and working through the information. Seeing those pictures from the book gave me instant nostalgia.

Not really anything else to add…

I started many years ago playing the A chord with 3 fingers like Justin shows, with the index finger in the middle. Switched to using the barre technique with my index finger including letting the high E string ring properly. The barre technique is how I mostly do the A now, there’s one song where it’s still easier to do the 3 finger version, partly out of habit but also due to how it anchors my fingers for the D chord.

Because I’ve been playing for nearly 10 years now, various techniques like this I’m finding much easier to do now as compared to when I was first learning. My advice to beginners is to take the approach that is easiest for you, keeping it fun, rather than torturing yourself over what’s the correct / official way to do it. Clearly there would be exceptions to this, but keeping it fun so you are motivated to keep playing is of great value.

How are you all doing the up strums with this one? I find the dead high E string sounds like a mistake, even when I’ve got it fretted right. Do I just need to learn to not strum the high E for this one?

The muted high E string should not sound like a mistake, and there is no need to avoid strumming through it either down or up. With the correct muting you should be able to make confident strums with nothing sounding “off”. Just keep at it and it will start to feel more natural.

If you put a capo on the third fret, it’s fun to play the riff from the Encanto song Dos Oruguitas using this A mini barre. Just lift your finger on and off of the e string.

Any reason I can’t use my middle (driving) finger for this mini A? I can bend it better than my index finger.

ThunderRoad, I think any finger is OK. As long as you can bend the distal (last) joint of that finger back a bit. I use different fingers, depending on which chord I am coming from…usually it’s easier to drop an unused finger down.

In my case, I had a lot of parasitic muscle tension when I first tried to do this. I didn’t know how to relax the muscles that flex the fingers, leading to excess tension trying to mash the strings down with a straight finger.

You can practice gently bending the distal joint back when you are doing something else like watching TV. Over a period of days or weeks, this should improve flexibility. Just don’t overdo it… If you feel pain, stop!

Hello @ThunderRoad and welcome to the Community.

There are many reasons not to use your 3rd finger and only one to do it.

1] Using your 3rd finger takes your hand and wrist way out of position for moving to and from other open chords. This fingering of an open A is mostly used when playing other open position chords. Using your 1st finger keeps your hand, wrist and other fingers in optimal positions for efficient movement in your chord changes.
2] With 1st finger you have the option of using other fingers to play other fretted notes on other frets and other strings.
Examples -
a] 2nd or 3rd finger on the high E string fret 3 to make an A7.
b] 2nd or 3rd finger on the B string fret 3 to make an Asus4.
c] Stretching your little finger to the high E string fret 5 to give a top A root note to the chord famously used in the riff to Alright Now for instance.
d] Stretching your little finger to both B and E string fret 5 to give the higher register E and A notes similar to the example just mentioned.
e] Hammering on and flicking off your 2nd and 3rd finger to the B string fret 3 and the D string fret 4 respectively to give a classic rock ‘n’ roll move as heard in dozens of Rolling Stones songs - and the Alright Now riff just mentioned also.
3] You can reach up with your 3rd or 4th finger to the A string fret 4 to play a C# note and therefore play an inversion of A, a slash chord A/C#. This is used often in songs with an ascending or descending bass line as the chords move between G, A, C, D etc.

The only argument in favour of using your 3rd finger I can think of is that it will help that finger become adept at barring the middle strings when you come to play A-shape 5-string barre chords. But, in my view, that in no way gives enough reason to ingrain what I consider a limiting, or even a poor, technique of using 3rd for an A major open barre chord.

Justin says that the chord sounds better without the thinnest string. Do you think that this applies to other A-shape chords too i.e. when C is played on the third fret?

@Okku I have wondered the same for some time. Its clearly sill a Major voicing of the chord because it has the root on the A string, the 5th on the D, another root on the G and the 3rd on the B. Adding in the high E string gives you another 5th one octave higher.

Since my finger doesn’t to that ‘freakish double jointed thing’ to lay flat like Tommy Emmanual, I’m going with its up to us as the musician. Unless you are picking out notes and you need that one.

@Okku If you agree with Justin, then yes, the thinking applies to all A-shape barre chords along the neck.
If, as @John_in_Dot mentions, it is personal choice unless there is a specific part of a song that does need you to play the note on the high E string. In which case you will at some point have to figure out a way to do it … either flat barre of your 3rd or 4th fingers ahead of your index finger barre or, as others do, an index finger barre across all five with fingers 2, 3 & 4 fretting the other notes ahead.
Hope that helps.

So many ways to play a chord. As a classical player I learned this chord with the index pressing d and g strings and the middle finger pressing the C# on the b string. The habit persists.

@RiffRalf
If it works for now, all good.
Long term you will need to relearn as there are many songs and chord changes / embellishments where you need to have that barre formed and to have your 2nd finger available to do other things.

Personally I don’t like the sound of the high e string being muted, I can clearly hear it as it’s the last string hit. Any tips to reduce the noise or make it sound better? Actually come to mention it, can muted strings make different sounds, is that a thing? Playing it open is pretty hard to do consistently unfortunately.

I found that, with practice, the last joint of my first finger developed more ability to bend backwards, letting the e string ring.

I used to stretch it a bit by pressing it against the side of my thumb, while watching TV, etc.

Watch out for parasitic tension in the first finger. The muscles that flex the finger may need to learn to relax enough to let the joint bend backwards.

Another possibility is to let your pick stop on the e string on the downstrums, rather than playing the muted string. For me, this interferes with the rhythm of my strumming hand, but it might be something to experiment with.

Finally, you might be able to get more clearance (or a more pleasant muted sound) by angling your finger to be less parallel to the frets.