For What It's Worth

This is my first time recording and reviewing back in quite this way and it came out a bit of a rougher performance than I’d like… But rather than discard or keep refining - as part of the learning process and crossing the hurdle of my first AVOYP posting I’d still upload and share. My immediate observations: From a performance point of view - I’m aware listening back that the tempo drifts out a bit especially in the middle, I miss on one of the D Chord changes and I’m not sure about the tone. There’s quite a rasp sound (not sure if that is the term) that I’d not noticed just listening as I play rather than listening to the recording. From a composition point of view - I’m playing along to the original and so improvising the pattern a bit. The main guitar part in the video and the harmonics (I didn’t splice the video of that in in the end) are audio and I created the bass and drum parts as midi based on looking around and listening and adjusting a bit. I’d probably tweak more if I came back to it and drop it out towards the end when the solo guitar kicks in more.

For me - this was a snapshot and a bit of an experiment to see where I would get to doing the recording, video, backing track etc and next time I’ll focus more on the guitar part…

I’ll also look up the solo and add it to the list to look at when I get into looking more at lead guitar.

ps - not sure if there is interest in this side of it but here’s a screenshot from the Logic project. One thing that massively complicated things was that the original isn’t to a click track (not surprisingly) so is hard to line up to a grid and play along to both original and programmed tracks… 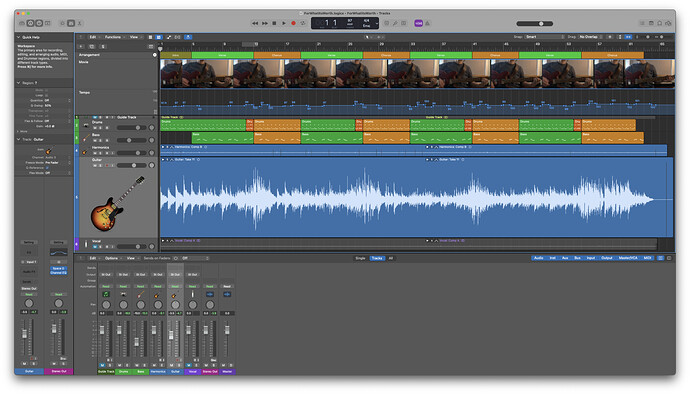 Hi Al,
For what it’s worth, that was a great starting post

Regular relaxed strumming action, clean chord changes, nice balance between guitar and backing track… and using the DAW on top of it all.
Well done, my son- you’re on the way to the crossroads

This was nicely played, well done

Syncing audio with video can be pain but after some practice it should be OK. What I learned from my videos is to keep the video files relatively short, up tp 10 min, sometimes is really hard to find a part of the recording session that matches the playthrough I want to sync it with.

Bravo and mission accomplished, Al. Lots of firsts, but first and foremost I thought the strumming was smooth and you kept the hand moving steadily, chords formed and changed pretty well also.

I noticed some inconsistency in the guitar sound, every now and then, perhaps just catching strings a little heavy but mostly it sounded good.

I think you will generally find it difficult to combine an original with midi. I know some of the members here, slice up and edit the original to try and get it more consistent in beat and tempo, or hand adjust note by note the midi. Personally I’d suggest do one or the other, depending on the song and what you can get done.

All round, keep doing what you are doing, you are going well.

Good go on getting that first AVoYP under your belt! I cannot add anything to what everyone else has said so I will just say keep at it.

Well done on your first AVoYP Al. Have some old school vibes from me. Haven’t heard that song for ages, I must look it up on Spotify.

Nice steady strumming technique and clean chords. Just keep an ear on the timing. I’m no big amp expert but perhaps add a bit of reverb to add body to the guitar sound.

Very solid AOVYP debut Al. Nice consistent changes and steady strumming. Good one to get under your belt.

Hi Al, well done on your first recording! It came out probably a lot better than you are thinking of it, you had a really good tone which suited the song very well. Arm was consistently moving which is always a good sign, some chord changes were a bit inaccurate which probably caused chords not ringing out fully - issue you will overcome by applying some more practice

You did well so give yourself a pat on the back from me. All the best.

Nice job sir and congrats on your first AVOYP post…it’s not a scary as it seems. Nice even strumming, a few flubs which you’d expect and a couple of times when I think you missed the strings BUT hey this is your first go and it sounded nice…anyone listening would know what you’re playing. Very nice tone on the guitar btw.

Thanks all for the kind words and encouragement and feedback. Thanks for taking the time to listen and comment!

Bravo my brother! You seem to already know where you need work so I have nothing to say about that🤘
When syncing audio and video, that right there is why I just go straight through my phone’s camera. I don’t really have the patience or the time to worry about all those details to get a solidly synced take. So my hat’s off to you for doing it!
I also commend you for counting and knowing when to change chords since that song repeats a lot. I’m also super proud of you for posting it regardless of a few bumps. That’s what we all should do. No one is perfect. Looking forward to more from you!

I think you will generally find it difficult to combine an original with midi. I know some of the members here, slice up and edit the original to try and get it more consistent in beat and tempo, or hand adjust note by note the midi. Personally I’d suggest do one or the other, depending on the song and what you can get done.

I have a general distaste for slicing up and/or time correcting audio (that’s not a condemnation of the practice – I’m sure it’s useful in some contexts – it’s just my personal thing). There have been some tracks I’ve worked on that started from a guitar chord progression or riff that I recorded “freeform” without a click and then wanted to add in MIDI instruments. In those cases what I tend to do is base everything off the “original” and enter the MIDI by playing the notes on a controller (e.g. keyboard, pads, or whatever) while listening to the “original” in my headphones. I think you get a more natural sounding result that way, and you avoid the need to fuss around with slicing and editing the audio. Of course, you have to “perform” the MIDI parts, so I guess that could be a whole different kind of obstacle. It’s a trade-off, I suppose.

Of course, you have to “perform” the MIDI parts

@J.W.C Thanks Jason. Performing the midi parts is another option. For me personally it would be beyond me to perform the drums and keys to do that … guitar is hard enough

Thanks Jason. Performing the midi parts is another option. For me personally it would be beyond me to perform the drums and keys to do that … guitar is hard enough

I hear you. And depending on the complexity of the drums or whatever it might be more trouble than it’s worth. But often it’s not that bad. You could record the individual drums separately, if you wanted to (just the kick, just the snare, just the high-hat, and so on), so you’d just be tapping the key or pad for that one piece of the drum kit. Bass is often just single notes, too.

Great job on your first post in here Al.

I thought it was a good effort and it’s always a good feeling to get the first post of yourself playing out of the way.

Good first AVOYP, Al. You managed to record some music with a nice feel to it. Well done.

Nice first recording!
Really jealous of your recording skills to be honest.
Is that an Epiphone Dot? If it is what a coincidence, I just got one as well, same colour and everything

Thanks! Am still learning but I enjoy that side of things and happy to try an answer any questions.

Yes it is the Epiphone Dot

I found it took me a while to get used to compared to a smaller strat style electric. I love the sound of it in the room and love the sustain on it. Enjoy!