Thank you! Yep that last Am chord trips me up every time, I’ve also tried the open Am and 5th fret full barre but they don’t tend to sound as good

Thanks for the kind words Roger! I’ve tried this on electric and my fingers keep getting stuck

Thanks very much David!

Vey kind of you Dave! Thanks for the positive feedback

Thanks for the feedback JWC. Yep, that descending line has been a real headache for me and I have tried to play it the way you’ve shown with little success, so I just tried to simplify it for this video but agree it sounds much better with the slide down the strings. Thanks for sharing the tab, I’m going to isolate that section and work it over and over.

So here it is, freshly recorded: 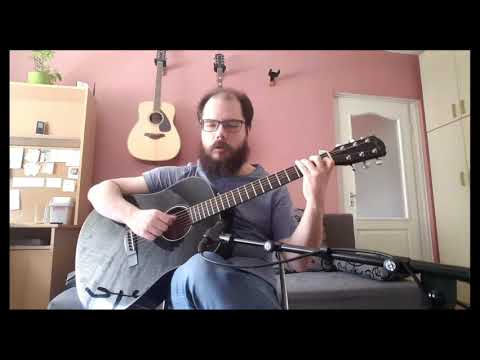 Apologies for the volume being a bit low, I tried to adjust it in OBS as much as I could.

I may give the song another try, but I don’t think I’ll be able to play it any better on camera today.

Your comments are welcome

7 posts were split to a new topic: Content Loudness and headroom when recording for YT

Very nice @Jozsef , all the notes ringing out clearly and fingerstyle very good (much better than my effort above

You have subtlety in the way you contact the strings and hold the chords down Jozsef. The effect is quite magical, mystical even. Many of the sounds have the smoothness of whipped cream and colours like the pink wall behind you.

Well done bud, took me ages to nail that last chord. Still struggle to get it clean.

Nice timing and clean sounding. Definitely one you can apply Justin’s ‘floating leaf’ lesson to. Hmm, what was the video called…

Thank you for the kind words

During my practice sessions I found the overall sound is more pleasant if I pick the strings a bit less forcefully, so that they will not ring out too much and create a blur. Maybe an advantage of classical nylon string guitars is that the notes remain sort of distinct from each other.

Actually, when my room was painted, the colours reminded me of a plate of sour cherry soup

Thank you, @liaty I’ve noticed that the new grade 3 lessons take a more holistic approach to playing, so I’ll definitely check this one. I tried to keep an even tempo that was neither too slow nor too fast (it felt much less than 2 minutes). Towards the end, after the C chords, I slowed down because those parts are so diffcult to get right with my eyes closed.

I mean, I don’t usually practice with my eyes closed, but last week I found I can pull it off with this one as it’s played in the same position almost all the way through. Normally, I can get that last chord perfect about 8 times out of 10 with closed eyes - well, this was not one of them

You played that very well Jozsef, it’s not an easy piece and you coped with it well, a bit more practice will make the difference between it being good and great!

You’re doing great, József. You’re playing this with good right and left hand technique, and I love how you closed your eyes and were really listening as you played. Just keep working the more difficult sections and you’ll soon have this flowing well. On the last “sliding up” part before the final chord, I’d suggest sliding from the C to the E on the second string (as you’re already doing), and then playing the A on the 1st string with a kind of roll or bar of your first finger, then the B with your third finger, and the C with your pinky. Then move your left/fretting hand up to play the final chord.

@Jozsef I feel personally invested in this ‘challenge’. For years this tune was my go to finger warmer upper and I must have played it hundreds of times, perhaps not always accurately and well!
You have all the ingredients and just need to serve up a tasty meal with some careful chef work.
Two things to commend you on. One or two small errors in the picking pattern did not cause you to stop. On the occasions when you did have to stop, you took your time and got the focus to pick up again. You played without looking - wow and goodness.
Work on seamlessly connecting the transitions. Slow things down so that you eliminate the pauses. I would suggest you do open your eyes and look for the sections which take you away from open position. They are so important and playing them correctly is far more important than a desire to try to play without looking.
Good stuff.

Wow Jozsef, that was cool

)
As for the piece- it’s sublime and you are on the right path to doing it proper justice. Keep at it and share the progress.
(My only nit: when discussing volume levels, I wish you and @DavidP would stick to the universally accepted scale of 1-11

Actually, this eye closing schtick was a relatively late addition to this song, kind of showing off

But it brought to mind this lesson: Feeling the Frets and I tried to rely on my ears when doing the slides.

Well, I’m at a stage where I have to warm up to play this song, but maybe eventually it will become a warm-up routine for me too.

I’ll definitely keep on working on it with my eyes open. There are some small sections where the tab seems a bit simplified compared to the original, e.g. before the change to the first C chord. Or maybe the tempo is what makes the difference. At first I thought that some notes played on the D string in the first and last section were also missing from the tab, then I realized that I just needed to play them with a little stronger attack.

At times I’m the polar opposite of zen, but I try my best to keep my cool when playing