Recently my wife reminded me that my birthday is in a couple of months and she asked me if I knew what I wanted gift wise. This got me thinking on some guitar accessories/licenses that I haven’t gotten yet that I may want.

I’ve been recording my AVOYP in one of 2 ways:

So I’ve been thinking of either asking for a decent mic to plug into my interface and record my amp or actually asking for a license to GuitarRig6 but I’m not sure which route to go.

I like my Katana a lot and have a footswitch that I use that can switch between the 4 bank slots that it has which is great for songs that change tone like Smells like Teen Spirit.

Despite GuitarRig6 not having a decent acoustic simulator, it still has waaaay more tone options than the katana does, I haven’t even explored half of what it’s capable and honestly if there was a way I could use my footswitch this would be the obvious option to take.

So what do you guys think? Anyone familiar with guitarrig6 know if you can use some sort of footswitch with it? If it has a decent acoustic guitar simulator hidden somewhere? Any downsides to micing up the Katana besides less tone options?

Which version of Katana do you have? If it’s the MK2, have you tried the latest firmware update?

Yup I have the MK2, though I haven’t updated the firmware yet.

It may be worth trying as it adds some basic IR capabilities to the USB recording which might improve your experience there.

I will add that recording your amp with a mic might not give you the results you are after. The recorded amp tone will be coloured by the mic type and positioning, as well as the acoustics of your room (and, to a lesser degree, the preamp in your AI) and so may still not sound as you expect.

Of course, that is the point of these controls in tools like Guitar Rig. Which is why I wonder if the addition of similar capabilities into the latest Katana update might yield better results for you.

Of course, that doesn’t give you all the tonal options you get with Guitar Rig. My personal view is, having gone through exploring such things a lot in the past, I don’t need all these options.

I have found, in practice, I have a base set of 3 or 4 amp tones that I then layer other effects over as I need. I can do that on the Katana or any other decent modelling amp.

I’ve been recording my AVOYP in one of 2 ways:

Hello, although i am a rank amateur at all of this i have come up with an AVOYP setup that I’m happy with for now. Whatever tone I’ve got coming out i get in the recording and i hit record and all of it comes together with backing track coming out of the amp if i want it, vocal and guitar. No post processing and assuming i did my part on the vocal and the playing I’m done. I usually trim off the front and the back of the video and that’s it.

A picture below shows the gear. The top left mic stand holds the web cam. The mic stand that goes across diagonally in the shot holds the dynamic mic that is off the frame. Condenser mic is in front of the Spark amp.

Both mics go into the 2i2 and the amp mic brings both guitar and any backing track via Bluetooth from my ipad (i use Justin’s Songs App a lot) .

The hub of all this is OBS on the pc; lots of threads on that here in the forum but really easy to install and set up. The 2i2 comes into OBS as one audio source for both mics but you control their mix from the separate gain controls on the 2i2. The only other source is the video from the web cam that you bring into OBS. From there all you do is bring up OBS get your mix like you want and hit record and a video is produced by obs in your pc with tone out of your amp. You do need to go into advanced settings for the audio source in OBS and check stereo on. And that’s it. Good luck in your journey!…Rod 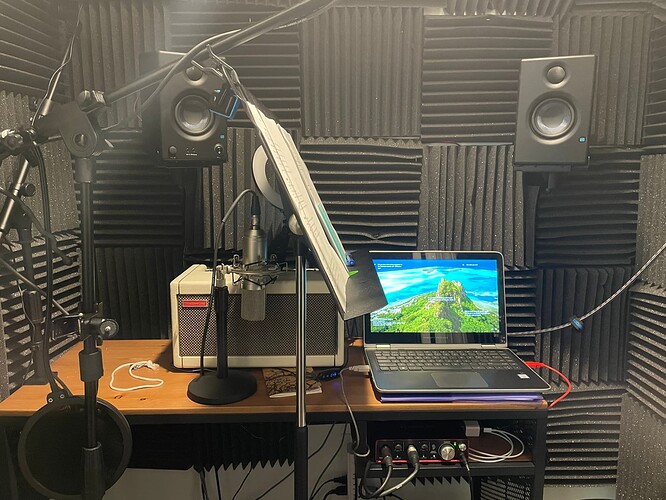