How did you learn your fretboard? Note names?

I would like to get to a point of being able to see the note on the fretboard and say this is such and such note.

So how did you learn your fretboard?

Long ago i learned the low E which also equates to the high E. I am pretty good with the E’s. It is the rest of the strings that i am not so good with. I use the octave method on some.

I can name all the open strings but if i am being asked by either justins app or myself what note this particular one is, i frequently have to work my way from the nut upwards. Not ideal. It works but is slow and is almost like using a crutch.

Justins app really tests you in some modes. You are not given a fretboard picture at all and are asked using words. Such as name the note on fret 9 string 3 for example. Or name all notes on fret 4 starting at string 1. Next question sould be the same but makes you start on string 6 going down. It really messes with your head. Its cool. Ive been using it every day and can see progress. I should add that you are also given the fretboard and told to name notes on other modes. Or the notes are given and you place them. The app is not at all solely a word game where you have to name the notes using a picture in your head.

Next i tried to remember certain letter combos. Like on the 7th fret going down it spells BEAD f#b. It helps a bit but still not ideal for me.

Then i tried using memonics. A D G C E A on the 5th fret going down got turned into AC/DC. Also not ideal but it does help as i now i have the complete 5th and 7th fret memorized.

Looking for blank fretboard sheets to print out, since i am pretty sure justin does not have one, i came across a site that suggested working on all E’s at first.

I am finding this a bit easier as i only have to learn the pattern of one single note at a time.

Buit how did you learn yours?

I learnt all my scale pattern using intervals. Once I have that
in my head the notes names really don’t matter.
After that the note names just worked their way in.
It funny how when you stop trying to learn something it comes
to you.
Learning the CAGED system also helped me a lot. Mostly with the
G and B string. The B has the root noots for D shaped triads and
the G has the root note for the inside A triads.

I did it pretty much the way Justin describes ie pick a note, play it on every string from string 6 to string 1 and back again. I would say the note name as I played it. I did the exercise with a fretboard diagram in front of me, so no mistakes. I’d repeat the up and down 3 times without a mistake before moving on to the next note. My sequence was the Circle of Fifths C - G - D etc

I spent 5-10 minutes doing this every time I picked up the guitar.

Idea is to not have to think, for one to just know.

I don’t do it every time I pick up the guitar now, but rather every now and then.

And I’ve found it helpful when doing improvs over a backing track. And doing the improvs helps ingrain it.

But I can see the benefits in the approach @stitch shared, will gain much more than just knowing the note names.

I started learning it by rote initially, with the bottom 2 strings, then extended the octaves from there. I utilised Justins Note Trainer app alot too for about 6 months - great app - plus you can use it anywhere, anytime, even when you’ve only got 5 minutes. It all adds up.

When I started learning scales and the CAGED system it helped things along further.

What really accelerated it for me specifically though , after 6-7 months of the above, were when I discovered triads. They really started to open up the whole fretboard for me, seemingly in a relatively short period, and allowed me to start seeing connections between chords, scales, and intervals.
I’m certainly no expert, and am still relatively early on in my journey, but what seemed nearly impossible 18 months ago is now starting to show some fruit.

I started off by learning the notes on the 6th and 5th strings. (Which also gave me the notes of the 1st string, of course). The next big step was the “play every X on the fretboard” exercise. I’d start with Cs, and then go around the circle of fifths (Cs, then Gs, then Ds, then As, and so on). Learning the triad positions also reinforced that. I guess CAGED did, too, now that I think about it.

One useful type of excercise is to choose a major scale you want to train and just play it over one string at a time saying notes you are striking out loud. You will be surprised how much it helps to improve your fretboard knowledge and how automatic it gets to hit the note you are targeting next time around.

Plus combined that with the Justin method of locating on each string and saying the name.
Nearly there, working progress but as Stitch says knowing the interval makes it easier and as long as I know the root name I can name the other interval based off of that.

For me it was first a mnemonic for the open strings, the Eddie Ate Dynamite one was quite evocative so it didn’t take long for me to learn the names of the strings. 2 of them are the same anyway.

The octave shapes also made my life easier + knowing that an octave of a note 1 string below is 7 frets up.

Then when I started to learn the major and minor triad shapes, the note names became less and less of a problem on the thinner strings as well.

Okay, this comment just made my get the finger out and watch a couple of Justin’s lessons on triads. (Man, it’s been a long time since I watched a lesson- I forgot how good they are

)
I now have another set of ‘doodling-to-do’ whilst watching TV !

I’m giving this a try to see how I get on. 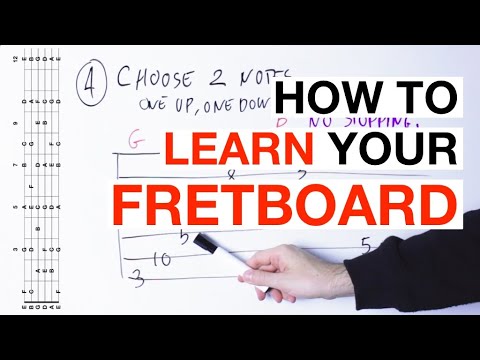 Buit how did you learn yours?

I am learning mine by randomly putting my right index finger on a string and fret and then saying the note name. I then check by using either the octave note in the root 6 or 5 power chord that matches where I’ve picked (for strings 4 and 3 respectively) or the C-chord shape (for string 2). This means you need to ‘just learn’ the notes on strings 6 (same as string 1) and 5.

(If how I’m checking doesn’t make sense let me know, and I’ll try to explain again!)

Some good and different suggestions here. The immediate ones to learn are on the 6th and 5th string are required for barre chords. Obviously string 1 is a repeat of string 6 so that’s a good chunk done. Then it’s a mixture of what JWC and Adi suggested really. That said I still find my mind reaching for the note names on 2,3,4 if and when I need them (which to be honest is not that often given what I mostly play).

I started by learning 1 string at a time to the 5th fret and then one string at a time from the 5th fret to the 12th fret, I then followed it up with the remainder. One of the things that people have mentioned is the Circle of 5ths and the C A G E D system; I see the importance of them but also I think that the Circle of 3rds is just as if not more important to learn. In all honesty, I still to this day cannot immediately name all note names on the fretboard. I think it’s really hard to get to that point (although I hope to get there).

For my 20+ years of playing I’ve gotten by with knowing (well) the note names of the E string and the A string… for the rest I’m mostly using my ears.

Only surprised once he has laid out C on 3rds from root to 13, he does not show all the diatonic chords can be stacked by their notes added vertically following the alphabet

I think that he may have been trying to avoid information overload, however you look at it, it’s a good way to start to learn about construction of chords. Also there’s no mention of sharps and flats in a second circle.