“I’m Yours” by Jason Mraz is an iconic ukulele diddy - and now you can add it to your own repertoire.

View the full lesson at I'm Yours (ukulele) | JustinGuitar

Absolutely love Justinguitar.com for both guitar and Uke. I have a question regarding the “D7” used in the video. The JG Ukulele Songbook (and other references) show the D7 as a barre chord over strings 2-4 in the second fret and then the third fret on the first string. In the video however Justin describes the D7 as the second fret only on strings 2 and 4. Is this just a different way of getting the same chord? 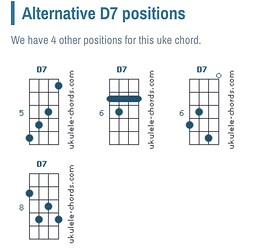 Hello @robi145 and welcome to the Community.

Good question.
This is the D7 you seem to know and understand:

The notes of a D7 chord are: D, F#, A, C
In that chord shape all the expected notes are present.

Here is the chord that Justin plays and presents as a D7:

And there is a slight problem right!
No Root note. The D is missing. Huh!

There is some deep theory that explains how a dominant 7 chord can instead be substituted by a diminished 7 chord one semitone higher in pitch.
Weird stuff, so I’ll keep it simple.
One semitone higher than the root note of D7 is D# so we look at a D#dim7 chord.
The notes of a D#dim7 chord are: D#, F#, A, C
Hang on … there’s something very familiar here.

Both chords share the exact same notes apart from their root. And because of the context of this single chord in this song - a chord that is allowed to hang, a pause, a bringer of tension that seeks release in a move back to the tonic chord and the diatonic progression, the root note is optional.
Strictly speaking, the chord Justin plays and calls D7 could have several names, its name and nature are ambiguous and very much subject to context. He could have equally called it a D#dim7 in terms of the function it plays as a tension chord that wants to resolve. Both would be valid.
In terms of using that chord shape as a D7 in more general play, it may not sound good and you would want to continue using the shape(s) that you already know as D7 chords which do contain their root note.