I’ve been doing a bit of research this morning as I’d love to capture both audio and video of me playing at the same time, ideally using my iPad. (9th gen - lightning port)

I’ve been trying to record just using the camera app but I have to turn my external amp up really loud to get the audio heard by the iPad’s built-in mic, which isn’t neighbour friendly in the slightest!

The iRig 2 HD looks like a good piece of kit that will connect directly to my iPad’s lightning port and, from what I’ve read, will allow audio to be captured in Garageband. No issue here.

But how do I record both audio and video at the same time? This bit has me stumped.

Ideally, I want to be able to record audio and video at the same time in say, the camera app, or another freebie/cheap app. Any ideas?

I think a necessary followup question is whether you playing an electric, acoustic or acoustic electric, that will determine if you need a microphone (and a audio interface that accepts a microphone as input).
Assuming you play electric, or acoustic electric, you can plug the output of your guitar into the iRig to record the guitar, and set up the iPad to record the video. Then in your DAW (Digital Audio Workstation) just match the timing gf the movie you recorded (with audio) to the guitar. Might be a bit tricky to get the timing perfect but if you turn up the audio of the movie track in your DAW, you should be able to match the ‘waveform’ of the movie sound to the guitar track.
You mention the iPad so you can GarageBand for free as your DAW.

Thanks. Yes, I wasn’t clear - this is to record from an electric guitar.

It’s the whole matching up of the video/audio thing that I’m trying to avoid.

I think that as long as Garageband is running ‘in the background’ applying effects to the guitar, that using the video function of the camera app will let me record a song in one take, capturing audio/video, with no post-capture editing required? Has anyone one tried this?

I’m not looking to make a highly polished music video - just a quick and dirty capture of my songs so that I can view them back and post them on here without them sounding like complete trash!

I am struggling with this as well. It seems like it should be easy but apparently it is not.

If you can make a little noise, your best bet may be to get an inexpensive external mic for for tablet and plop it in front of the amp speaker. Then you won’t need to crank it, at least.

@ZedExDM I think you are saying you want a solution where a simple video recording app uses the guitar input after being processed by Garageband for effects as the sound for a movie recorded using the built in camera of the iPad?
I’m not an expert on this but I don’t know if that software solution exists. You might be able to do it with zoom, but I don’t know if the iOS version of zoom would allow you to use a the output of the IOS DAW as inout to another iOS app.

Using just garageband, iRig and the iPad camera, I think you might be able to record a video with the iPad and have garageband record in the background but you would still have to combine the audio only track with the audio and video track from the video in Garageband (Note that this last step is not difficult.)

If you have a separate amp like @jamolay the easiest solution (if not the best sounding) is to just record a video of the sound live from the amp. You could ‘mix’ a vocal by strategically locating the amp relative to iPad and play with the volume on the amp.

Thanks both. I’ve bit the bullet and ordered the cheaper analogue version, the iRig 2. I think this will hopefully meet my needs quality wise and won’t break the bank at £25.

I’ll have a play next weekend and report back

I just gave it a go and seemed to work fine

Was through an iPhone 8 on a generic (cheap) tripod through a 3.5mm to lightning (generic) adapter to the iRig2 (set to Thru) to Guitar and Headphones. I think switching out iPhone for iPad should be equivalent.

I set it to allow run in background in GarageBand settings and I turned on input monitoring and adjusted the gain so the green/red dot by the mic pic stays green. I switched to the default camera app, video mode and hit record, saved and uploaded and all seemed ok and pretty easy.

Shout any questions but looks a really simple and easy setup. I like the iRig 2 - its so cheap and I’ve used in many different ways. I’ve also used it to connect headphones and guitar to Justin’s app and play through that way. 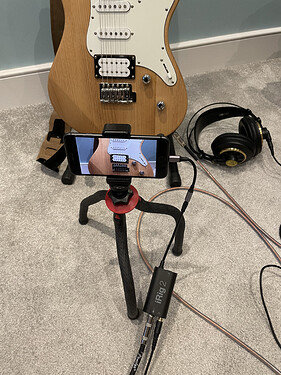 Your post deserves a medal good sir! Thank you! Exactly what I was looking for as I want to use it in this exact way.

You also get a bonus point for Mad World as this is what I’m playing at the moment and will be one of my first uploads!

No worries - I love this sort of setup stuff…

Enjoy and looking forward to hearing you play!

The iRig 2 turned up today and I’ve just spent the last hour or so playing with it.

No matter what I do, it’s got like a ticking/feedback noise in the background

I’ve systematically eliminated everything, cables, iPad (tried on iPhone too), etc, but still, that horrible ticking noise all the time. Bluetooth and WiFi off. No other power sources nearby, etc. I’ve tried everything

I’ve had about enough of it now that I’m about to box it up and return it! Not sure if I’ve got a dodgy unit or if I’m missing something?

I tweaked the gain up and down (iRig unit and in Garageband), played with all sorts of levels but that ticking noise is forever present in the external amp, the headphones and the recorded sample.

The ‘thru’ mode seems to work, but I couldn’t emulate what you did with Garageband in the background and recording the altered version in camera app automatically. I tried on both thru and fx mode. Both had that horrible clicking sound but I could only seem to record the standard sound, not the altered sound.

I reckon it’s a duff unit.

I sent it back - I’m adamant it’s a duffer! I’ve ordered the iRig HD 2 now so will report back when that arrives…

The iRig HD 2 turned up this morning and the difference between this and the faulty unit I had is night and day!

Process:
Hit record in Garageband, then switch to Camera and hit record there.
Play a tune (badly!)
Stop both recordings.
Open iMovie and bring in the video, separating and deleting the original audio.
Bring the GarageBand recording in to iMovie.
Swear and curse while syncing the audio to the video!
Export the finished movie, after applying a vintage filter and trimming the start and end.

I will add that no matter what I tried, I couldn’t replicate your setup @grayal of the processed sound being captured in the camera app. I can only assume that this is an iPad limitation as I tried several apps ‘running in the background’ but it would only ever capture the clean signal from the guitar. Bizarre!

Swear and curse while syncing the audio to the video!

When I’m syncing video and audio it helps to have a clap (or short fast strum) at beginning of video to match them up. Then edit out once aligned.

I did try that, but like an absolute wally, I forgot that the guitar sound was being captured, not clapping sounds

Muted strums are nice and sharp……

Not familiar with iMovie, but if you can sync up both audio streams before deleting original….

That’s exactly what I did in the end. I matched up the waveforms and then delayed the audio a little as you see things before you hear them and it kinda works I think. Then deleted the original audio. A bit fiddly, but after a couple of tries, I’ve sorted it now

Glad you have a work flow that is now working, Zed, and the sample sounded good, was well sync’ed. Now I can look forward to you rocking out!