Linking the minor pentatonic positions together

So I’ve now got a starting palette of 25 licks to choose from and modify as I want (5 licks in each of the 5 patterns/positions). Fantastic!

The immediate question in my mind; is there a ‘typical’ sequence in which these licks are used in a 12 bar blues song? (I carefully used the word ‘typical’ rather than ‘standard’ as I realise that there are no rules, but guidelines are really helpful)

Also when the 12 bar cycle repeats for a guitar solo for example, would this be a good time to move up the neck? And where would be make sense to link patterns in the turnaround?

Any guidance much appreciated!

Welcome to the Community, Steve.

Congrats on getting the licks under your fingers.

I’d suggest looking at great players playing solos. That’ll help you get into the feel of things.

I’m not much of a lick library type of player, it’s another way of playing by rote, and I work to avoid typical approaches when it comes to playing lead. I primarily look for entry and exit points in the chord progression, building and releasing tension, as well as establishing homebase then moving away, making a stop or two along the way and then returning home. Add space where you can as well. The chord progression will map the journey: 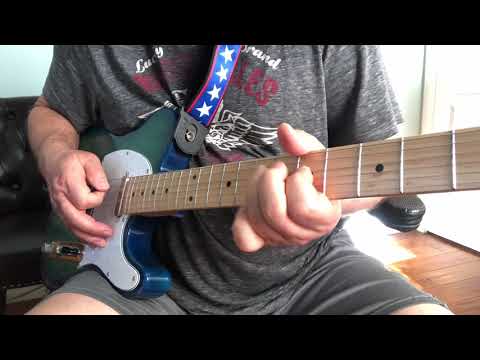 Have you been using the licks, seeing where they fit, playing pattern 1 with 2, 2 with 3 and 1 etc. Its all about discovery not following the map. Why start at 1 ? Why not 3, then go 2 then 4 then 1 then 3 then 5 ? Experiment. What licks sound good in adjacent patterns ? Are they easy to change from one to another. Look for call and answer licks.

As @DavidP said look at the great. Just don’t start high, as there is nowhere to go, that’s where to finish. Find your style.

I don’t know if there are any guidelines but what I noticed is most stuff has a root pattern for much of the song with occasional forays into other areas, but they don’t jump around a lot, more stick to a pattern and add the odd bit of spice.

The turn arounds they typically spice up the licks in the same position, sometimes this involves a change in neck position but not the rule.

I think where you start is more down to how you want to sound.

Other stuff I can think of is typically rooted to one pattern with a foray up 1 and down 1 from that pattern.

The most dynamic piece I’ve tried (and I use the word try) is Slow Dancing in a Burning room where much of the song moves between two patterns with the odd hop two patterns higher up the neck.

So I’d say (as a beginner) stuff seems to be centred around 1 or 2 patterns with the special licks left for the turnaround, but usually still in the same position Adding in additional patterns is usually the sugar coating which you don’t want to go overboard on.

Thanks all. The main message seems to be to keep it simple so I’ll focus on a couple of positions only and see where that takes me