David you are getting it my friend !!

6th fret on the E string then it would be a flat second? Yep but also a sharp Root or 1st not that you’d call it that

And if you played the note on the 9th fret on the E string it would be a major third 3 for 3 You could slide up to the D shape Pattern 2 hitting that 3rd opposed to playing it 5th string fret 4.

I knocked this diagram up a while back as I was working off an E minor backing track but wanted to incorporated notes from the G Major scale. As you can see the same pattern exists for each pair of Major and minor pents but the Pattern number and shape name (as in EDCAG) is relevant to the root. So the E shaped E minor pent with its root on the open 6th string, becomes a G major pent with its root at the 3rd fret, same shape - that b3 of the minor scale being the G Major root. And hence we complete the circle

So if you happen to be jamming over a happy jolly country backing track, know the Key but think you don’t know the Major Pent for it. Find the root note on the 6th string, slap your pinkie on it and play the E shape Pattern 1 minor pent and bingo sorted,

Does that make sense ? I should also thank @stitch as the source for a lot of the info here, that now sit between my ears, as he taught me well ! 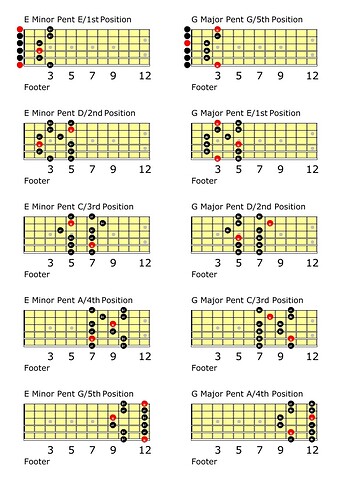 So that 7th of the natural minor scale would be the 5th in the Major scale, a whole tone down from the 6th, so it becomes a b7 as the 7th in the Major is only a semi-tone from the root. Also that flat 3rd is the root of the Major scale. So using that same E shaped pentatonic but calling the flat 3 rd root you get the Major Pentatonic.

Now the eyes are glazing over. I need to read it s-l-o-w-l-y, think about it, perhaps write it out to be able to compare.

But not now, just finished watching the acoustic string change video and need to go change strings on my acoustic (the strings on the guitar are well beyond legal retirement age

). Do the change now and all should be well played in for the upcoming OM!

No worries, this stuff takes a long time to sink in and then you get a eureka moment and the door opens up to a world of goodliness. Always here to help if its within my limited realm of experience and understanding.

I sure do appreciate you being willing to take the time you take to share your knowledge, Toby. It may be limited but it’s all relative, my own realm is yet more limited

Missed this Toby and it’s already a mammoth topic.
Playing one lick and extracting all the juice and goodness you can from it in a few positions is a great way to develop.

It puts me in mind of another old-forum article I wrote which is another on the list of things I need to migrate to here. Taking the first steps in Improvising / playing Blues Lead Guitar

3 posts were merged into an existing topic: Bending Technique In Blues

Thanks for that, I really struggled fitting in Justin’s Pattern 1 licks over BTs but did just that with the Pattern 2 and Blues licks and had started with the P3 licks a good while back.

Along with revisiting Justin’s Blues Lead in parallel I am working on the licks in the “third party” lesson/video @CT shared. So under the Technique umbrella I’ll add some new licks to learn each day or so and during my Impro session I’ll play each individually with the associated backing track (lots of different keys

) So I might work through say 8-10 licks each with a BT around 3mins. Really helps get them into fingers, ears and head. Then once I’ve have it in my head I go Root hunting and find where else I can play them and add that to the Impros.

So like this project, the plan is then to combine 3 or 4 or 5 licks into a common key and do another recording in this fashion. Then keep the process rolling and building a reasonable library.

Along with every thing else and because after all these years I have just been gifted Open Chords Up The Neck, I want to drop a few rhythm sections into the impros as well !!

Hey now! That was a really good go at it. The chops around 1:09 were pretty doggone sweet. Thar be some blues, matey!

I took that backing track for a spin a while back while giving my new pickups a try: Cool vlog, and great idea to explore some blues licks! Sounds like you’re making good progress.
From the video I can’t help but wonder if you are using the most efficient/appropriate hand position for this style of music. Looks like you have a bit of a “legato style” grip, with the fingers coming down towards the fretboard very much from above. Great for legato and lots of hammer-on / pull-offs… but hard for bends. Also those signature “blues curls” will probably be harder for you. Looks like you have fairly big hands… I would expect to see your thumb wrapped around the neck a lot more

But only you can tell if it feels comfortable or not to play those licks!

Thank you I appreciate the feedback and any advice on offer. I have not got particularly big hands, bottom of palm to top of middle finger is 18cm and mid knuckle to tip is about 10cm. I struggle to hook my thumb over and fret cleanly (Hendrix chords). Could never mute the 5th string while fretting the say GBe.

I’ll have to look at the video and see what I am doing wrong but from what you suggest, my fingers should be more parallel to the fretboard ie flatter. Is that a fair assessment ? I’ll be doing some lick practice later this evening, just memorising repeat licks over some BTs, There are a few with tone bends so I will bear that in mind. I find it difficult to pull/flick off effectively when my fingers are flatter which may cause me to take a more angled approach. So I might just focus on one or two licks and work on more effective finger placement.

Well at least its sounded ok ?

Sorry Clint had to wait to play your jam. Hey that all sounds familiar, so I might be on the right track. There will be more to come from Corey’s lick list, as I mentioned in the diary. Learn em, work em, record them with some others from Justin thrown in the mix. Haven’t a scooby what I did at 1:09 so I’ll check that, when I see what my fingers are up to, following Kasper’s obsefvations.

Your mojo back yet ?

I also cannot do the Hendrix chord grip, as you say getting that 5th string is hard that way!
But otherwise, yeah, I think you got it right. At least that’s how I think it looks when I play. This stuff is hard to explain though, and also personal I guess. But however you look at it I think your fingers look a bit more “claw like” than I think they should. Wrt the bend, a good way to test is also that the bend and vibrato should not come entirely from the fingers, but is really a mix of finger and a “rocking wrist” motion. As I say, hard to explain… if everything else fails I can try to follow your example as use video as a form of communication…

But yes - which I should oc have mentioned first - it sounded good to me!

After reading Kasper’s reply I went back and watched your video again. I did notice your
fingers being curled up and thumb behind the neck.
When you started doing some bends your thumb does creep up over the top a bit but you
finger are still bent quite a bit.
To get a full tone bend your going to need to flatten out your fingers and hand and use your
wrist as leverage.

Justin has a good video on using your wrist Thanks guys, that lesson brings back memories. Funny if I just practice bends (I did a session this morning) my fingers were flatter and the wrist was more active, because I was focused on the required pivot and just the bend (no other notes, runs etc). So I need to be more aware of that when jamming over a BT. So I guess take it slow and steady, where have I heard that before !

May collect more video evidence before the next Blues chapter comes out !

I think it’s you’re use to not muting the next string when playing chords but when playing
lead you want to have the ability to mute other strings or let then ring if needed.
This means flattening the fingers more.

Cheers Stitch will see how it goes tonight !

@TheMadman_tobyjenner Ah, The Madman takes on the blues and is sounding good, with a plan in mind to bring us more goodness. I wish I could get as disciplined as you, Toby. This is an inspiration. TFP

I think Toby while you are getting into Blues licks playing over BT etc it’s invaluable to pick some blues songs and learn them throughout as well, doesn’t have to be Pride and Joy straight away but some easier stuff where you have plenty of tasty licks and you can pick up some ideas as well to incorporate into your own stuff. Just a thought

I’ve been listening a lot to BB, Freddie and Albert amongst others and looking for suitable songs, Bad Sign, Crosscut Saw type thing but also seeing/hearing the influences in Led Zep (eg Killin Floor/Lemon Song cross overs etc), Pete Green, Rory Gallagher, Eric the Shredder Clapton etc to a greater degree and tying things together with the old masters. And now recognising licks in my go to Southern Rock collection. Next figure out what to bend in the Major Pent !!

Pride and Joy is on the long term list but a good start from a rhythm perspective. Found a great compilation on Spotify, Blues Classics with 70 tracks that fall into my radar !.

So in these early days of building the lick library up, I am collating material for full songs inc vocals. As I said somewhere here (I think) plan is to add rhythm, lead and vox and not multitrack. So yes covers are planned but I want to get the mechanics right to start with.

Your mojo back yet ?

Thanks for asking! Things are coming around slowly. My antennae are up and starting to pick up some vibrations.

Hint: Looking at some interesting new entry points into approaching improvisation. One is kind of a no brainer (wonder why I hadn’t thought of it before) and another is something fairly technical. Something just might click soon. Just need a cool loop or backing track to fire up the engines.